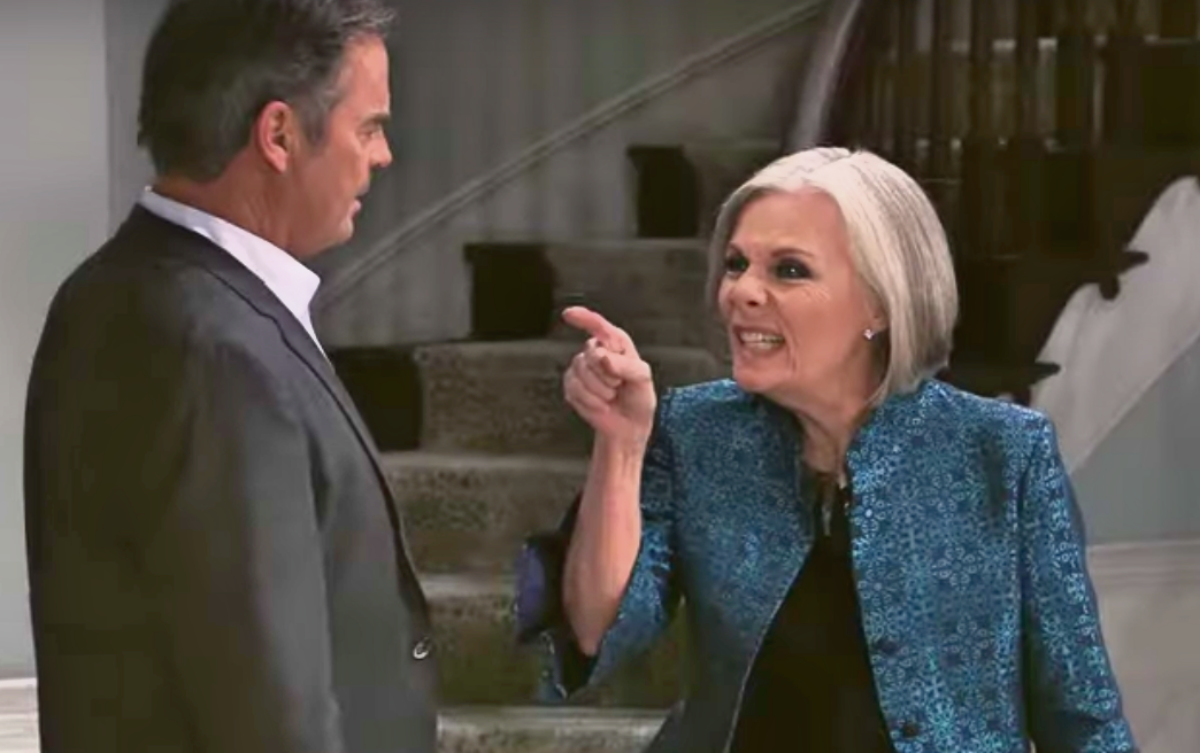 Ned and Tracy want Nelle gone. Nelle tells them she’s not going anywhere. Nelle says she was invited. Nelle tells Ned and Tracy that she has full rights and privileges to the house. Michael Corinthos (Chad Duell) arrives with Sasha Gilmore (Sofia Mattsson) and tells them Monica Quartermaine (Leslie Charleston) agreed to let Nelle stay. Ned is not happy that Nelle is there.

Ned thinks a warning would have been nice. Tracy says she’s going back to Amsterdam. Ned says Nelle is nothing he can’t handle. Ned plans to have Nelle begging to sell in no time. Michael and Sasha discuss breakfast. Nelle is shocked that Michael has asked Sasha to move in. Michael tells Nelle she’s moving to the boathouse.

General Hospital Spoilers: Nelle Needs An Ally At The Quartermaine’s? Will Brook Lynn Take The Bait?

General Hospital’s Michael is on the phone explaining why Nelle is there. Jason Morgan (Steve Burton) and Carly Corinthos (Laura Wright) watch as he handles it. Carly says they need to find out who is after their family. Jason says they have a lead and are working on it. Jasper Jacks (Ingo Rademacher) tells Sasha that Michael’s loyalty sometimes gets him into trouble.

Jason assures Carly that this will happen again if they don’t find who is after them. Carly tells Michael to remember that Sonny Corinthos (Maurice Benard) will end this. Carly asks how Sasha is handling this. Jax wants to talk about Jocelyn Jacks (Eden McCoy). Carly tells Jacks to back off. Jacks says Jocelyn is his daughter, not Sonny’s. Jax wants Carly to take the girls and leave Sonny’s. Sonny walks in as Jax says this. Jax wants Sonny to roll over and go into witness protection. Jax asks if Sonny isn’t tired of all this yet. Jax asks how many more people need to die. Jax says this isn’t over as long as Jocelyn is living there Sonny assures Carly he will handle this.

General Hospital’s Sonny is talking with the gunman who was held at the warehouse. Sonny’s hitman keeps trying to beat information out the shooter. Sonny calls Jason to come to him. Sonny goes home to find Jax going at Carly. Jax isn’t leaving until they get some things straight. Sonny will handle Brando Corbin (Johnny Wactor) himself. Sonny will protect his own no matter the cost. Jax offers Sonny a way out. The hitman has taken out Sonny’s man and gets into a shootout with Jason.

General Hospital’s Jason calls Sam McCall (Kelly Monaco) to check on her and the kids. Jason tells Sam to tell Scout Morgan (Ella Ramacieri) and Danny Morgan (Porter Fasullo) he loves them. Sam gets in touch with Damien Spinelli (Bradford Anderson) and needs his help. Hamilton Finn (Michael Easton) stops to talk to Sam and the bodyguard stops him. Finn says Laura Webber (Genie Frances) will be ready to find out who is behind this when she gets well.

Sam suggests Sonny may get to them first. Finn questions Sam about last night. Sam gives Scout her headphone. Sam tells Finn this is a part of her life. Sam explains this is his life now too because of Anna Devane (Finola Hughes). Sam explains to Finn that Cassandra Pierce (Jessica Tuck) was her cellmate. Finn can’t be doing that anymore because of Violet Finn (Jophielle Love) to thank about. Sam tells Finn how excited the kids were when she got home. Sam says as a parent you want to give kids that best possible life you can but sometimes you can only do so much. Sam says what effects the kids more is how much we are there for them and who we allow in their lives.

Sam asks Finn if he believes that Peter August (Wes Ramsey) was involved in the attacks. Finn tells Sam she needs evidence to back up her fears. Sam lays out everyone who has been targeted that was involved in this. Sam tells Finn they are working on taking Peter down. Sam accuses Finn of wanting evidence to warn Anna. Sam tells Finn if he thinks his daughter is in danger to choose wisely. Sam calls Jason and gives him a heads up about Finn’s concerns. Jason shoots the hitman who finally gives up a name.

General Hospital’s Finn leaves Anna a message that he will be home soon. Anna is tied up and Peter August is playing like he’s the bad guy. Violet comes in and shoots him. Anna thanks Peter for playing with Violet. Peter thanks Anna for helping him. Anna tells Peter he doesn’t owe her anything. Peter tells Anna she bought him some time. Anna says she would expect the link to be discovered eventually.

Anna got rid of the evidence against Peter. Peter thanks her Anna says Peter shouldn’t have to defend himself again. Peter is worried about Jason. Jason blames Peter for Drew’s disappearance and the attack on Franco. Finn talks about the changes in Violet’s life. Sam says Scout used to ask about Drew but doesn’t anymore Finn asks if they had confirmation why Drew’s plane went down. Sam thinks Finn would have more access to it.

Sam tells Finn it was a coordinated attack on Andre Maddox (Anthony Montgomery) and Drew Cain (Billy Miller), it was a coordinated attack. Finn thanks back to the conversation with Anna. Finn says Anna doesn’t share too much with him. Sam thinks Anna would be honest unless Peter was painted in a bad light. Anna tells Peter she tried to reassure Jason. Anna did her best to talk Jason down. Anna tells Peter to be careful. Peter says it’s a matter of time before Jason comes after him. Peter doesn’t want to risk a repeat of the night on the pier. Peter asks Anna to let him go if this becomes a problem. Peter promises Anna she won’t regret this