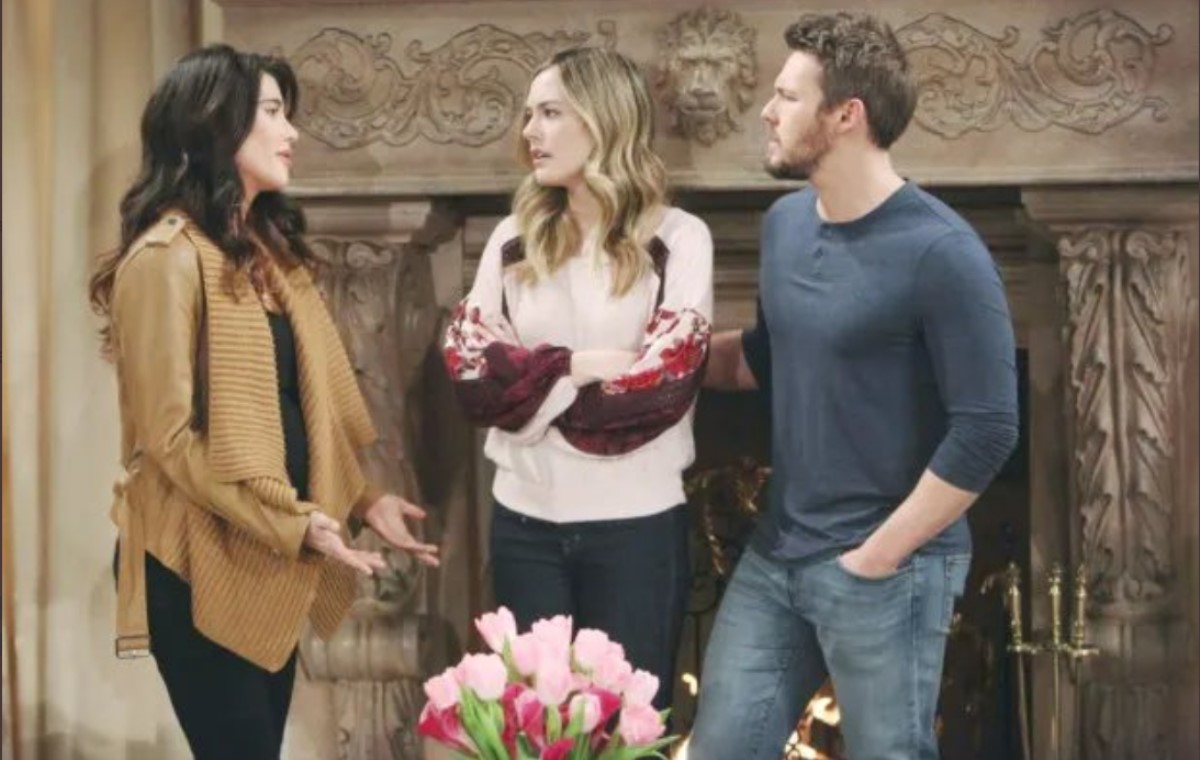 The Bold and the Beautiful spoilers for Thursday, February 6, tease that Thomas Forrester (Matthew Atkinson) will be horrified as Steffy Forrester (Jacqueline MacInnes Wood) is about to blurt out the truth to Hope Logan (Annika Noelle) about how her kiss with Liam Spencer (Scott Clifton) came about. As B&B viewers know, Steffy started feeling terribly guilty while Hope was rambling about how devastated she was to have seen that kiss.

Steffy is now about to tell Hope that Thomas orchestrated the whole thing and that she helped him by kissing Liam right on cue. But given that Thomas is standing right there with Steffy and Hope, it’s likely that Steffy won’t get her confession out. B&B viewers will have to tune in on Thursday to see whether Steffy will admit the truth to Hope or whether she’ll be interrupted.

However, given that it doesn’t look like Hope will be hearing any shocking news on Thursday’s B&B episode, it’s likely that Steffy will probably get interrupted before she can spill the beans. The Bold and the Beautiful spoilers say that Steffy will end up spending some family time with Liam and Kelly Spencer (Zoe Pennington) later in the episode, so It doesn’t look like she’s going to be involved in a big blowup with Hope and Thomas.

At any rate, B&B viewers can expect to see some nice scenes between Liam, Steffy, and Kelly as they spend time together as a family. And that’s not all that will happen. B&B spoilers also say that sparks will fly for Liam and Steffy as they’re enjoying their time together and that they’ll end up sharing a sweet kiss. And this kiss won’t be part of some grand scheme; rather, it looks like this kiss will be organic and mutually initiated.

Meanwhile, on Thursday’s new episode of B&B, Zoe Buckingham (Kiara Barnes) will find herself with someone new interested in her. As B&B viewers know, Zoe has been involved in an intimate relationship with Thomas for a while now, but that hasn’t stopped Carter Walton (Lawrence Saint-Victor) from noticing her and doing a little flirting here and there.

Of course, Zoe might think that she’s in a bonafide relationship with Thomas, but B&B viewers know that Thomas is really just using Zoe as a pawn in his plan to get Hope all for himself in the end. It all started when Thomas wanted Hope to work with him on Hope For The Future, and he knew that she wouldn’t agree to it unless he was dating someone else. That led him to pursue Zoe, and the two have been a couple ever since.

The Bold and the Beautiful Spoilers: Liam Meddles in Zoe’s Relationship – Says Thomas Using To Get Hope https://t.co/UGJMfaz5V5 pic.twitter.com/ULFjSy7Poo

Well, Zoe’s under the impression that her relationship with Thomas is real, but it looks like Carter will question that. According to B&B spoilers, Carter will interact with Zoe on Thursday’s B&B episode, and he’ll tell her that she’s beautiful and offer her some compliments. Go, Carter!

However, it seems that Carter will have some questions for Zoe. He’ll wonder about her relationship with Thomas, which will leave Zoe having to answer some pretty tough questions, probably about Thomas’ prior feelings for Hope. It will be interesting to see how Zoe reacts to all this, and whether there’s any chemistry between her and Carter in the end.