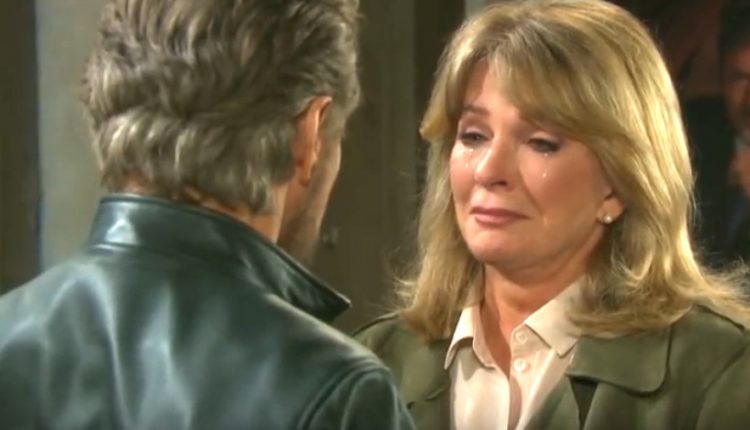 Days of Our Lives spoilers reveal Dr. Marlena Evans (Deidre Hall) will become desperate to save John Black (Drake Hogestyn). Could she make a deal with the devil? Is it possible to save the love of her life that she will sacrifice herself and willingly become Stefano DiMera’s (Stephen Nichols) Queen of the Night? Keep reading to find out more about this storyline.

DOOL spoilers confirm that Marlena is told the same thing as John, that the other is dead. However, Marlena learns the truth at some point. It is indicated that she makes a sacrifice in order to save John’s life. It isn’t revealed how she finds out the truth, but she is in a dangerous situation and so is her husband. What makes it worse is that neither John or Marlena knows if the other one is okay or not.

While Princess Gina (Kristian Alfonso) is holding Marlena hostage, “Steve-ano” and Dr. Rolf (William Utay) have John chained and left hanging from the ceiling of a dungeon-type room. At one point, Dr. Rolf tried to convince Stefano to kill John. But he knows if that happens, then he risks losing Marlena. He’s not ready for that to happen.

Days of Our Lives spoilers reveal that Stefano considers Marlena to be his Queen of the Night. This goes back quite some time in history and it is what the black onyx brooch means. It is a symbol of that, just like Stefano’s ring is part of his identity.

His goal is to give Marlena the life that he thinks she deserves. A life of luxury and seeing the world. However, all Marlena wants is John, the rest of her family and her friends.

DOOL Spoilers – A Deal With the Devil

It is teased that Marlena will make a deal with the devil in order to save John. She loves him so much that she is willing to become Stefano’s Queen of the Night so that John may live. However, Marlena should know better than anyone that making deals with Stefano is never a good idea. How will this storyline end? Fans will have to keep watching the NBC soap opera to find out.