The Bold and the Beautiful’ POLL: Should Steffy Seek A Steam Reunion? 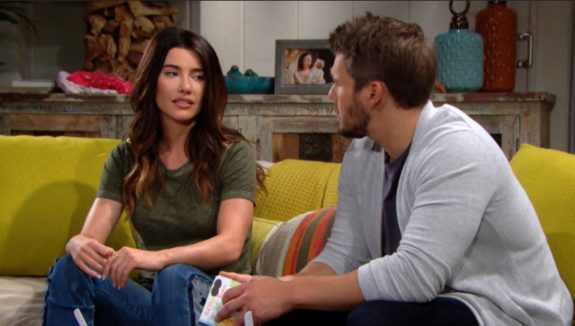 Steffy Forrester (Jacqueline MacInnes Wood) has been through the wringer on ‘The Bold and the Beautiful’. Now, it appears as though she has an opportunity to revive a relationship with Liam Spencer (Scott Clifton).

Rather than asking what Hope Logan (Annika Noelle) needs, or wants, as has often been the case in recent months, B&B fans are being asked whether Steffy should seek a ‘Steam’ reunion?

There are considerations to be made before she either proceeds or declines to do so. The greatest factor involves Liam’s child, whose name isn’t Beth Spencer (Madeline Valdez and River Davidson).

Hope is concerned not only with the daughter (Beth) she had with Liam, but also the son (Douglas Forrester, as played by Henry Joseph Samiri) Caroline Spencer (Linsey Godfrey) had with Thomas Forrester (Matthew Atkinson). That makes sense and reflected a huge amount of plot time that has been taken.

Kelly Spencer (Zoe Pennington and Allison Marcia Sweeney) was living with her mother and father before Steffy decided to tell Liam to return to Hope. Wood’s character made the selfless choice because of her love for Liam and belief that it would be best for him to reform ‘Lope’.

Steffy went on to be with Kelly the overwhelming majority of the time, with Liam being present whenever his obligations to Hope and Beth were handled. Steffy’s sacrifice was one that many might not have made.

The Bold and the Beautiful Spoilers: Liam Meddles in Zoe’s Relationship – Says Thomas Using To Get Hope https://t.co/UGJMfaz5V5 pic.twitter.com/ULFjSy7Poo

The issue with Steffy following her heart is that it’s been wounded, or broken on other occasions in the past. But rather than trek back to the beginning of this love story and reconsider the strikes against her or Liam, a consideration of the current era is what matters now.

Yes, there were issues between Steffy and Liam that led to breakups in the past. However, the time when ‘Steam’ became a family matter more than way back when.

If Steffy chooses to seek a reunion with Liam, she’ll be doing so knowing that Kelly, rather than just Steffy herself, would be negatively impacted by any subsequent breakup. Liam’s history of waffling would surely damage his daughter if ‘Steam’ ends again for whatever reason(s).

The Bold And The Beautiful Spoilers – Going In Another Direction

Liam is a good man and will surely support both of his daughters during his entire life. But Steffy’s love for him doesn’t necessarily mean that she wants to seek a renewed relationship, even though the realization of that would aid their daughter, Kelly.

Steffy chooses to remain single a few years ago and could do so again. She could also stay close to Liam, but not seek to reconcile ‘Steam’ immediately. Steffy could also wait to see what comes her way romantically, meaning that another man could be in her future.

Fans of ‘The Bold and the Beautiful’ rightfully express their opinions on a regular basis. So, should Steffy seek a ‘Steam’ reunion? Please vote in our poll!