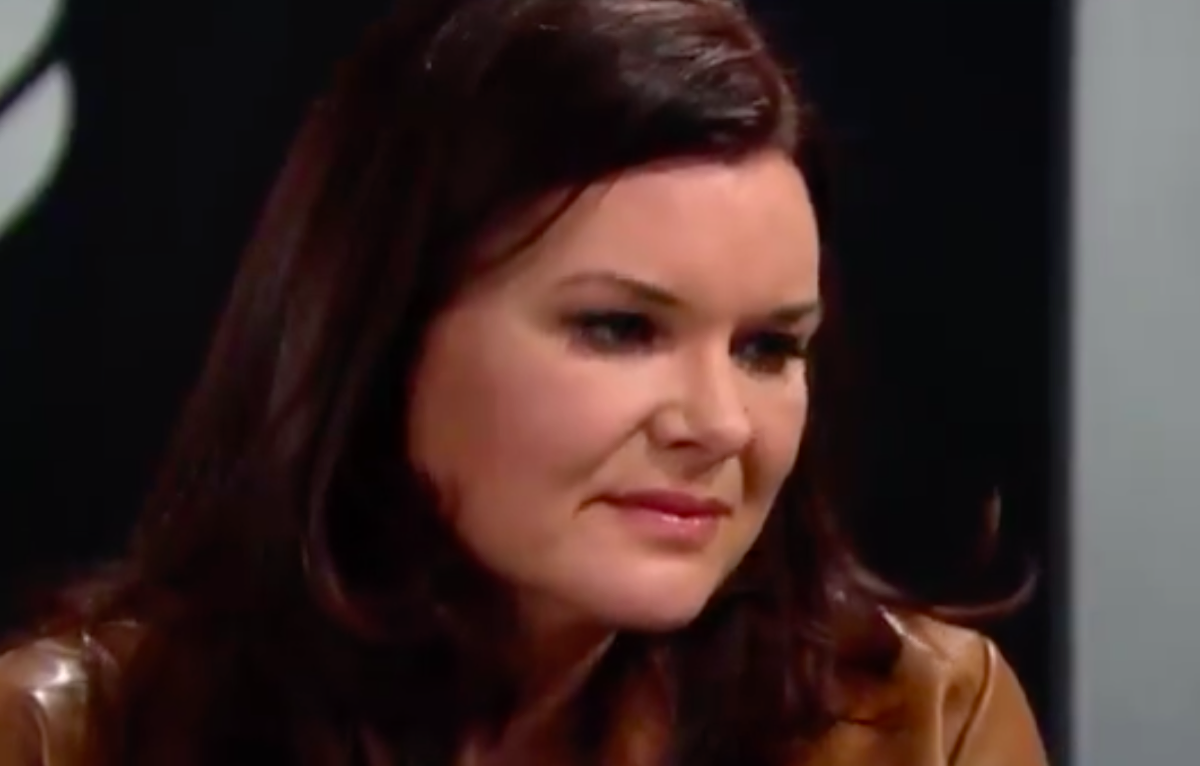 The Bold and the Beautiful spoilers for Friday, February 7, tease that Katie Logan (Heather Tom) will be feeling enchanted and quite loved. As B&B viewers know, Katie went through a harrowing ordeal last year when she was told that she was in total kidney failure and needed a donor kidney to survive. Things got right down to the wire and she nearly died when a donor kidney couldn’t be found, but then Flo Fulton (Katrina Bowden) got tested and thankfully was a match for Katie.

Well, Katie seems to be back to her normal self now, and she’s up and around and very thankful to be alive. And even though B&B viewers hadn’t seen much of Katie lately, it seems pretty clear that Bill Spencer (Don Diamont) and Will Spencer (Finnegan George) have been taking good care of her and have helped greatly with her recovery.

The Bold and the Beautiful Spoilers: Wyatt Learns the Truth About Sally From Katie – Will He Change His Mind About Flo?

B&B spoilers say that Katie will spend some quality time with Bill on Friday’s episode and that she’ll be completely taken by his attentiveness. He’ll apparently be demonstratively nice to her and shower her with affection. As B&B viewers know, Bill turned over a new leaf last year and abandoned his old persona. He had really made his life a mess there for a while, having estranged both his sons Wyatt Spencer (Darin Brooks) and Liam Spencer (Scott Clifton), and nearly losing Will in a custody battle with Katie.

But on Friday’s episode of B&B, it seems that Katie will be thrilled about the attention and devotion that Bill showers her with while they’re together. Katie may still be worried about Sally Spectra (Courtney Hope) and her health woes throughout all of this, but it looks like she’ll take some time to appreciate her relationship with Bill and the remarkable second chance she’s been given at life.

Meanwhile, on Friday’s new episode of B&B, Wyatt will decide that enough is enough. As B&B viewers know, he’s attempted to reach out to Sally on several occasions now, but she hasn’t been texting him back or giving him the time of day. Wyatt doesn’t really understand where they stand, since he tried to break up with her and she essentially refused to discuss it. Wyatt would probably appreciate knowing what’s going on, and he’d surely like some closure.

Days of Our Lives Spoilers: Chad and Abby Get Trapped Inside Princess Gina’s Lair – Shawn Tries to Get Through to His Mother https://t.co/BQuW1zxFp3 pic.twitter.com/lV0LYtZmy4

In addition, Wyatt feels terribly about the pain that he’s caused Sally. He knows that she was highly stressed when he tried to break off their engagement and go back to Flo. But Wyatt doesn’t know that Sally is facing serious heal issues that are on her mind 24/7.

Well, according to the Bold and the Beautiful spoilers, Wyatt will show up at Forrester Creations to see Sally and see how she’s going. It looks like he’ll think that if she won’t return his messages and face him, then he needs to go face her directly. However, it doesn’t appear that Sally will be receptive to him at all, as B&B spoilers say that she’ll immediately shut Wyatt down when he wants to offer his support and say that he cares.

Now, whether Sally will have received the devastating medical diagnosis that B&B spoilers say she’ll be getting at this point remains to be seen. But either way, B&B spoilers are clear that she’ll reject Wyatt’s offer to talk and have an emotional conversation. Of course, this will probably worry Wyatt even more than he was before. He’ll probably chalk it up to her not wanting to face the breakup, but there will be a lot more than that going on.