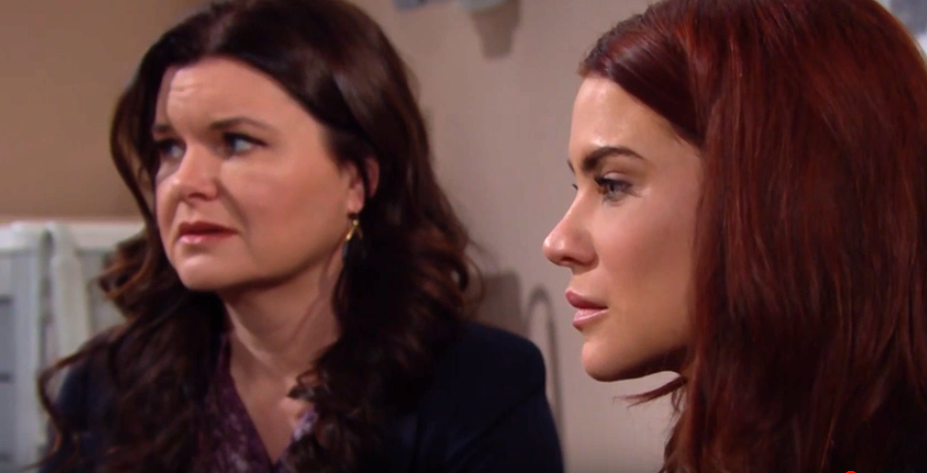 The Bold and the Beautiful spoilers for Monday, February 10, tease that Sally Spectra (Courtney Hope) will wait anxiously for her diagnosis. As B&B viewers know, she’s currently meeting with Dr. Escobar (Monica Ruiz), who has the results of Sally’s recent tests. Sally has just asked Dr. Escobar what’s wrong with her and whether she’s going to be ok.

Sally’s been struggling with some terrible symptoms lately, including shaking hands, dizziness, and nearly fainting on several occasions. She even called Wyatt Spencer (Darin Brooks) by Liam Spencer’s (Scott Clifton) name at one point, which indicates that she may be experiencing cognitive impairments as well.

On Monday’s episode of B&B, Dr. Escobar will tell Sally what’s wrong with her, and B&B spoilers indicate that the news will not be good at all. Sally will receive a devastating and life-changing diagnosis – a diagnosis that will be serious enough that Sally will consider refusing treatment entirely. That could mean that she receives a terminal diagnosis, and/or a diagnosis that has a treatment with terrible side effects.

The good news here is that Sally will have Katie Logan (Heather Tom) with her as she receives her diagnosis. She won’t have to go through this all by herself, even though it seems to be in Sally’s nature to want to handle things alone. But it seems that Katie will stress to her that the support of her friends and loved ones is very important right now, and Katie would certainly know about that. As B&B viewers know, Katie recently went through a terrible health crisis of her own.

The Bold and the Beautiful spoilers say that Sally will completely refuse to reach out to Wyatt Spencer (Darin Brooks) after she gets her diagnosis, even though Katie will encourage her to reach out to Wyatt and accept his help and support. Of course, B&B viewers know that she and Wyatt are in a difficult place right now, since Wyatt has broken off their engagement to go back to Flo Fulton (Katrina Bowden).

At any rate, Sally will have a lot to deal with on Monday’s episode. Whatever her diagnosis ends up being, she’ll want to handle it on her own. Katie will be there to support her in her time of sorrow, but ongoing B&B spoilers say that Katie will eventually tell both Bill Spencer (Don Diamont) and Wyatt about Sally’s diagnosis. But for the time being, Katie will keep Sally’s secret.

Meanwhile, on Monday’s new episode of B&B, Quinn Forrester (Rena Sofer) will get a reprieve from her ongoing battle with Brooke Forrester (Katherine Kelly Lang) as she sits down for a conversation with Flo. As B&B viewers know, Quinn has long wanted Flo and Wyatt to get back together. Sure, Quinn was a bit disturbed after it came out that Flo was involved in the Beth Spencer (River Davidson and Madeline Valdez) saga, but she quickly got over that.

Now, Quinn will want to talk with Flo about getting back together with Wyatt. She’ll express her happiness that Wyatt came to his senses and dumped Sally. Of course, Quinn has never liked Sally and has always thought that Flo was better for Wyatt.

The Bold and the Beautiful spoilers say that Quinn will push Flo to marry Wyatt quickly so that he won’t be tempted to go back to Sally. Of course, Flo would probably love to marry Wyatt, but she might not think that pushing for a quick wedding is the way to go. After all, Wyatt is technically still engaged to Sally, considering that Sally hasn’t really accepted the breakup yet.

But this is Quinn that we’re talking about, and she’ll push Flo to go for what she wants quickly, probably saying that there’s no reason to wait. There’s nothing more than Quinn would like to see than a 2020 wedding for Flo and Wyatt…and she might get her to wish.