The Young and The Restless Spoilers: Amanda’s New Bodyguard, Billy Helps Her Deal With Ripley 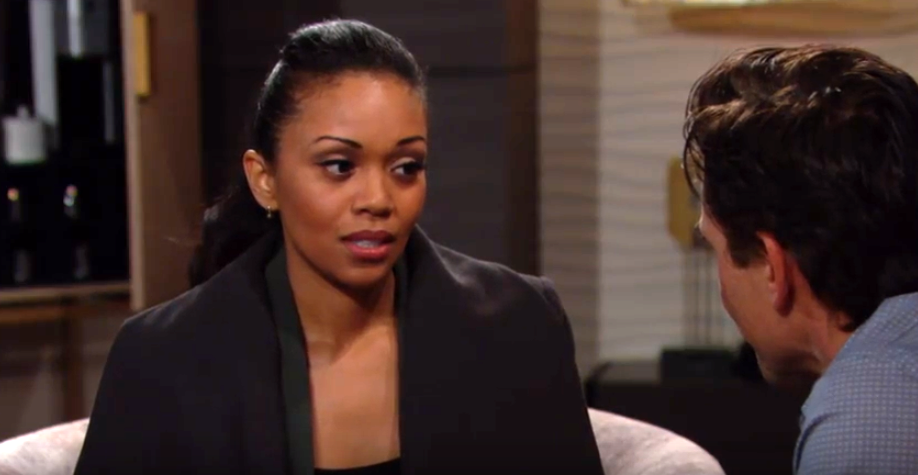 Viewers of The Young and The Restless will recall that Amanda came back to her hotel suite to find Ripley inside, waiting with a scarf of hers and he told her housekeeping to let him in because he told them she forgot her scarf! He tried to convince her he had changed and wanted her back as she threatened to call the police. Billy happened to come by and once Ripley saw him, he left.

He then stayed there and sat in a chair, guarding Amanda after calling the police and Rey Rosales (Jordi Vilasuso) showing up and making a report. Rey assured Amanda that the police would get him, meaning Ripley. Billy will continue to help Amanda deal with Ripley until the police catch him, which may take a while if Ripley is slippery enough! Amanda knows how to contact the staff, get a different room, enforce her restraining orders, etc, but Billy taking over and helping her with these measures is comforting. One thing she wouldn’t be likely able to do is to fight off an attacking Ripley if he should become violent, which controlling stalkers sometimes do, and a man protecting her is very attractive to her now!

Billy doesn’t really have anything else to do, but he recalls when Victoria Newman (Amelia Heinle) was abused by JT Hellstrom (Thad Luckinbill) during one of those times when they two were on again off again and he knows the terror that an abusive or controlling man can cause a woman.

Billy decides to set himself up as Amanda’s bodyguard, and helps her with getting a different suite in the Grand Phoenix and makes sure that Abby Newman (Melissa Ordway) and Chelsea Lawson (Melissa Claire Egan) know about the issue and to make sure that housekeeping and anyone else that Ripley could charm or con into knowing which suite Amanda is in will not give him the information, and also makes sure that the staff knows Ripley is being looked for by the police!

The Young and The Restless Spoilers: Victoria Needs To Be Saved From Billy, Victor Right To Frame Him #yr #YoungandRestless. https://t.co/LGX3erY459

The Young and the Restless Spoilers – “Bad Billy”

Abby is a bit perturbed by Billy’s over the top gestures, but then she too remembers when Victoria was being stalked and abused by JT. The difference is, Victor Newman (Eric Braeden)and Nick Newman (Joshua Morrow) were much more effective deterrents than Billy likely is, even if “Bad Billy” were to come out and give Ripley the scare of his life!

However, with Billy not staying in therapy and thinking his DID is all under control, something like this could indeed trigger “Bad Billy” to come out to play, and he doesn’t play games! However, if that happened, Ripley would probably be in for much more than a scare!