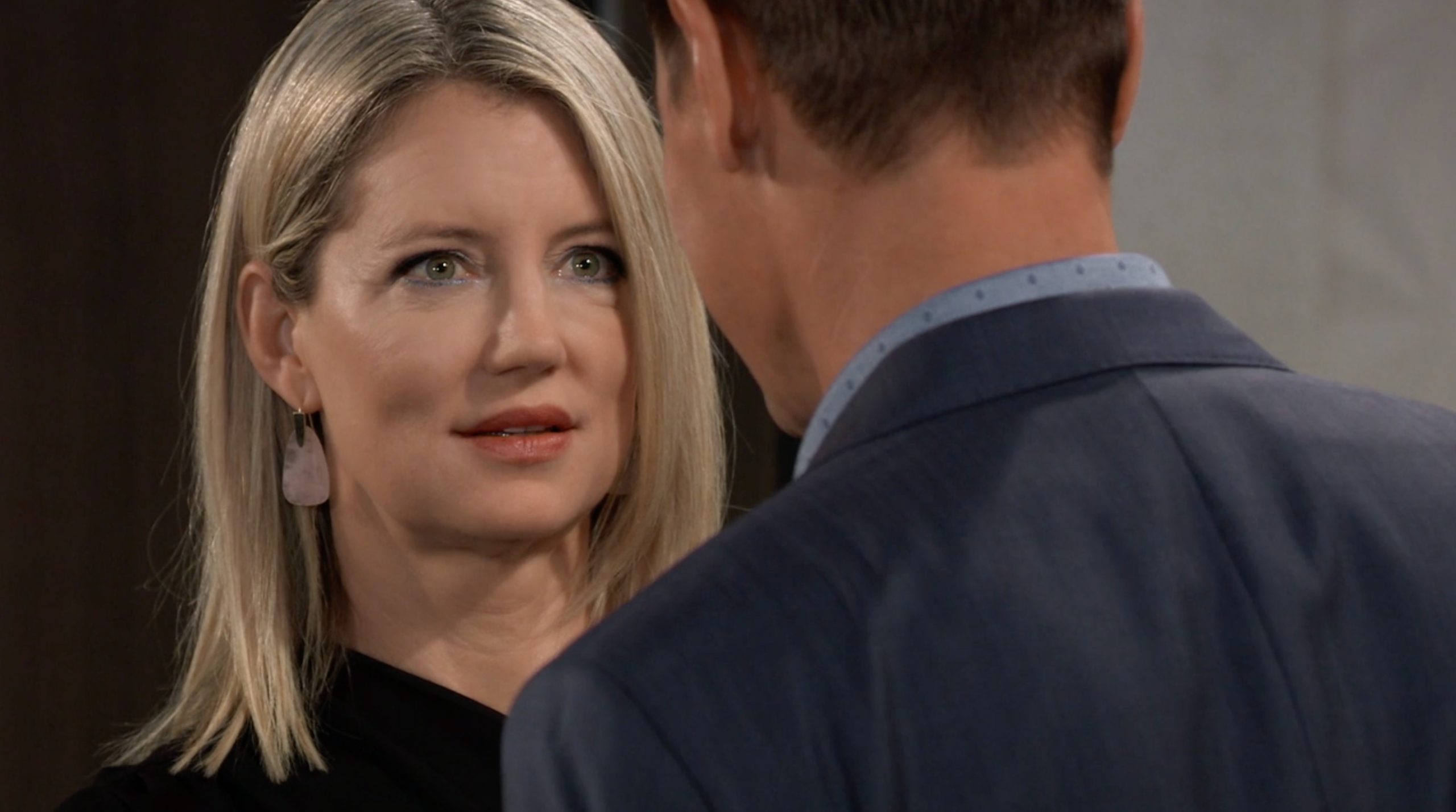 Jax chose to learn from his mistakes. Jax tells Nina this is her leap to take. Jax takes Nina back to his place and they end up in his bedroom. Nina and Jax begin to make love. This is the best leap Nina has ever taken. Jax and Nina begin to kiss again.

General Hospital’s Valentin Cassadine (James Patrick Stuart) visualizes Helena Cassadine (Constance Towers) and asks how she pulled this off. Helena tells Valentin how she hid her pregnancy because her husband was with his mistress.

Valentin says Helena must have enjoyed taking him from her husband. Valentin tells Helena she hid the codicil and hoped Nikolas Cassadine (Marcus Coloma) would find it. Valentin knows that Charlotte Cassadine (Scarlett Fernandez) came about. Helena wanted a mutual heir with Luke Spencer (Tony Geary).

General Hospital’s Sam McCall (Kelly Monaco) is dining with Alexis Davis (Nancy Lee Grahn). Neil Byrne (Joe Flanigan) is behind them and Sam says he’s not alone. Liesl Obrecht (Kathleen Gati) has joined Neil. Neil tries to get rid of Liesl but she wants to talk now. Alexis gets a call and starts to go outside. Neil speaks to Alexis before she gets outside the door.

Alexis tells Neil and Liesl to enjoy their dinner and leaves. Alexis sees Valentin rush past her and follows him. Alexis asks Valentin what he is going. Alexis tells Valentin he got all the smarts and none of the Cassadine crazy. Neil brings Alexis a jacket and asks how Valentin is. Alexis gives Neil his jacket bak and leaves after their talk.

General Hospital’s Sasha Gilmore (Sofia Mattsson) and Michael Corinthos (Chad Duell) are at Kelly’s. Michael asks if Lucy Coe (Lynn Herring) will be ok with Sasha’s ideas. Sasha asks Michael if he is having some kind of issues himself, he says no. Nelle Benson (Chloe Lanier) approaches and demands Michael make another offer on the stocks.

Nelle tells Michael he is about to lose Wiley Cooper Jones (Theo and Erik Olson) for good. Michael tells Nelle that is Brad and Lucas’ choice to move with Wiley. If Wiley is in Portland, he’s far away from Nelle. Michael will miss Wiley but thinks this is for the best. Nelle rushes to Valentin’s room and talks about the ELQ stocks.

General Hospital Spoilers: Harrison Chase And Willow Tait Have A Heart To Heart

Willow says Nelle is exactly like Shiloh. Willow and Chase talk about how they show the other how good they are every day. Willow wonders if Brad and Lucas are leaving with Wiley. Chase wonders how Willow would feel if it were true. Willow cherishes every minute she gets with Wiley. Willow says it’s hard not to see herself as Wiley’s mother. Willow’s feelings are not fair to their relationship. Willows phone rings, it’s Lucas. Lucas wants Willow to come to visit him in the morning.

General Hospital’s Brad visits Lucas who is ready to go home. Brad tells Lucas about the job offer in Portland. Brad tells Lucas they both have a job at the same hospital. Lucas agrees that this would be a great move to put distance between him and Julian.

Lucas says his family can visit whenever they want. Lucas wants to get back to their little family. Lucas believes they need that right now. Sam joins Brad and Lucas. Lucas wants a second opinion. Sam tells Lucas she thinks this is a great idea. Sam suggests they reconsider Wiley’s guardian since she can’t just jump on a plane and go across the country.