Bold and the Beautiful Spoilers: Douglas Makes Emotional Plea – How Will Hope Protect Him Without Risking Everything? 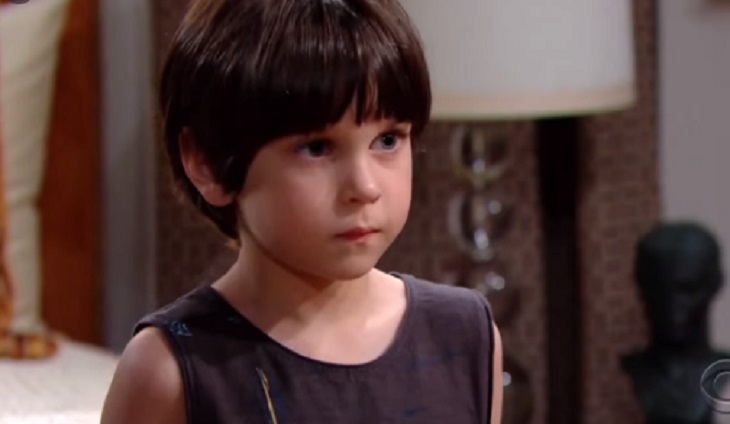 The Bold and the Beautiful spoilers reveal Douglas Forrester (Henry Joseph Samiri) makes an emotional plea to Hope Logan (Annika Logan). He also tells his adoptive mother about another big secret. How will she protect the little boy she loves without risking everything? It seems that this whole situation is close to exploding and when it does, where does that leave the innocent little boy?

B&B spoilers confirm Thomas is using and manipulating his son in another scheme. Just like last time, the person who will suffer the most is Douglas. He is an innocent little boy and despite warnings from others, Thomas doesn’t care. His only concern is that his plan succeeds so he can have Hope and give his son a “real family.”

It is teased Douglas will end up making an emotional plea to Hope. This is part of Thomas’s plan and he thinks that it will lead Hope to make them a family. However, Douglas also tells Hope about a secret. What could this be about and is it part of Thomas’s scheme or will the child tell Hope that he is being used again?

The Bold and the Beautiful Spoilers: Is Brooke’s Hatred For Thomas Greater Than Her Love For Ridge – ‘Bridge’ Future Revealed!https://t.co/9IBTWK2oW3

The Bold and the Beautiful spoilers suggest Hope won’t react the way Thomas thinks she will. Instead, she could decide that enough is enough. Determined to protect Douglas from any further abuse or emotional damage, she could be the one turning the tables this time.

The Bold and the Beautiful Spoilers: Losing Another Parent?

Last week, Atkinson told Soap Opera Digest that Douglas fears he is losing a parent all over again. As seen in episodes that aired this week, fans assume that is Hope. However, what if Hope decides to get sole custody of Douglas based on Thomas’s newest scheme? Could the parent that he loses actually be his father? It seems that Thomas will just continue to hurt his son unless that power is taken away from him. Fans will have to keep watching the CBS soap to see what the writers have planned.