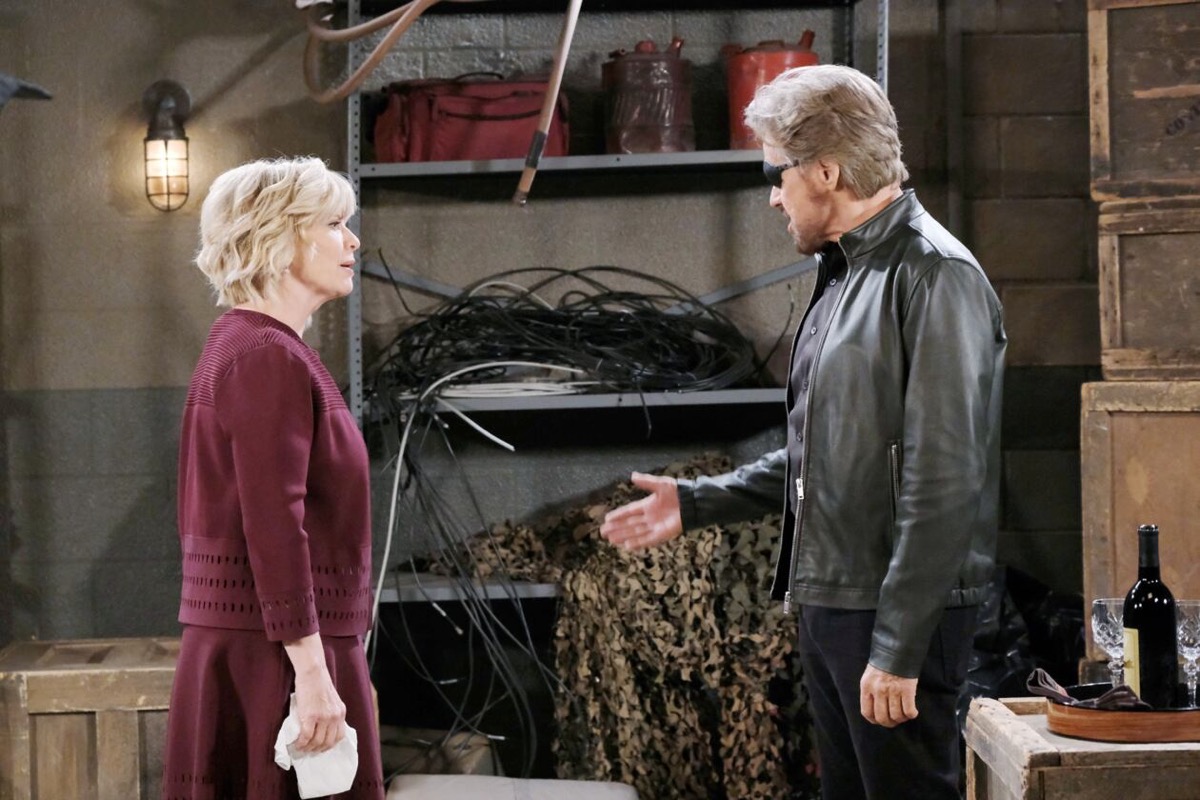 Lani Price (Sal Stowers) will get payback, when she exposes Gabi Hernandez DiMera’s (Camila Banus) sins and stops her wedding! Lani makes quite the statement as she first shows up in her nun’s habit then takes it off to reveal what appears to be a black lace slip!

Gabi is forced to admit publicly that she blackmailed Lani into dumping Eli Grant (Lamon Archey) at the altar of what would have been their wedding, and breaking his heart, using an app on her phone that can control pacemakers and heart rates!

Gabi, murderously livid, grabs her phone and presses the app, and Julie Williams (Susan Seaforth Hayes) gasps, then cries out, as she collapses flanked by Chad and Abigail DiMera (Billy Flynn, Kate Mansi) and Eli rushes to help! JJ Deveraux, (Casey Moss) attests to the truth of Lani’s statements, and to Gabi’s shock and amazement as well as the other guests – including big brother Detective Rafe Hernandez (Galen Gering) Julie gets up and admits that this time she was faking a heart attack as JJ explains he intercepted the Visionary Bionics pacemaker that goes with the app on Gabi’s phone before it could be implanted with her! Rafe has to arrest his sister and by the end of the week, Gabi feels her future is bleak! Meanwhile, Lani tries to explain her actions to Eli.

Jennifer Deveraux (Melissa Reeves) gets the devastating news that her father, Bill Horton (Edward Mallory) has died in Africa. Doug Williams (Bill Hayes) reflects on his first coming to Salem as Brent Douglas, after following his friend Bill Horton to Salem; JJ will stay in Africa after Bill’s funeral, and Abby shocks Chad when she doesn’t want him to go with her to the funeral! The family will continue to support each other through their loss.

“Steve Johnson” aka Stefano DiMera (Stephen Nichols) continues to hold Kayla Brady (Mary Beth Evans) in the storage room where she has been taking care of his gunshot wound. He will reveal himself as Stefano to her, and she will be shocked but finally believe him. She will also try the same thing that Shawn Brady (Brandon Beemer) tried with his mother, Hope Brady aka Princess Gina Von Amberg (Kristian Alfonso) by talking to Steve in Stefano’s unconscious, telling Steve she knows he’s in there somewhere! Meanwhile, Rafe and Justin Kiriakis (Wally Kurth) will try to track down Kayla, who is now known to be missing!

Days Of Our Lives Spoilers: Sonny and Will Leave Town After Victor’s Part In Will’s Conviction Revealed #Days #daysofourlives https://t.co/p0PXYTIlsX

Ben Weston (Robert Scott Wilson) and Ciara Brady (Victoria Konefal) learn to deal with fugitive life after Chad and Abby turn them into Rafe, and he shows up at their door to arrest them! Before he shows up, however, Ciara tells Ben her theory about who might have killed his sister, Jordan Ridgeway (Chrishell Stause) and when Rafe starts reading them their rights, Ciara resorts to desperate measures to keep him from arresting Ben and comes up behind him with a baseball bat, knocking him out cold!

5) An Unexpected Donor Match Is Found For Baby Mickey Horton

Sarah Horton (Linsey Godfrey) receives some hopeful news about Mackenzie “Mickey” Horton (Josephine and Rosalind May) regarding a bone marrow donor match, which is the baby’s only hope for survival since the chemotherapy didn’t work on her. However, Sarah will be shocked when she finds out who the donor match is!

That’s all for this week’s Five Key Takeaways from Days of Our Lives. Keep watching the show, and check Days of Our Lives spoilers frequently for all the latest news, updates and developments!