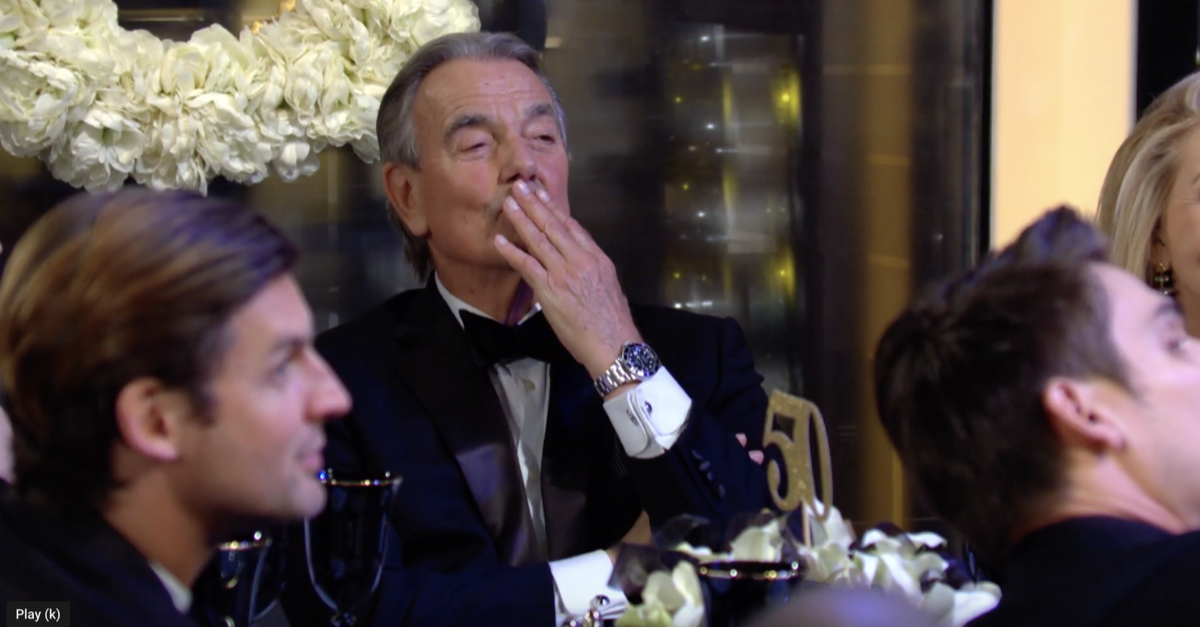 Festivities begin in Tuesday’s episode, which also celebrates Eric Braeden’s 40th anniversary on the show. Nikki has been working for weeks to plan this huge gala, which celebrates both Newman Enterprises’ 50th anniversary and Victor himself. Victor will be more than pleasantly surprised and filled with anticipation since he has no idea what his wife has cooked up! Victor and Nikki are in a very good place themselves, with their bond never being stronger, and they trust each other unconditionally. For her part, Nikki is extremely proud of her husband’s accomplishments and is excited about the opportunity to honor him in such a public manner.

The Young and the Restless Spoilers: Is Green Day’s Billie Joe Armstrong Heading To Y&R?

Victor Newman Will See People He Hasn’t Seen For Years

Victor has no idea who Nikki has invited, and he will see people he hasn’t seen for years; including Noah Newman (Robert Adamson), Victor’s first wife, Julia Martin (Meg Bennett) and his brother Matt Miller (Robert Parucha), and many old friends and even some foes will show up at the festively decorated venue. Victor and Nikki have been together for over thirty years now, although it has not been consecutive. They have been divorced and remarried a few times.

Victor Newman hasn’t always been Victor Newman, as longtime viewers of The Young and The Restless will recall. Victor Newman was born Christian Miller on March 7, 1947, in Buffalo, New York. He was put in an orphanage by his mother, Cora Miller (Dorothy McGuire) when he was seven years old. His father was Albert Miller. He has, as previously mentioned, a brother named Matt.

The Young and the Restless Spoilers: Sharon’s Chemotherapy Begins – Mariah Remains By Her Side https://t.co/5G3xyBjQ1u pic.twitter.com/DXTBQFvbaN

By the time he was a teenager, he left the orphanage and started to work his way through to becoming one of the world’s wealthiest tycoons. He changed his name to “Victor Christian Newman,” Victor standing for “victorious” and Newman standing for “new man,” as he was a completely new man. In 1970, Victor married Julia Martin as he began to develop a strong business reputation.

In 1980, Victor and his wife Julia move to Genoa City to help Katherine Chancellor (Jeanne Cooper) run her company, Chancellor Industries. Julia felt neglected by Victor and sleeps with her photographer, a man named Michael Scott (Nick Benedict). Victor then created his own company, Newman Enterprises, and ended up cheating on Julia as well, with Eve Howard (Margaret Mason) and later Lorie Brooks (Jaime Lyn Bauer).

Julia and Victor divorce and she leaves town with Michael, just as Victor begins a romance with then stripper Nikki Reed. Having been from the lower walks of life, Victor teaches Nikki about society. Victor later left Genoa City and traveled to Kansas, letting Nikki and the rest of the Newman family believe he had died. He meets Hope Adams (Signy Coleman). This was Adam Newman’s (Mark Grossman) mother. They returned to Genoa City and married. At one point, he had an affair with Ashley Abbott (Eileen Davidson) which produced Abby Newman (Melissa Ordway). Nick Newman (Joshua Morrow) and Victoria Newman (Amelia Heinle) are Victor and Nikki’s children together.