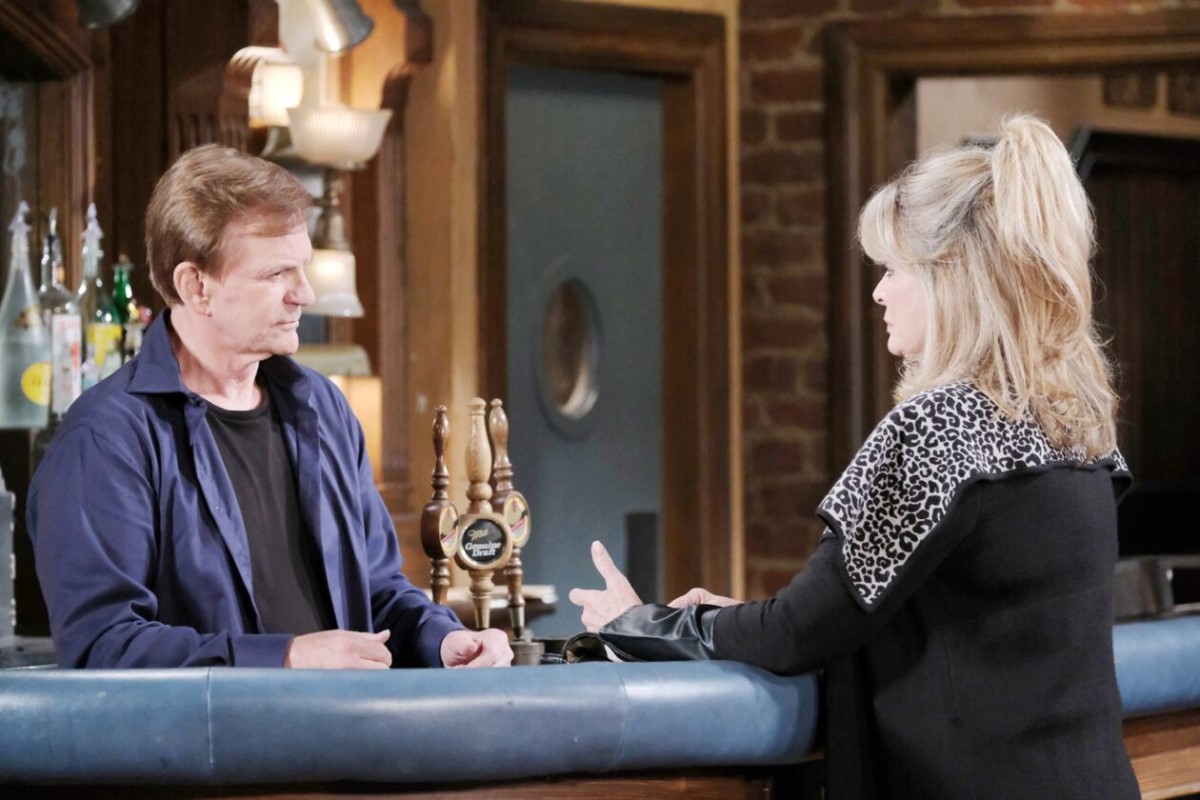 Days of Our Lives spoilers tease that Hattie Adams (Deidre Hall) and Roman Brady (Josh Taylor) will share a sweet Valentine’s Day moment in an upcoming episode of Days Of Our Lives!

In a photo still, on NBC’s website, one of the photos shown for this week’s shows has Hattie standing or sitting at the bar in Brady’s Pub and talking to Roman, who is behind the bar. They may be talking about memories of when they first met when she was a waitress in a diner and he struck up a conversation with Hattie because of her striking resemblance to Dr. Marlena Evans (Deidre Hall).

She was a friend of Fay Walker (Valerie Wildman), who was Nicole Walker’s (Arianne Zucker) mother, giving her another tie to the Salemites. She was also a fan of a locally televised program hosted by a psychiatrist, Dr. Higley, who had left the show and been replaced by Marlena and she was a little upset about it first because she liked Dr. Higley!

Even back twenty years ago Stefano DiMera (then Joe Mascolo) was obsessed with Marlena Evans, and also noticed Hattie’s resemblance to her. He sent Dr. Wilhelm Rolf (William Utay) and Bart Biederbecke (Steve Blackwood), another associate of his, to talk to Hattie.

Stefano wanted to make Hattie into a double of Marlena. Bart played to Hattie’s ego and told her she could host the television program better than Marlena could, but she would need plastic surgery to look exactly like her – he had recommended a Dr. Steiner, who was really Rolf. Fay tried to talk her out of the plastic surgery, but she had it but got fired from the diner first and she was so devastated she tried to commit suicide by jumping off a bridge but luckily, Roman saw it and saved her.

Days of Our Lives Spoilers: Sonny And Will Separately Recall Their Last Valentine’s Day Together https://t.co/63IJOIxoVH pic.twitter.com/3Zm6zGySim

Days of Our Lives Spoilers – Hatti Adams As Marlena Evans

She then went through with the plastic surgery and Rolf tutored Hattie in how to be a lady and how to pass as Marlena so she could fool even Roman when Marlena was gone; back then, Roman was the chief of police in Salem! But Hattie was always enamored of Roman from that point on, even though she was married –fraudulently – to John Black (Drake Hogestyn) in 2018, after Hattie, on Stefano’s orders, kidnapped Marlena and put her in Bayview Sanitarium under Hattie’s name and when John got suspicious and came looking, both John and Marlena were put in straitjackets and nearly got ECT until Roman and other police busted in and saved them.

This is how Hattie wound up in prison with Eve Donovan (Kassie DePaiva)! Roman, however, remained friendly enough with Hattie, knowing she had been under the control of Stefano, and they are still good friends to this day, and maybe after all this time, a little spark comes up in Roman? Time will tell!