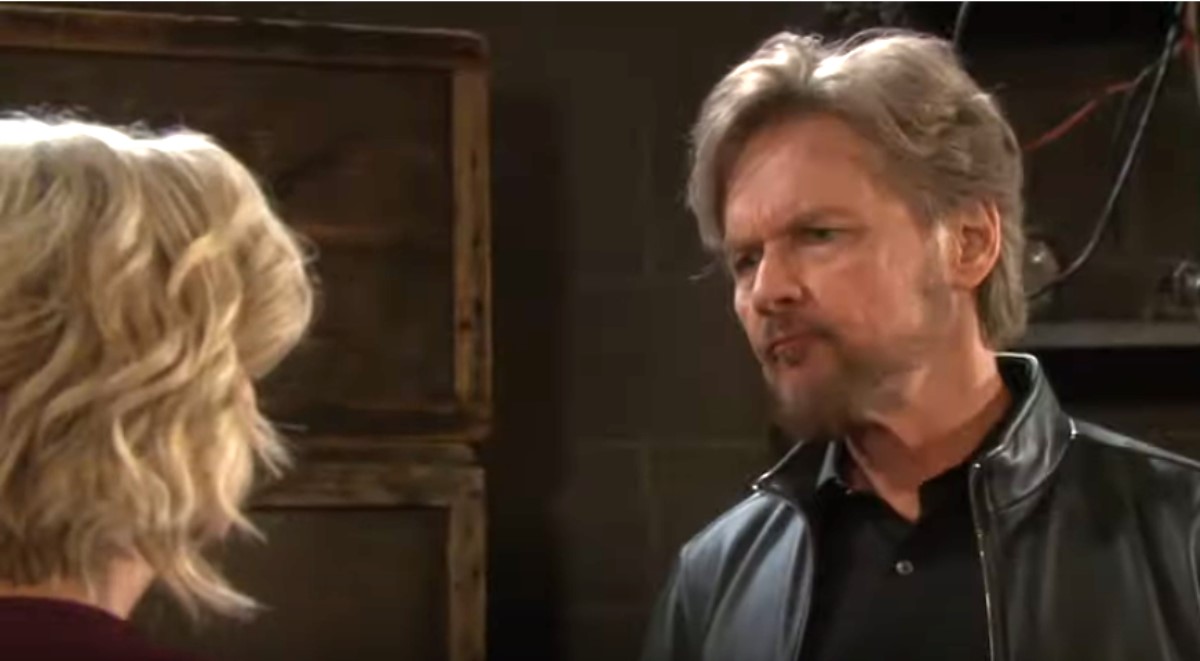 Days of Our Lives spoilers reveal Stefano DiMera (Stephen Nichols) will make a shocking confession to Dr. Kayla Brady (Mary Beth Evans). Afterward, he holds her hostage so she can’t warn Salem of the truth. Is the villain being honest when claiming that the real Steve “Patch” Johnson is gone forever? Also, Evans explains why Kayla lied to Justin Kiriakis (Wally Kurth) and if her new romance can survive.

DOOL spoilers indicate while Kayla is helping “Steve,” he tells her that he is really Stefano DiMera. She thinks it’s ridiculous and doesn’t believe him. However, Evans explained to Soap Opera Digest that she finally realizes it’s true when Stefano goes into detail about certain incidents.

“… Steve was on his way back to her when his goons abducted him and put Stefano’s essence into Steve… She starts to accept that maybe it’s [true] because he’s been such a jerk to her.”

Stefano also takes off the eye patch and shows off how he has two eyes, thanks to Dr. Rolf (William Utay).

It is indicated that while “Steve” didn’t have to force Kayla to help him, now she knows the truth. He can’t risk others finding out that he is really Stefano. At least, not right now. So, he ties her up and holds her hostage.

Days of Our Lives spoilers reveal Kayla gets the idea that her many years of loving Steve will be the key to fixing this situation. She even tries looking deep into the man’s eyes, but nothing happens. This is when Stefano tells her that “Patch” is gone forever, which is what Princess Gina (Kristian Alfonso) said about Hope Brady. However, it seems unlikely. There is a way, but Stefano and Gina don’t want anyone knowing that. It’s much easier for the villains to continue their reign of terror if the Salemites just give up.

Days of Our Lives Spoilers: Sarah Horton Running Out Of Time – Who Will Step Up To Save Baby Mickey? #days #dool #daysofourlives https://t.co/6z55QNAg5G

In a separate interview, Evans explained why she lied to Justin in order to protect “Steve.” The actress told Soap Opera Digest,

“Her relationship with Justin is just so solid and grown-up. It kills her to lie to him, She does not want to lie to him but she does it because she’s going to do this for Steve.”

As for what happens next, fans can expect Justin to become worried about Kayla. He and Rafe Hernandez (Galen Gering) try to track down the missing doctor. She was supposed to operate on Julie Williams (Susan Seaforth Hayes) and put in the new pacemaker. However, she didn’t show up and nobody can reach her, which is setting off alarm bells.

Will they be able to find her in time or can she somehow escape? Keep watching the NBC soap opera to find out.