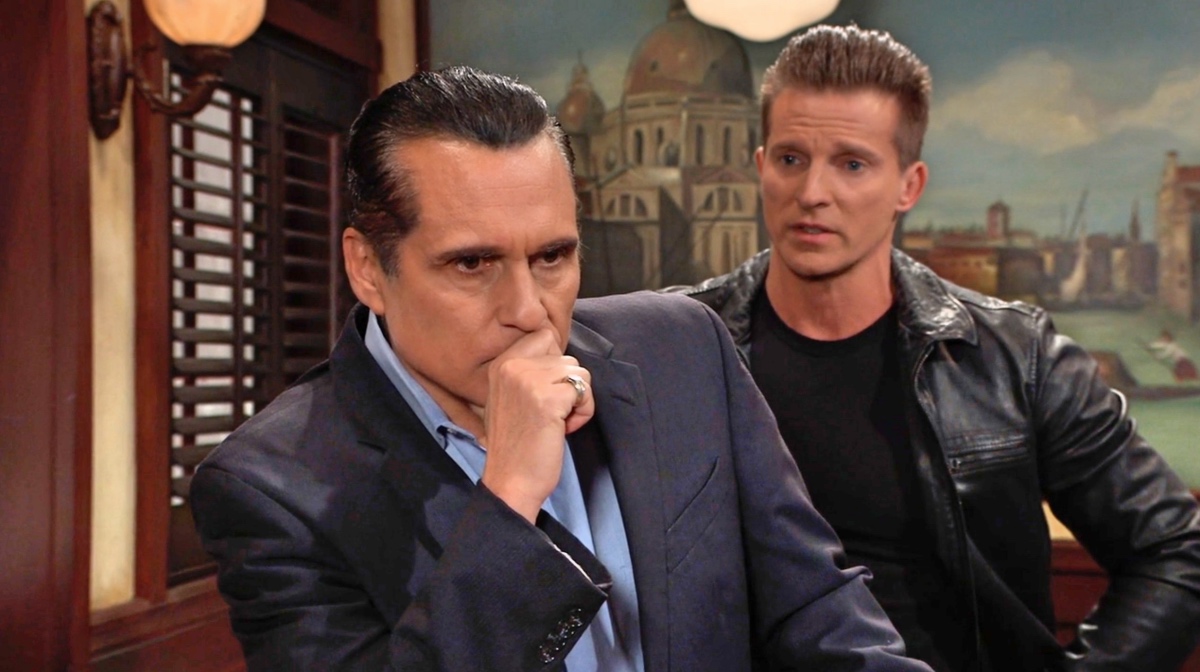 General Hospital (GH) spoilers for Thursday, February 20, tease that Brad Cooper (Parry Shen) will face a difficult choice. It might take some of the pressure off if he admitted Julian Jerome (William deVry) knew the truth. At least someone else would be going down with Brad! Nevertheless, Brad will choose to keep that info to himself.

When Lucas Jones (Ryan Carnes) asks who else knew “Wiley Cooper-Jones” (Erik and Theo Olson) was Michael Corinthos’ (Chad Duell) son, Brad will keep quiet about Julian. He won’t admit he told Julian about the swap, so Julian’s hands will be kept clean for now.

Over with Nelle Benson Archer (Chloe Lanier), she’ll tell “Wiley” that he’s going on a little trip with Mommy. Now that Willow Tait’s (Katelyn MacMullen) out cold on the floor, Nelle will hope she can make a break for it with her son. General Hospital spoilers say Nelle won’t get very far though, so stay tuned to watch this kidnapping attempt get thwarted.

Meanwhile, Jason Morgan (Steve Burton) will offer updates on the explosion and the destruction that was caused. He’ll insist that Cyrus Renault (Jeff Kober) got hurt tonight, but Sonny will contend that it’s not enough. GH spoilers say Sonny won’t rest until this new enemy has been truly snuffed out.

Speaking of enemies, Cyrus will face another on when Jordan Ashford (Briana Nicole Henry) comes to visit him. He’ll admit he was wondering when he was going to see Jordan again. General Hospital spoilers say these two should have a tense conversation. Jordan will undoubtedly want all the deadly drama to stop, but Cyrus may have no interest in backing off.

Of course, Marcus Taggert (Real Andrews) will remain on Curtis Ashford’s (Donnell Turner) radar. GH fans know Trina Robinson (Sydney Mikayla) just greeted Taggert as her dad, so this guy’s a mystery for Curtis to unpack. He’ll manage to rile Taggert up with all his questions in Thursday’s episode. Taggert will make it clear that his life is none of Curtis’ business.

Trina and Cameron Webber (William Lipton) will seem taken aback as Taggert spars with Curtis. They’ll just have to stand there and watch the conflict explode! Back with Jason, it looks like he’ll get a call from Sam McCall (Kelly Monaco). She’ll insist there’s something Jason and Sonny need to know, so this is undoubtedly about the baby swap revelation.

It won’t be long until Sonny’s lashing out along with the others, so stay tuned for all the chaos ahead. We’ll keep you posted as more GH news emerges. Stick with the ABC soap and don’t forget to check back often for the latest General Hospital spoilers, updates and news.