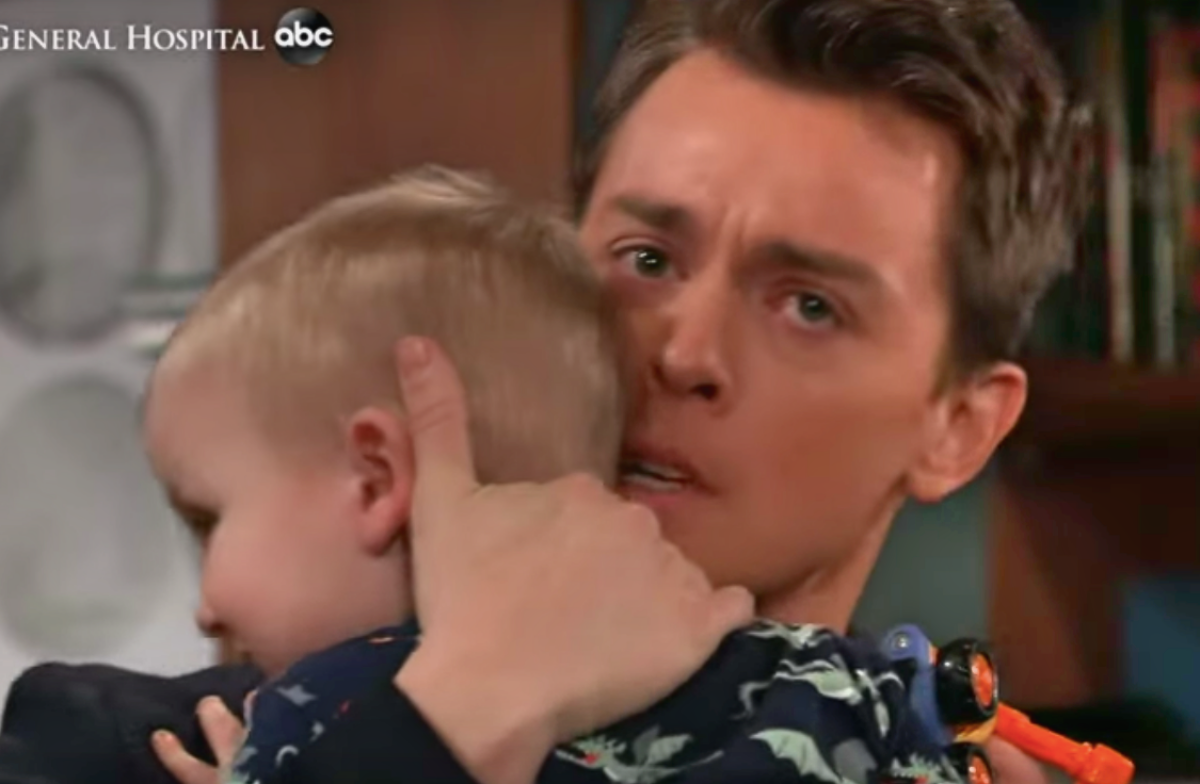 Sonny says this isn’t enough. Sonny doesn’t think controlling the harbors is all Cyrus is after. Jason tells Sonny there is more to this. Sonny suggests Cyrus is in this for more than money. Jason says maybe that is why Cyrus is there. Jason wants to know why Cyrus wouldn’t cut his losses. Sonny thinks Cyrus is there for revenge. Sam McCall (Kelly Monaco) calls Jason saying he and Sonny need to know something.

General Hospital’s Cameron Webber (William Lipton) is shocked when Trina Robinson’s (Sydney McKayla) dad turns out to be Marcus Taggert (Real Andrews). Cameron says he didn’t know Trina’s dad was in town. Taggert wants to get to know Cameron. Trina says Taggert has made it his life’s work to embarrass her. Taggert asks if Cameron is related to Liz Baldwin (Rebecca Herbst) and Cameron confirms she’s his mother.

Curtis Ashford (Donnell Turner) watches from outside wondering if this is why Trina is so good at giving him the run-around. Taggert brings up the Port Charles mobsters of the past. Taggert asks if Trina’s mom knows about this. Taggert needs Trina’s mom to get in touch with him. Taggert notices Curtis outside the window. Taggert asks if Curtis is following him. Curtis came to get a burger.

Curtis has seen enough of Taggert for one day. Curtis tells Taggert he didn’t know he had a daughter. Jordan interrupts their argument. Taggert says Curtis was tailing him. Jordan knows Taggert is on edge and wants to handle this. Jordan wants Curtis to go to her office and talk. Trina asks if everything is ok. Taggert tells her to go back inside. Trina wants to know what this is about, Taggert refuses to share. Taggert needs to leave and tells Cameron to get Trina home safely tonight. Taggert insists Trina’s mom call him and leaves.

Carly calls the police and asks for a squad car to be sent. Brad begs someone to try and reach Willow to warn her. Lucas demands to know if anyone else knew. Julian Jerome (William DeVry) stares at Brad before he speaks. Brad lies and says only he and Nelle were involved. Brad wants to be the strong one for Lucas. Brad says he promised Lucas a baby. Brad couldn’t say no to a second chance to be a father. Bobbie Spencer (Jackie Zeman) tells Brad he didn’t think about anyone but himself.

Brad says Nelle convinced him that the baby was safer with him. Lucas says Brad could have made this right. Lucas can’t even look at Brad. Brad is arrested as Jason arrives. Sam leaves to keep from being caught with Jason. Carly gives Jason an update on what happened. Jason has to take care of something and asks Carly to let Michael know she loves him. Julian says Brad says he was trying to protect Lucas. Lucas can’t believe that Brad did this. Sonny and Michael arrive with Wiley.

General Hospital’s Willow Tait (Katelyn MacMullen) has been knocked out and Nelle Benson (Chloe Lanier) prepares to leave with Wiley Cooper Jones (Theo and Erik Olson). Nelle gets the diaper bag together. Nelle shows Wiley their passports and plans to get his coat. Michael and Chase arrive as Nelle starts out the door. Nelle says Brad didn’t tell him everything. Michael asks what Brad hasn’t told him. Nelle says she wouldn’t give the baby to Brad. Nelle says Brad stole the baby.

Nelle claims to have been trying to get back to Michael after she had the baby. Nelle claims to have been going in and out of consciousness. Nelle claims Brad switched the babies. Nelle tries to spin a story saying she thought Willow could be a part of Brad’s lies too. Nelle claims to be a victim of Brad’s lies too. Nelle says she’s not letting anyone take that baby. Michael tells Nelle he’s not letting her hurt the baby. No one is going to believe Nelle’s story. Chase comes from behind and grabs Nelle. Michael gets his son in his arms. Sonny arrives as Nelle is arrested. Willow wakes up at GH and asks Chase what happened. Willow asks if Wiley is ok.

General Hospital Spoilers: Carly Struggles To Figure Out What Is Best For Wiley https://t.co/2khOzd1Taj pic.twitter.com/W61SUlikxP

General Hospital’s Jordan Ashford (Briana Nicole Henry) shows up to visit Cyrus Renault (Jeff Kober). Jordan used to work with Cyrus. Cyrus brings up T.J. Ashford (Tajh Bellows). Cyrus questions Jordan about her time working with him. Jordan wants to know how her identity was leaked to him. Cyrus can’t believe he had four traitors. Cyrus asks about her partners, she says two are dead. Jordan tells Cyrus his drugs killed her partners. Cyrus laughs in her face. Jordan accuses Cyrus of starting a mob war to get back at her.

Jordan demands to know what Curtis was doing. Jordan thinks Curtis should trust her. Jordan claims she can’t tell him work-related information. Curtis knows when Jordan is in over her head. Curtis asks if Jordan is Trina’s mother. Jordan says no, Trina is not hers. Curtis tells Jordan he needs to know the truth. Taggert arrives and agrees with Curtis. Jordan tells Taggert to come in and insists all her calls be held. Taggert tells Jordan Curtis needs to protect himself.