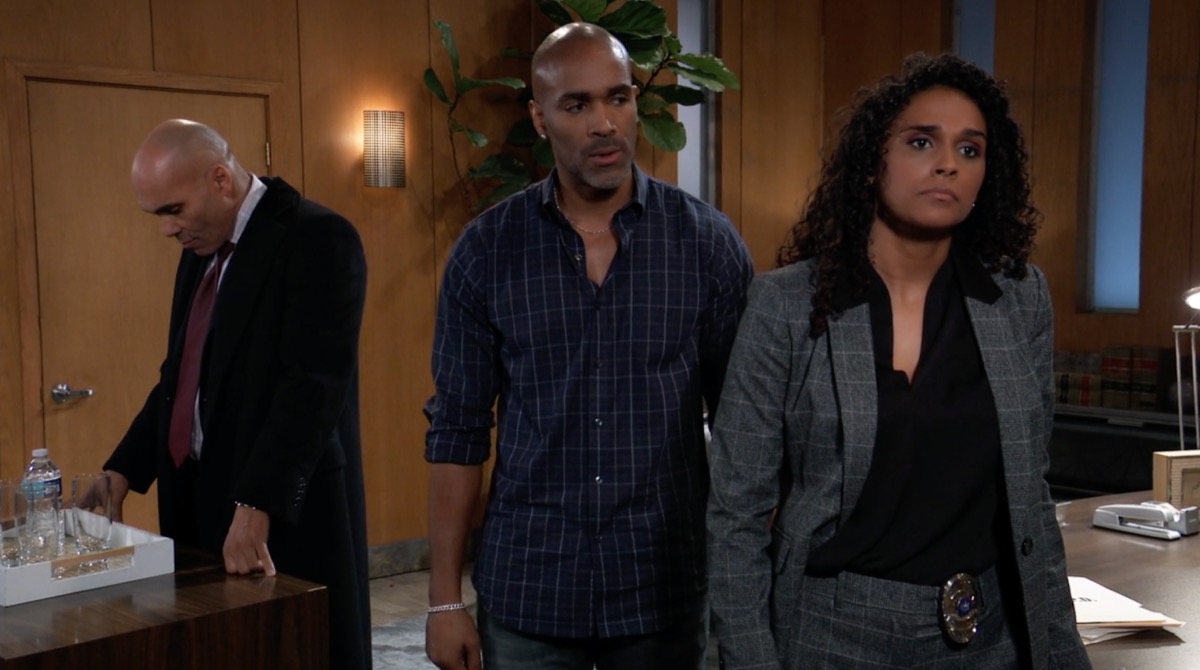 Sonny tells Julian Jerome (William DeVry) to leave. Michael tells Lucas Jones (Ryan Carnes) that they need to make this ok for Wiley. Carly Corinthos (Laura Wright) suggests giving Wiley a snack. Michael asks Lucas to do that. Lucas apologizes to Michael about everything. Carly and Michael try to reassure Lucas that no one blames him. Bobbie Spencer (Jackie Zeman) walks Lucas to the kitchen. Michael suggests Carly go to be with Lucas. Michael thanks Sasha Gilmore (Sofia Mattsson) for calling Harrison Chase (Josh Swickard).

Curtis demands the full story. Jordan says they had been embedded long enough to manufacture evidence. Jordan and the group framed Cyrus for crimes he had already committed. Curtis wants to know how Jordan could keep this from him. Curtis says they have to be all in, this won’t work otherwise. Jordan says Cyrus is evil and in their back yard. Jordan insists Curtis watch out for himself and T.J. Ashford (Tajh Bellows). Jordan isn’t going to let anyone burn down Port Charles.

GH Spoilers: Nelle Benson Pretends To Have A Break

General Hospital’s Nelle Benson (Chloe Lanier) arrives at the PCPD and is about to be locked up. Brad Cooper (Parry Shen) calls to Nelle who tells him he is despicable. Nelle accuses Brad of stealing the baby that night. Brad and Nelle argue back and forth as the guard listens.

Chase tells Willow that Nelle took her baby to the hospital. Willow talks about Michael speaking in their grief group. Willow tells Chase that a nurse came and Michael had to give the baby up. Willow thought she understood how Michael felt. Willow says it’s her turn to grieve her child. Willow is furious that Brad could have told the truth at any time. Chase says Nelle has been blackmailing Brad all alone. Willow trusted her son to Brad and he tried him in like a used appliance. Willow sobs over her child.

General Hospital’s Julian calls Ava Jerome (Maura West) to Charlie’s to talk. Julian explains everything to Ava. Julian tells Ava how Nelle gave Brad her baby and switched the baby with the dead one. Ava asks where Brad is now. Ava begs Julian to tell her he had no part of this. Julian knows if Sonny finds out he’s a dead man. Julian tells Ava he has knows it was a different baby since it was a couple of days old. Ava wants to know why Julian didn’t go to Sonny when he found out the truth.

General Hospital Spoilers: Wiley’s real identity revealed: how will this affect the lives of those involved? https://t.co/Uc0xl8ANxb pic.twitter.com/EaNDgbAUmV

Julian wasn’t going to take Wiley away from his son. Julian would give anything not to see the look on Lucas’ face he saw when Brad confessed. Ava tells Julian that Brad is eventually going to tell that he was involved. Ava wants Julian to get out of the country. Julian says Ava knows what it feels like to feel you failed your kids. Julian had a plan to shut Brad up. Julian says if Lucas hadn’t gotten in the car. Ava thinks they need to act before Brad talks.

General Hospital’s Lucas talks about how much Brad loves him and Wiley. No one expects Lucas to stop loving Wiley. Lucas wonders what happens now. Carly and Bobbie tell Lucas he can’t let what Brad did separate him from his family. Carly says Bobbie and she will be his rock. Lucas tells them that Brad usually packs Wiley’s favorite book. Lucas talks about freezing a teether for Wiley.

Lucas asks if Carly remembers when he asked her what the hardest part of parenting was. Carly saying learning what’s the right thing to do. Lucas being Wiley back to the living room. Lucas hands Wiley over to Michael. Lucas hands the diaper bag to Michael and kisses Wiley goodbye. Michael kisses his son, Lucas tells him to take good care of Wiley.