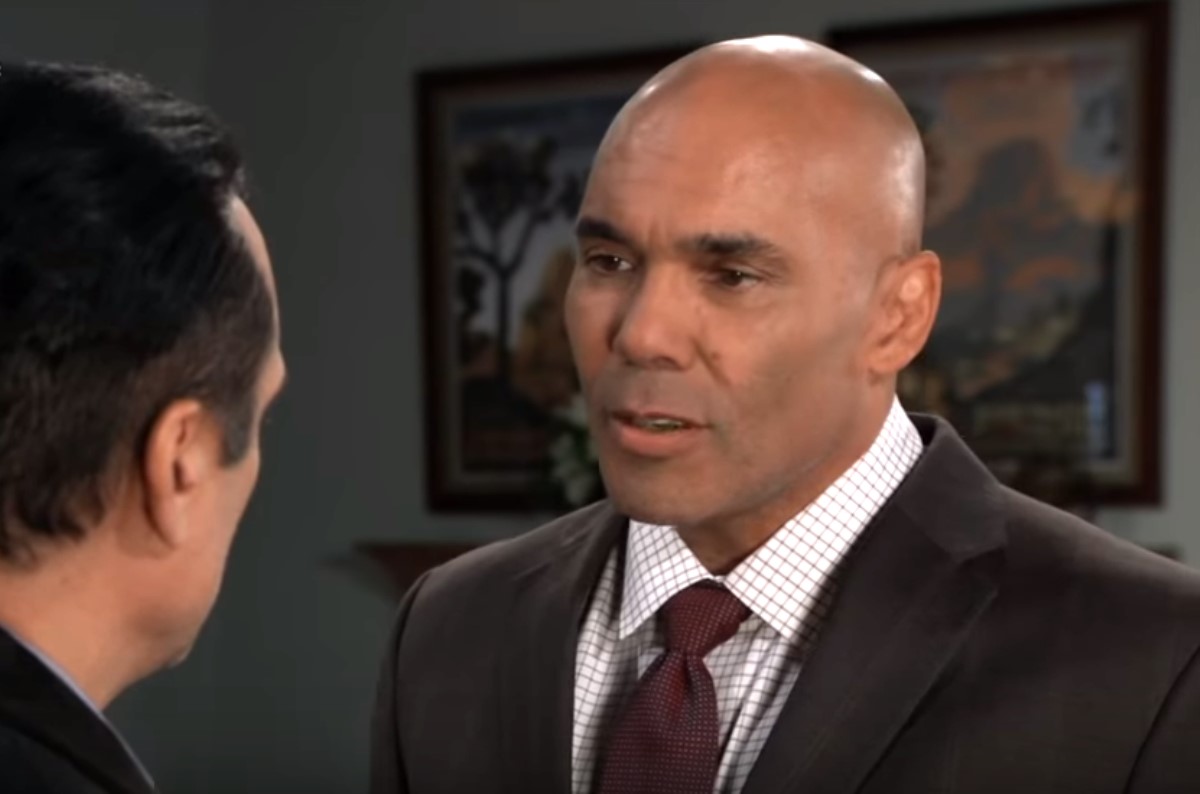 General Hospital spoilers tease that Lieutenant Marcus Taggert (Real Andrews) may be forced to work with his enemy, Sonny Corinthos (Maurice Benard) to take down a mutual enemy in an upcoming episode of GH!

Longtime General Hospital viewers will recall that Taggert has had a vendetta against Sonny for literally years – Sonny’s abusive stepfather, Officer Deke Woods (uncredited actor shown only in flashbacks). To outsiders, he appeared to be a nice guy and was a well-respected police officer – but behind closed doors, he continuously beat and verbally and emotionally abused both Sonny’s mother and Sonny. He often locked Sonny in a closet, causing him to become claustrophobic. Then Deke met Marcus Taggert when he was a child.

Marcus was a troubled kid and Deke was someone he could look up to. Deke was good to Marcus, mentored him, and made him want to become a cop just like him. Marcus did grow up to become a cop and became Deke’s partner as a rookie. Then, one day Deke beat Sonny’s mother so badly that he put her in a hospital, but being an unscrupulous coward, he pinned the blame on Sonny and told Marcus to go after him. So Sonny told Joe Scully (Robert Miano) the local mobster who took him in after he left home what happened, and Joe told him to be out in the public the next night.

Deke was in an alley in Bensonhurst investigating an anonymous tip from an informant about a string of burglaries. Scully put a gun to his head and took Deke’s gun from the holster. Deke identified himself as a cop. Scully pressed the gun to the back of Deke’s skull. Scully finally spoke, “I know who you are, and I know what you are.” Joe then attached the silencer to his own gun and as he stepped closer to Deke he told him, “You’re a pig, and I don’t just mean a cop. You’re a coward passing for a man.” Scully shot Deke in the forehead and then fired one more shot into Deke’s chest to make sure he was dead.

The next day, Deke’s body was found in an alley, shot in the head and the heart. Marcus blamed Sonny for killing his mentor and partner and vowed to get revenge, and once Marcus got a job as a Port Charles cop, he dogged Sonny’s every step, determined to take him down for good!

Right now, Sonny and Jason Morgan (Steve Burton) have more current intel on what is going on with Cyrus Renault (Jeff Kober) and his invasion of Sonny’s territory with his drug cartel than the Port Charles Police do, and that includes Commissioner Jordan Ashford (Briana Nicole Henry) who was one of four DEA agents under deep cover along with Marcus, who had infiltrated Renault’s organization and busted him, although Renault maintains that he was framed!

Taggert and Jordan are both in danger, with Renault having targets on their backs; their two former partners, Bob Massicotte (Randy J. Goodwin) and Mark Simon (uncredited character) are already dead, and with impunity and indignity their murders were staged to look as if they had overdosed on drugs!

But Sonny and his organization may be the only ones who can successfully take down Renaults organization, and Marcus and Sonny may be forced to work together to take it down for good and make Port Charles a safe place to live again! Renault has pushed Sonny with his back to the wall, and Sonny is pushing back!