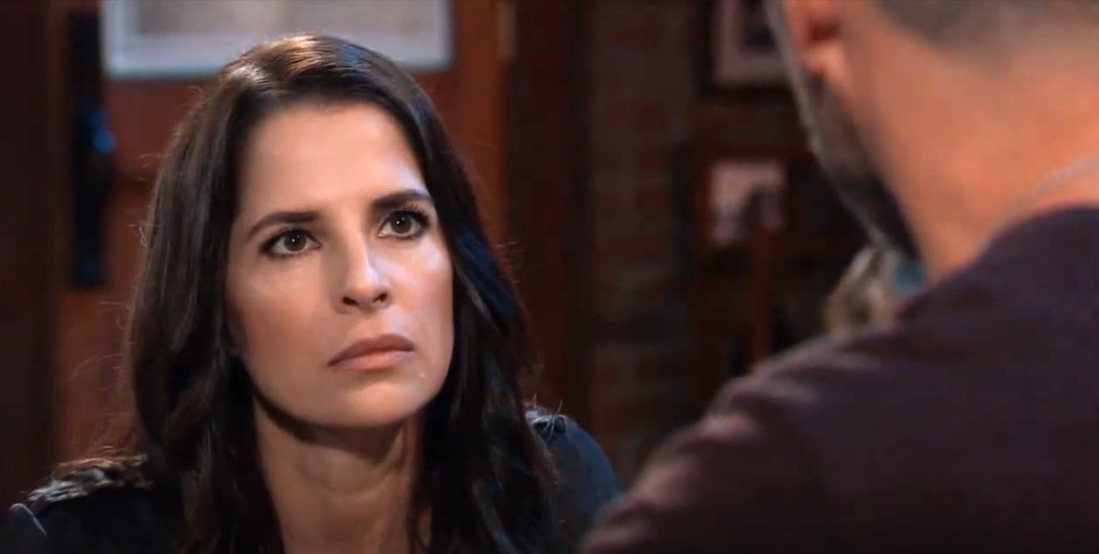 General Hospital spoilers tease that Sam McCall (Kelly Monaco) will unleash on her birth father, Julian Jerome (William DeVry) in a family meeting in an upcoming episode of GH!

Sam, her birth mother Alexis Davis (Nancy Lee Grahn) and her birth father Julian Jerome are seated at a table in a restaurant for a family meeting. It is a very unusual occurrence for Sam to be with Julian, let alone both of them at the same time. In a photo still of the scene in the current edition of Soap Opera Digest, Sam looks pretty upset.

Since Alexis represented Brad Cooper (Parry Shen) and Lucas Jones (Ryan Carnes) in their adoption of Willow Tait’s (Katelyn MacMullen) this is likely to be a meeting about Wiley Cooper-Jones who of course has now been revealed as Jonah Corinthos (Erik and Theodore Olson). Jonah’s birth certificate will have to be redone as well as his death certificate revoked, and a death certificate will need to be issued for Willow’s baby.

However, there could be one major paperwork snafu here – as General Hospital viewers will recall, last summer Sam and Julian went up to Albany, New York and pulled a scam to alter the original Wiley’s birth records so that Shiloh Archer (Coby Ryan McLaughlin) wouldn’t be shown as the birth father, and it went so far as asking Diane Miller (Carolyn Hennesy) to destroy the adoption records in an effort to prevent Shiloh from tracking down his and Willow’s son and trying to claim or kidnap him!

It is possible that Mercy Hospital, where Willow gave birth may have an original copy, but if anyone tries to amend the state copy then Julian and Sam’s scam could be exposed!

Sam may not be unleashing on Julian at this meeting because of finding out he knew about the swap, and even to Alexis and Sam he is not likely to tell the truth, especially not Sam, because of what her reaction would be! However, they may be meeting together trying to come up with a plan to not involve Lucas in trying to rectify paperwork and legal issues surrounding the adoption and death of the infant, simply because Lucas is so devastated, and they are trying to protect him from as much complicated aftermath as possible.

The subject of the birth records scam has probably come up and she may be venting rather than unleashing, about all the trouble that they went to in an effort to protect Wiley from his father, and now they’ve found out he wasn’t even the real Wiley!

And now that Sam is on parole with a nosy parole officer snooping around, it makes it very difficult for her and Julian to go to Albany again to try and pull another scam to put the right paperwork back in the folder, if Julian even still has it! He may have shredded it, again, in an effort to protect the baby from Shiloh!

This meeting, therefore likely has a dual purpose – to inform Alexis of what has transpired with the baby’s true identity and also to get legal advice on how to rectify all the paperwork problems!