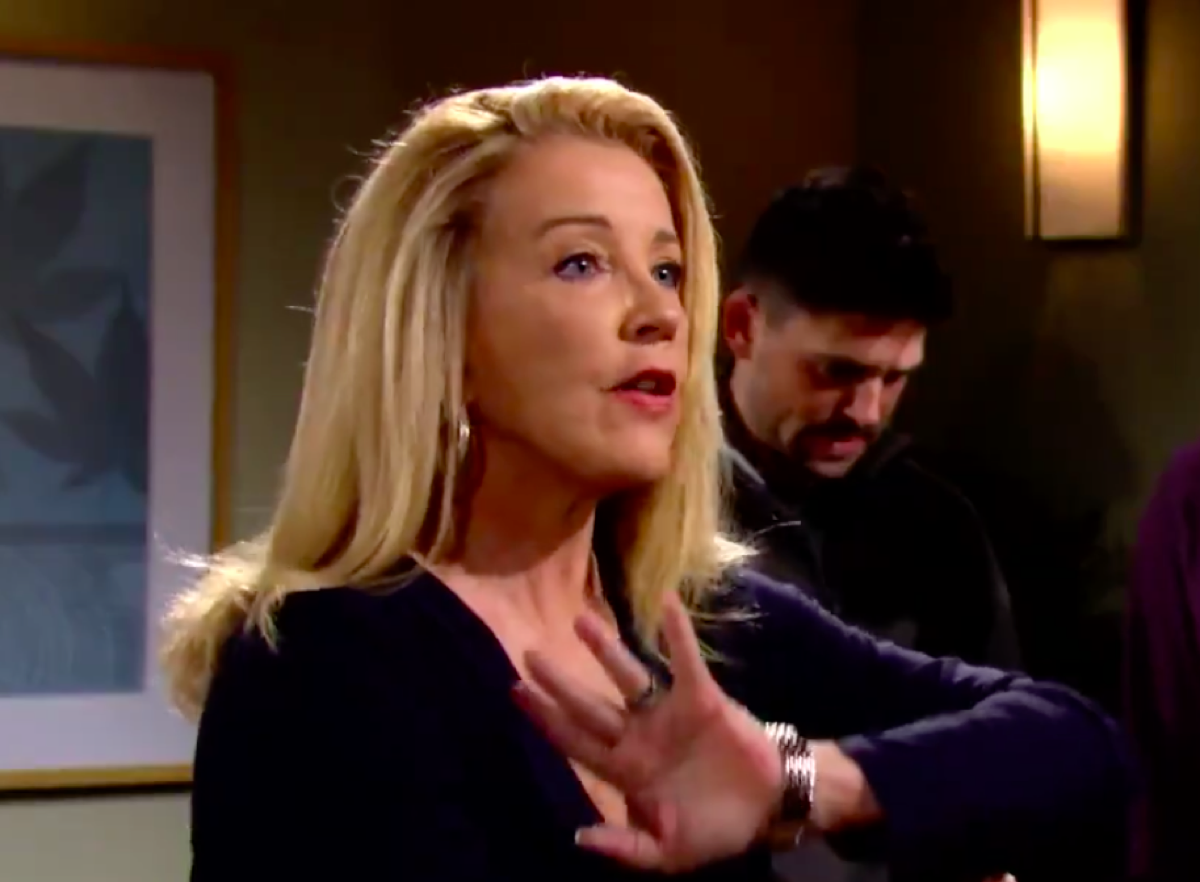 The Young and the Restless (Y&R) spoilers for Wednesday, February 26, tease that Chelsea Lawson (Melissa Claire Egan) and Adam Newman (Mark Grossman) will talk about their engagement at the penthouse – they’ll get married at the farm in Kansas again. They’ll decide to get married in the spring. They’ll talk about Adam returning to Newman Enterprises, and Chelsea will encourage him to do it.

Later, Chloe Mitchell (Elizabeth Hendrickson) will visit with Chelsea. They’ll talk about how Chelsea is sketching again. Chloe will think that Chelsea should go back into the designing business.

Next on Y&R, Victor Newman (Eric Braeden) will be furiously working on Newman business, while Nick Newman (Joshua Morrow) urges him to take it easy, saying that he needs to rest during this stressful time. Victor won’t really listen and will continue working away. Nick will soon learn that Adam is coming soon, so he’ll take off before warning his father not to let Adam take advantage.

Adam will arrive and say that he’s ready to step in and help the family, and he’ll admit that he hasn’t done so in the past but would like to now – by helping out at Newman Enterprises. Victor will say that he’ll have to think about it.

Next on Y&R, at the hospital, Nikki Newman (Melody Thomas Scott) will sit with an unconscious Victoria Newman (Amelia Heinle) and read to her. Nate Hastings (Sean Dominic) will appear and relay that all they can do at this point is wait and see. Sharon Newman (Sharon Case) will then appear to check on her and Victoria.

Nikki will tell Sharon that there’s no change in Victoria’s condition, and she’ll be concerned that Sharon looks exhausted. Nikki will insist on driving Sharon back to the ranch. Once they’re gone, Billy Abbott (Jason Thompson) will sneak into Victoria’s room and cry at her bedside.

Next on Y&R, both Kyle Abbott (Michael Mealor) and Summer Newman (Hunter King) will daydream about the other as they’re working. They’ll each have difficulty working and concentrating as all they can think about is each other. Pretty soon, Kyle will write a memo saying that they’ll be out for the rest of the day.

Next, at the Grand Phoenix, Theo Vanderway (Tyler Johnson) will run into Lola Rosales (Sasha Calle). Theo will learn that Lola will be opening her own restaurant, but he’ll be dismayed to learn that it will be in Miami. Lola will tell him that she’s not leaving Genoa City, and Theo will be happy about that.

Later, after Theo’s business meeting at the hotel, Lola will still be there, as she sensed that he had something else to say. After some back and forth, Theo will ask Lola if she’d go out with him sometime in the future, Lola will smile happily.

Young And The Restless Spoilers: Nick Newman Suspects Billy Abbott Was At The Hospital

Next on Y&R, back at the hospital, Billy will still be with Victoria, but he’ll leave as he hears Nick approaching. Nick will talk with his sister, telling her to fight, and telling her about Sharon’s cancer battle. He’ll then see photos of Victoria and Billy’s kids in her bed and look around to see if Billy is there.

Meanwhile, back at the Grand Phoenix, Billy will sit on the rooftop by himself. And at the Newman ranch, Nikki and Sharon will discuss Sharon’s cancer and her support system. Finally, on Wednesday’s new episode of Y&R, Nikki will tell Sharon to fight this and win, as the ladies share a nice moment.