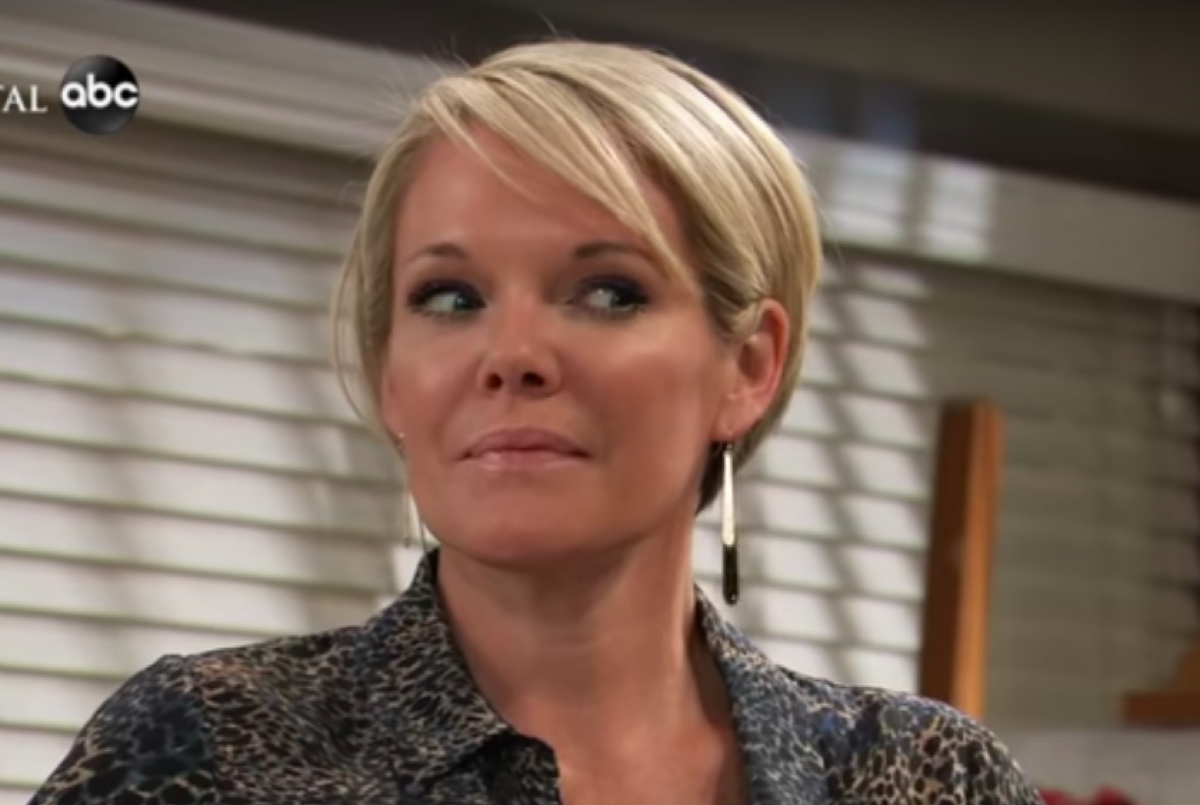 General Hospital’s Ava Jerome (Maura West) is visiting Avery Corinthos (Ava and Grace Scarola). Ava doesn’t like dealing with the armed guards. Carly Corinthos (Laura Wright) asks if Ava is going to introduce her daughter to her new husband. Carly tells Ava that Sonny will want to know how involved Nik will be in Avery’s life. Ava says she doesn’t like Avery living in a house under siege. Carly asks Ava if she has any idea how many people have died on Spoon Island.

GH Spoilers: Trina Robinson And Cameron Webber Are In Danger

General Hospital’s Franco Baldwin (Roger Howarth) helps Cameron Webber (William Lipton) with his cufflinks. Liz Baldwin (Rebecca Herbst) arrives and tells Cam how cute he looks. Nikolas Cassadine (Marcus Coloma) shows up at Liz’s house. Nik wants to donate some money to the hospital and wants Liz to tell him where it would best be utilized. Nik promises to try to find Hayden Barnes (Rebecca Budig) for Liz.

Liz is taking pictures of Cam before the dance. Trina Robinson (Sydney McKayla) arrives and Liz wants to take more pictures. Cameron puts a corsage on Trina. Trina wonders why her father hasn’t got there yet. Taggert is cornered by Cyrus’ men. Trina is upset that her father doesn’t show up to take pictures. Trina and Cam head to the dance. Franco gives Liz their anniversary gift. Trina and Cam’s driver is one of Cyrus’ men.

General Hospital’s Jason Morgan (Steve Burton) arrives and gives Sonny Corinthos (Maurice Benard) an update on Michael Corinthos (Chad Duell) and his son. Sonny doesn’t believe Nelle Benson (Chloe Lanier) and Brad Cooper (Parry Shen) pulled this off on their own. Marcus Taggert (Real Andrews) tells Jordan Ashford (Briana Nicole Henry) that he has a plan of his own and hangs up before visiting Sonny. Taggert tells Sonny they have a mutual enemy. Taggert talks about Cyrus and how Sonny has more free reign to get to him.

Jason and Sonny ask if Taggert is offering his help or asking for theirs. Taggert tells Jason talking to the DEA won’t do any good because they are beyond that working. Taggert leaves, Sonny believes every word he said. Someone follows Taggert after he leaves Sonny’s restaurant. Sonny says Taggert has to be desperate to come to him. Jason wonders why this is happening now. Laura shows up to speak to Sonny. Sonny is glad that Laura is out of the hospital. Sonny tells Laura everything is going to stay ok.

Laura wants to talk for real because Sonny cannot assure that. Sonny tells Laura that he didn’t start this. Laura tells Sonny how afraid the people on the piers are. Laura tells Sonny he is the only one who knows how to stop this thing. Laura came there as a friend, if Sonny can’t end this, she will. Sonny would not expect anything less. Laura leaves visibly upset.

General Hospital’s Brook Lynn Quartermaine (Amanda Setton) approaches Julian Jerome (William DeVry) who still insists he had nothing to do with the baby switch. Brook Lynn continues to threaten to go to Sonny with her suspicions. Brook Lynn tells Julian she wants him to help her get out of her contract. Brook Lynn wants Julian to break her manager’s fingers. Julian tells Brook Lynn there might be a better way to handle this.

General Hospital’s Curtis Ashford (Donnell Turner) visits Laura Collins (Genie Frances) who has been released from the hospital. Jordan arrives and Laura asks for an update. Laura wants to know if Jordan has any idea who could be stupid enough to go after Sonny. Jordan says they don’t have conclusive proof but she believes it is Cyrus Renault (Jeff Kober). Laura leaves to meet her driver.

Jordan says Laura has connections they don’t. Taggert is at the hospital after getting jumped by the men in the alley. Taggert managed to get the syringe that was supposed to be used to kill him. Jordan says Cyrus sent the men to kill Taggert just like the others. Jordan questions Taggert’s idea, he tells her she won’t like it. Taggert says tonight he crossed a line he thought he would never cross. Taggert tells Jordan that he went to Sonny tonight and offered to help him.

General Hospital’s Jossyln Jacks (Eden McCoy) wants Dev Cerci (Aston Arbab) to go to the dance. Dev tells Jossyln he is leaving Port Charles tomorrow. Carly interrupts Jossyln and Dev. Jossyln wants reassurance that Dev isn’t leaving because of her. Carly tries to reassure Jossyln that Dev believes this is what is best for him. Jossyln will miss Dev, he has been there for her since Oscar Nero (Garren Stitt) died.