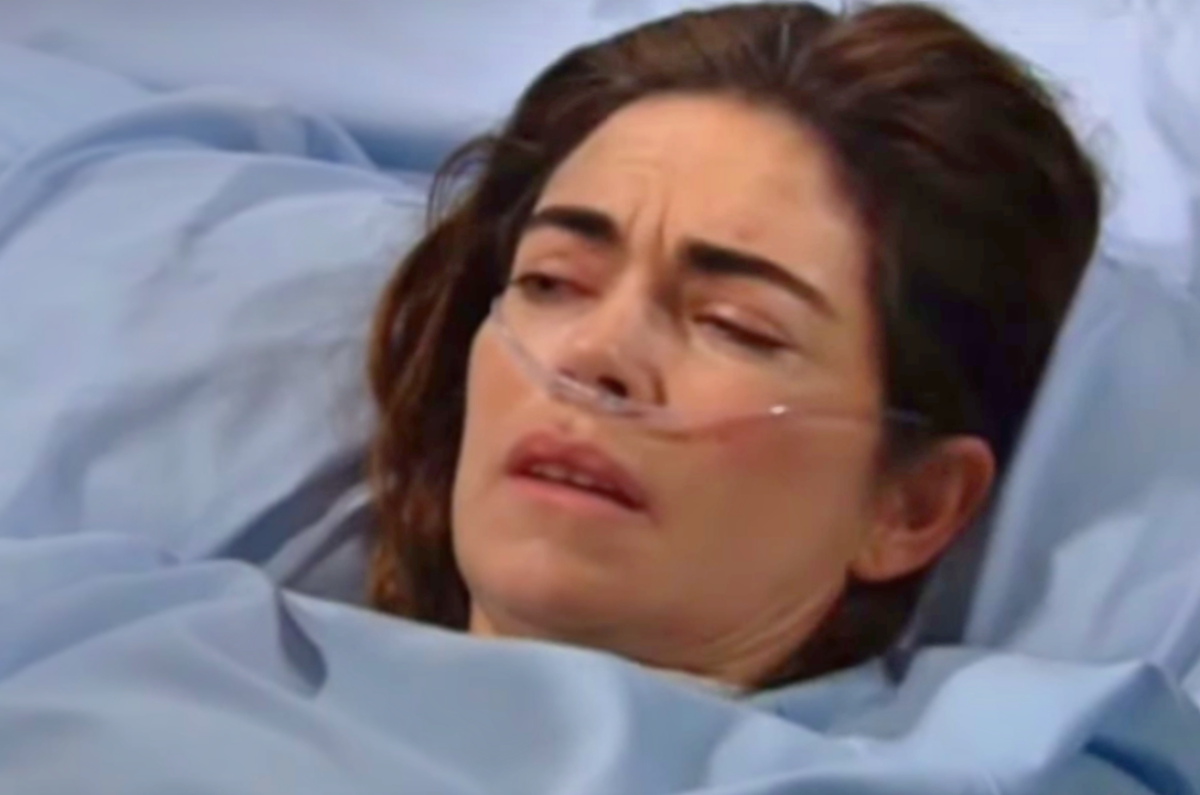 The Young and the Restless (Y&R) spoilers for Thursday, February 27, tease that Billy Abbott (Jason Thompson) will arrive at the Chancellor mansion, where Chloe Mitchell (Elizabeth Hendrickson) has been going through Bella Abbott’s (Sophie Pollono) clothes. They’ll talk a bit about Bella, and Chloe will note that she knows he’d do anything to take Victoria Newman’s (Amelia Heinle) pain away. He’ll thank her for her sentiment.

Meanwhile, at the hospital, Nikki Newman (Melody Thomas Scott) will sit with Victoria, talking with her daughter softly. She’ll eventually leave, and Billy will sneak in. He’ll tell her that he loves her and that she needs to pull through. Victoria will then wake up but tell him to get away from her. Nikki will return, angry with Billy for being there.

Next on Y&R, at Crimson Lights, Devon Hamilton (Bryton James) will get a mysterious text from an unknown number with a long series of numbers included. Meanwhile over at Society, Nate Hastings (Sean Dominic) and Elena Dawson (Brytni Sarpy) will discuss the medical clinic they’re starting, as well as Devon’s search for Colin Atkinson (Tristan Rogers).

Young And The Restless Spoilers: Abby Newman Thinks The Grand Phoenix Is Cursed

At the Grand Phoenix, Abby Newman (Melissa Ordway) will get updates from her lawyer via phone, then she’ll tell Chance Chancellor (Donny Boaz) that she believes that Phyllis Summers (Michelle Stafford) is behind the lawsuit. Chance will get a call from Devon about his text, and he’ll agree to meet him later. Chance and Abby will canoodle a bit, and after Chance goes, Abby will find out that a second lawsuit has been filed. She’ll think the hotel is cursed.

Next on Y&R, Chance will show up at Crimson Lights, and he and Devon will try to figure out what the cryptic text means. They’ll get Kevin Fisher (Greg Rikaart) involved, and he’ll figure out that it’s the number for an offshore bank account. After doing some research on his laptop, he’ll discover that the account has $2.475 billion in it and that it’s in Devon’s name.

Devon will then get another text from Colin that sounds like he’s giving the money back. The three men will then head to the Chancellor mansion, where Jill Abbott (Jess Walton) will reveal that she got a text from Colin as well. Chance will be shocked to learn that Devon wants to let Colin off the hook. Devon will think that Colin is broke and alone, which should be punishment enough.

Next on Y&R, Jill will talk privately with Chance about her love life and Colin in particular. She’ll indicate that she won’t forgive Colin, but that she never felt more alive than when she was with him. After Chance goes, Jill will be delivered a red rose.

Devon will head to Society where he’ll meet up with Elena and Nate. He’ll fill them in about getting all his money back, and they’ll be happy for him. After Nate leaves, Elena and Devon will chat, and Devon will indicate his desire to be more efficient with who he helps with his money going forward.

Back at the hospital, Nate will examine Victoria, while Billy and Nikki talk outside. Nikki will blast Billy, reminding him that he wasn’t welcome there. Billy will fire back that he has every right to be there, and he’ll be afraid that Victoria thinks he is the one who put her here. They’ll bicker, then Nate will come out and say that Victoria wants Nikki.

Finally, on Thursday’s new episode of Y&R, Victoria will ask Nikki what happened to her. Nikki will say that Billy won’t be coming back and that she should focus on getting better.