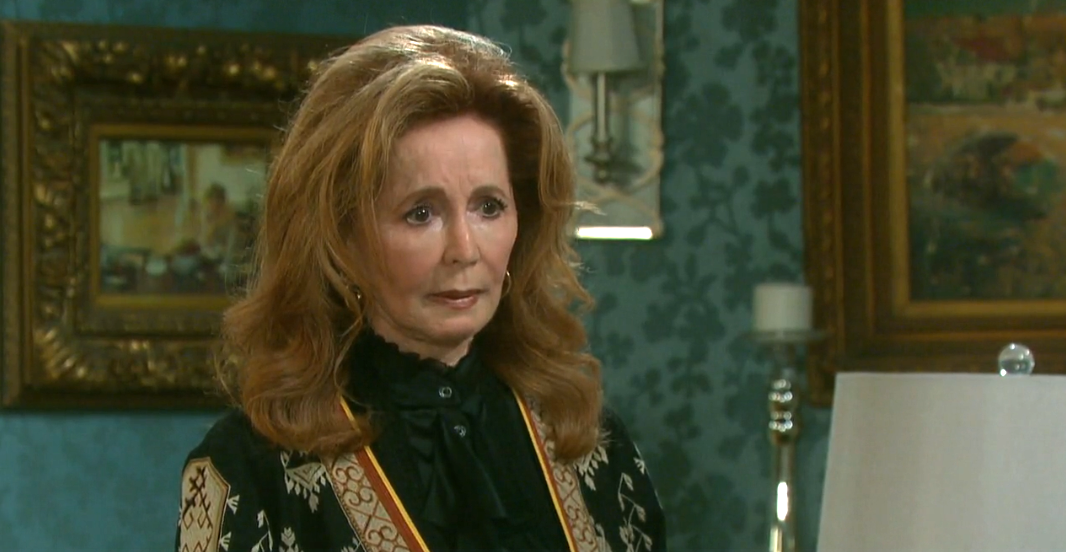 Days of Our Lives spoilers tease that Maggie Kiriakis (Suzanne Rogers) will apologize to Justin Kiriakis (Wally Kurth) for driving drunk, leading to the death of his beloved wife, Adrienne Kiriakis (Judi Evans) in an upcoming episode of Days of Our Lives!

Days of Our Lives viewers will recall that Maggie’s memory of the night that Adrienne was killed was triggered by her visit to Will Horton (Chandler Massey) in Statesville Prison, after which she started with having short flashes of memories.

When in Salem University Hospital with Xander Kiriakis (Paul Telfer) she started getting longer flashes of memories and was triggered further as Xander asked her if she was okay, finally getting some full memory of Xander asking if she was okay while in her car, and him asking where Sarah Horton (Linsey Godfrey) was! He had gone to the hospital when Sarah called him from Adrienne’s car and made up with her after a fight, and assumed that she was with Maggie.

As Maggie tried to take a nap upstairs, she couldn’t shake her memories and they came together, and she realized that she must have driven drunk and had a blackout! She then confronted Xander and her husband Victor Kiriakis (John Aniston) about her memories, because she also remembered Xander calling Victor that he’d found Maggie’s car in a ditch and Maggie passed out in it!

She then knew that she was the one responsible for Adrienne’s death, not Will, and she could have even killed her own daughter, for which she’s grateful Sarah and the baby survived!

Days of Our Lives Spoilers: Valerie And Julie Urge Eli To Give Lani Another Chance https://t.co/ngIgnvU9Bo pic.twitter.com/0pWJv58qHZ

Maggie tells Justin the whole thing from start to finish, how Adrienne had offered to take Sarah to the hospital when she went in labor instead of Maggie, because Maggie’s other daughter, Summer Townsend (Marie Wilson) had shown up unexpectedly and blamed Maggie for her terminal liver disease and her alcoholism, which she thought was passed on to her from Maggie.

She had also wanted Maggie to drink with her and had brought a large bottle of vodka. Maggie had offered to help Summer find a liver donor but Summer scoffed, telling Maggie that people whose livers fail because of alcohol abuse don’t qualify for liver transplants. She then left. Maggie kept looking at that bottle of vodka and had struggled with temptation, and tried to call Brady Black (Eric Martsolf) but got voicemail.

He, of course, was with Kristen DiMera (Stacy Haiduk) at the hospital because she went into labor the same day Sarah did! She tells Justin she had blocked out that entire time after Summer left and knew that she must have gotten drunk and had a blackout, but just had remembered the events of that night. She would have made things right and gotten Will exonerated much sooner if only she had remembered what happened! But now she needs to go to the police department and tell them what happened!