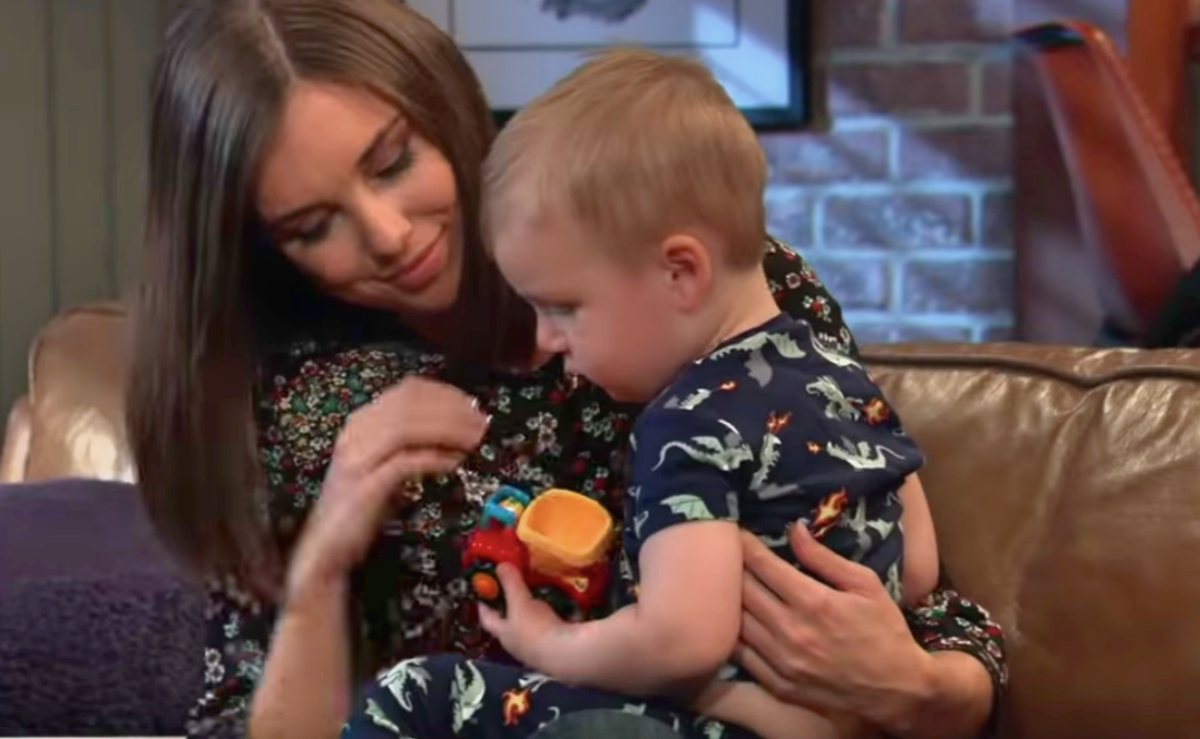 General Hospital (GH) spoilers for Friday, February 28, tease that Michael Corinthos (Chad Duell) will have an honest discussion with Sasha Gilmore (Sofia Mattsson). He’ll acknowledge that being Wiley Corinthos’ (Erik and Theo Olson) dad changes everything. Michael’s all in on being a good father, but is Sasha ready to add a kid to the mix?

GH fans can expect Sasha to do what’s right for her, so it sounds like she’ll make herself the priority. That’s fair since this is her life to live, but what does that really mean? Sasha might want to pump the brakes a bit. Her relationship with Michael could be put on hold while Sasha figures out what her future should look like. There’s also a chance Sasha will break things off completely, but we’ll see how it goes.

Meanwhile, Willow Tait (Katelyn MacMullen) will remain in despair over the recent Wiley revelations. She lost her son and now knows the fill-in Wiley isn’t her own child. As Willow struggles to cope, Harrison Chase (Josh Swickard) will be supportive as usual. He’ll talk about making “the very best choice for that little guy” – and Willow will feel like she knows what it is.

Will Willow still want to step up for Wiley as a mother figure or cut off all contact? Regardless, Michael will soon be shocked by Willow’s extreme approach. At the Metro Court, T.J. Ashford (Tajh Bellow) will be dealing with a different shocker. After T.J. proposed, Molly Lansing-Davis (Haley Pullos) admitted that although she loves T.J., she doesn’t want to marry him.

T.J. will be floored as he asks if she’s actually saying no. He understands that Molly has some harsh views on marriage, but he feels like theirs wouldn’t have to be like that. T.J. should be pretty upset that Molly’s just shutting him down like this.

General Hospital Spoilers: Jason Morgan Will Deliver A Warning Over The Phone

Of course, Molly may clarify that it’s only marriage that she doesn’t want. She still seems committed to a future with T.J. Molly apparently just wants one without a piece of paper to declare them together forever. Unfortunately, T.J.’s sure to be hurt and frustrated over their opposing perspectives.

Next, Jason Morgan (Steve Burton) will deliver a warning over the phone. He just got updates on Cameron Webber (William Lipton) and Trina Robinson’s (Sydney Mikayla) kidnapping, so he won’t want Elizabeth Baldwin (Rebecca Herbst) to panic. Jason knows Cyrus Renault’s (Jeff Kober) minion was the man behind the wheel, so he won’t want cops involved in this high-stakes situation.

However, Liz will refuse to stand by and do nothing. She’ll indeed call the police to report a kidnapping and take comfort from a nearby Franco Baldwin (Roger Howarth). As for Jason, he’ll apparently be involved in this big kidnapping crisis. General Hospital viewers know Marcus Taggert (Real Andrews) just showed up at the location he was given and demanded to see his daughter.

GH Spoilers: Curtis Ashford Will Do Something He May Regret

Cyrus’ goons brought Trina and Cameron out, but where do things go from here? Somewhere dangerous, that’s for sure! Curtis Ashford (Donnell Turner) is armed and waiting outside, so he’ll be part of the looming chaos. We also know Cameron will make a run for it at some point, but he’ll look back as more danger erupts. Will Cameron return to the scene to make sure Trina gets out alive?

Regardless, General Hospital spoilers say this will turn into a full-blown disaster. Multiple victims will be admitted to GH on Monday, so this Friday cliffhanger should be a real doozy! We’ll keep you posted as other news comes in. Stick with the ABC soap and don’t forget to check back often for the latest General Hospital spoilers, updates and news.