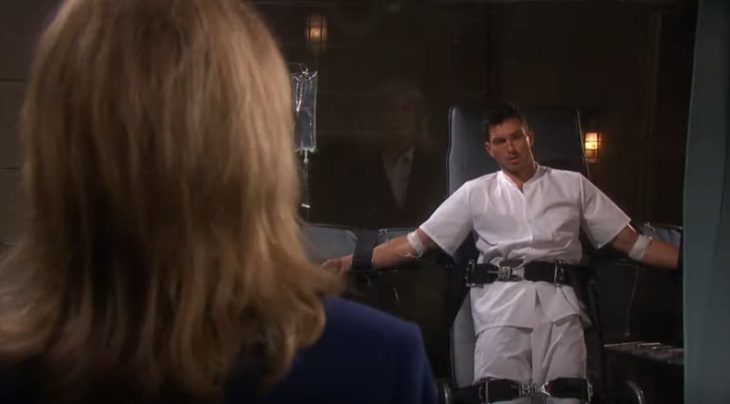 Ben Weston’s (Robert Scott Wilson) execution begins this week, with Will Horton (Chandler Massey) and Ciara Brady (Victoria Konefal) joining forces to stop it in time! Related to this, Evan Frears (Brock Kelly) reveals to Sonny Kiriakis (Freddie Smith) that he is David Ridgeway’s (Caleb and Kyler Ends) birth father as he holds him at gunpoint.

Days of Our Lives viewers will recall from last week that both Ciara and Police Commissioner Rafe Hernandez (Galen Gering) found out at approximately the same time that Evan has a criminal record and that his real name is Christian Maddox; plus that his DNA was identified by the federal database and it was present at the crime scene of Jordan Ridgeway’s (Chrishell Stause) murder. Ciara and Will go to the Kiriakis mansion to warn Sonny about Evan and find he’s in danger; Ciara gets Evan’s gun from him and takes him to Statesville Prison in a last ditch effort to exonerate Ben, but he’s already had two of the three lethal injections and flatlines!

Meanwhile, Kayla Brady (Mary Beth Evans) remains captive as Justin Kiriakis (Wally Kurth) asks for John Black’s (Drake Hogestyn) help in rescuing her after he ran into him at Salem University Hospital, where he had gone to look for Dr. Marlena Evans (Deidre Hall).

Stefano DiMera (Stephen Nichols) had demanded ten million dollars plus the delivery of his queen of the night, Marlena! Kayla is horrified when she hears Dr. Wilhelm Rolf (William Utay) talking to Stefano about a new way for Stefano to have Marlena, after she found out last week that Steve Johnson had a chip implanted in his brain with Stefano’s “essence”. Later in the week Justin and Marlena meet with Stefano in an effort to negotiate Kayla’s release; but in spite of their efforts, John and Justin’s plan goes terribly awry!

Days Of Our Lives Spoilers: Gabi Hernandez DiMera, Kate Roberts And Princess Gina Von Amberg Are Laid Into For Their Actions

Gabi Hernandez DiMera (Camila Banus) is laid into not once, but twice, by two different people for her twisted baby bargain scheme that got her charges dropped! First Kristen DiMera, (Stacy Haiduk) who is sympathetic to Eric Brady (Greg Vaughan) and Sarah Horton’s (Linsey Godfrey) plight of needing bone marrow to save Mackenzie “Mickey” Horton’s (Josephine and Rosalind May) life, tears into Gabi. Gabi had bargained with Mickey’s life, expecting Eric and Sarah to get District Attorney James Giddens (Terrell Tilford) to drop her charges in exchange for Gabi donating her bone marrow! Abe Carver (James Reynolds) got her charges dropped but for Mickey’s sake, not Gabi’s!

Later Julie Williams (Susan Seaforth Hayes) tears into Gabi for the same reason. Kate Roberts (Lauren Koslow) also gets blasted – by Roman Brady (Josh Taylor) for her having aided and abetted Stefano and Princess Gina Von Amberg aka Hope Brady (Kristian Alfonso)! Then Gina/Hope herself is confronted by Jennifer Deveraux (Melissa Reeves) for pushing her over the balcony of The Bistro, which led to Jennifer’s coma that had lasted a year!

Days Of Our Lives Spoilers: Xander Worries As Nicole Suspects A Deal With Dr. Raynor

Xander Kiriakis (Paul Telfer) gets worried when he runs into Dr. Raynor (Victoria Platt) who as Days of Our Lives viewers will recall, was paid for her silence concerning the baby swap that Victor Kiriakis (John Aniston) had forced him into doing when Sarah’s baby died – he swapped her with Kristen’s baby, which Victor specifically demanded, and which led to many terrible consequences. Later in the week Nicole Walker (Arianne Zucker) will suspect that Xander and Dr. Raynor are sharing some kind of secret, and she will begin to investigate.

Days Of Our Lives Spoilers: Chad DiMera Is Turned Into His Father’s Minion

Chad DiMera (Billy Flynn) is turned into his father’s minion by means of a substance that Stefano has been putting into his drinks over the past few days – this week it has an effect and he falls under his father’s spell. It looks like Chad becomes his pawn much as John Black did years ago, and is assigned a deadly mission, which he prepares to carry out!

That’s all for this week’s Five Key Takeaways from Days of Our Lives. Stay tuned to the show, and keep checking Days of Our Lives spoilers for all the latest news, updates and developments!