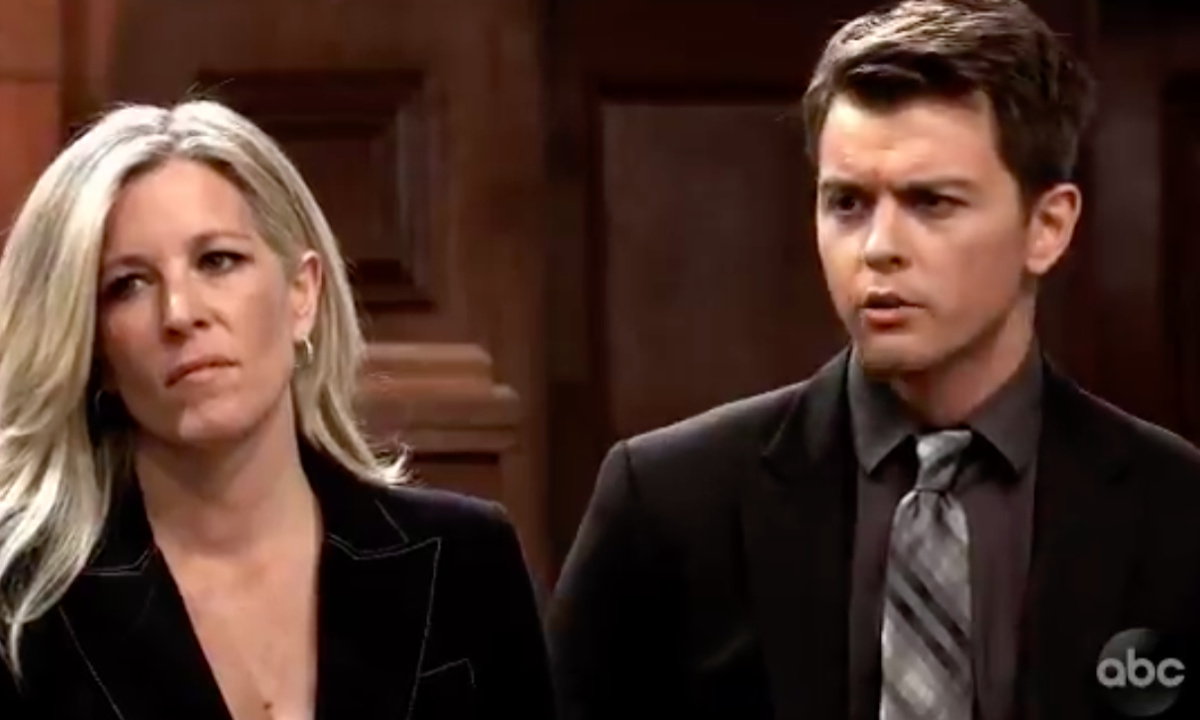 Brook Lynn will talk to Olivia Quartermaine (Lisa LoCicero) about possibly selling the shares on Wednesday. She may be testing the waters a bit to see how that would go over. A curious Olivia will wonder if there’s an actual offer on the table. Since Olivia knows someone appears to be plotting a takeover, she may be concerned about this sudden move and how vulnerable it could leave them.

Ned might try to put his foot down once he gets updates. He certainly won’t want Brook Lynn selling her shares in the company, but this isn’t his call to make. Their Brook Lynn’s shares, so she can do what she wants with them. Naturally, Valentin Cassadine (James Patrick Stuart) is counting on locking them in and pulling off a major victory.

Other General Hospital spoilers say Jordan Ashford (Briana Nicole Henry) will be done with all this danger. She’ll hope to put an end to it by turning herself in for her crimes. Jordan will want to stop Cyrus Renault’s (Jeff Kober) revenge plot, but Curtis Ashford (Donnell Turner) may try to talk her into another strategy.

Whatever the case, Jordan will get some infuriating news soon. She’ll blow her top on Thursday, so Wednesday’s GH episode could set the stage for another disaster. Will T.J. Ashford (Tajh Bellow) find himself in peril this time? That appears to be brewing before long, so don’t miss all the action.

Next, Sonny Corinthos (Maurice Benard) will focus on the task at hand. He’ll meet with Curtis and Jason Morgan (Steve Burton) to discuss their problem, which is obviously Cyrus. Every terrible problem needs a good solution, so Sonny will want to figure one out ASAP. He’ll do whatever it takes to shut down Cyrus’ deadly threat.

Speaking of threats, Carly Corinthos (Laura Wright) will make a few of those in the courtroom with Nelle Benson Archer (Chloe Lanier). It seems Nelle’s bombshell will help her walk out a free woman for the time being. That won’t go over well with Carly and Michael Corinthos (Chad Duell). They’ll just have to hope justice prevails in the end or take Nelle down another way.

Wednesday’s GH preview video shows Carly saying, “If I were you, I’d try not to attract God’s attention.” It sounds like Carly will overhear Nelle making some bold declaration and decide to chime in. Carly can never resist an opportunity to take a few jabs at Nelle, but you can bet she’ll get some in return.

Across town, Harrison Chase (Josh Swickard) will surprise Sasha Gilmore (Sofia Mattsson). He’ll show up at the Quartermaine mansion looking for Michael – and he’ll have a startling reason why. Chase will feel like Michael’s messing with Willow Tait’s (Katelyn MacMullen) head and needs to stop. He’ll seem downright angry about this on Wednesday, but maybe Sasha can help smooth things over.

It was never Michael’s intention to overstep or by pushy with Willow. He just gently encouraged Willow to remain part of Wiley Quartermaine-Corinthos’ (Erik and Theo Olson) life. Michael thought it’d best for all parties involved, but Chase may think Willow needs time and space. He’ll sense that Willow’s struggling with her new reality, so he’ll want Michael to stop making matters worse.

Fortunately, it appears Chase may have a change of heart sooner or later. He’ll wind up seeking advice from Michael on Wednesday, so perhaps Sasha will explain Michael’s goal and help Chase understand. As for Willow, she’ll apparently determine that she indeed wants to be there for Wiley. Willow will suggest that the more she thinks about it, the more the wants to – presumably meaning play a role in Wiley’s life.