Days of Our Lives Spoilers: Xander Is Upset When He Runs Into Dr. Raynor 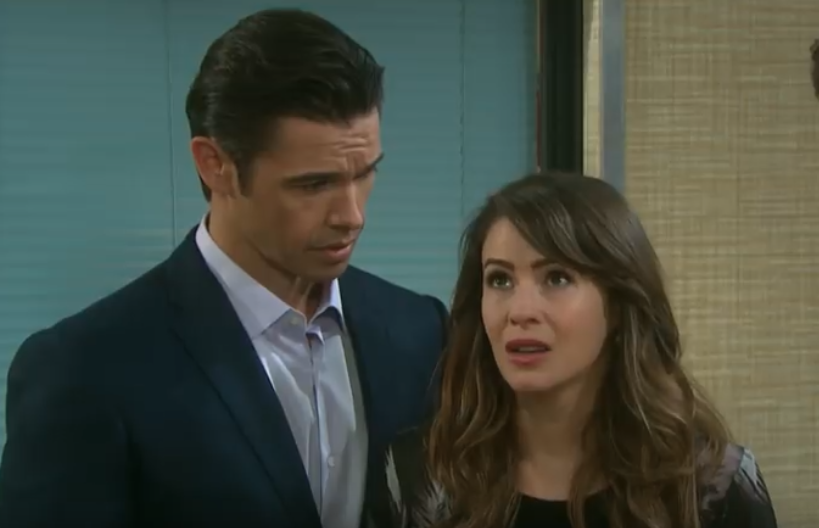 Days of Our Lives spoilers tease that Xander Kiriakis (Paul Telfer) will be upset when he runs into Dr. Raynor (Victoria Platt) who knows about the baby switch, in an upcoming episode of Days of Our Lives!

Dr. Raynor Was Paid Off For Her Silence By Victor Kiriakis And Xander Kiriakis

As Days of Our Lives viewers will recall, Dr. Raynor was paid off for her silence about the baby switch of the real Mackenzie Horton (Josephine and Rosalind May) and Rachel Isabella Black (Josephine and Rosalind May) when Mackenzie died and Victor Kiriakis (John Aniston) ordered Xander to switch her with Rachel. Dr. Raynor had witnessed the switch and when Xander runs into her again, he is upset, thinking that she was going to leave town with the money that was paid to her!

Days of Our Lives Spoilers Tuesday, March 3: Ciara And Will Work To Exonerate Ben – Ben’s Life With Ciara Flashes Before Him – Xander Is Upset https://t.co/DLISam0zMa pic.twitter.com/sWegaHsb3f

And yet, there she is! He sees her when he goes to the hospital to make sure that Mickey’s bone marrow transplant goes off without a hitch, which of course means that Gabi Hernandez DiMera (Camila Banus) had better not back out of donating! She will have the full wrath of both Xander and Victor bearing down on her if she does, not to mention Sarah, and Sarah can be as fierce as a wolverine when she’s mad!

Xander Kiriakis Calls Victor Kiriakis And Tells Him Dr. Raynor Is Still In Salem Working At The Hospital

Xander calls Victor and tells him that Dr. Raynor is still in Salem, and still working at Salem University Hospital! Victor is not pleased either and asks Xander if she saw him. She did. She didn’t seem to do or say anything that gave Xander the impression that she would make any trouble or tell any tales, but just the fact that she is there when they paid her enough to move far, far away and live handsomely for quite some time makes both Xander and Victor nervous, especially after having just gone through the experience of another secret they had kept coming out, that was framing Will Horton (Chandler Massey) for the motor vehicle death of Adrienne Kiriakis (Judi Evans) when it had really been Maggie Kiriakis (Suzanne Rogers), having driven drunk and blacked out. Xander had found her passed out behind the wheel, a bottle of vodka in the car, and the car in a ditch, and that is what she remembered along with the rest of the night’s tragedies.

Xander, in particular, cannot afford for the secret of the baby switch to come out! Sarah would be devastated, Kristen DiMera (Stacy Haiduk) would be out for his and Victor’s blood, and Brady Black (Eric Martsolf) wouldn’t be far behind her! All it would take would be Dr. Raynor having some type of agenda and telling someone what happened – or will she continue to blackmail Victor to keep the ugly secret? Little does Xander know that someone was snooping around Xander and Dr. Raynor and will think they have secrets together and will be determined to find out what they are!