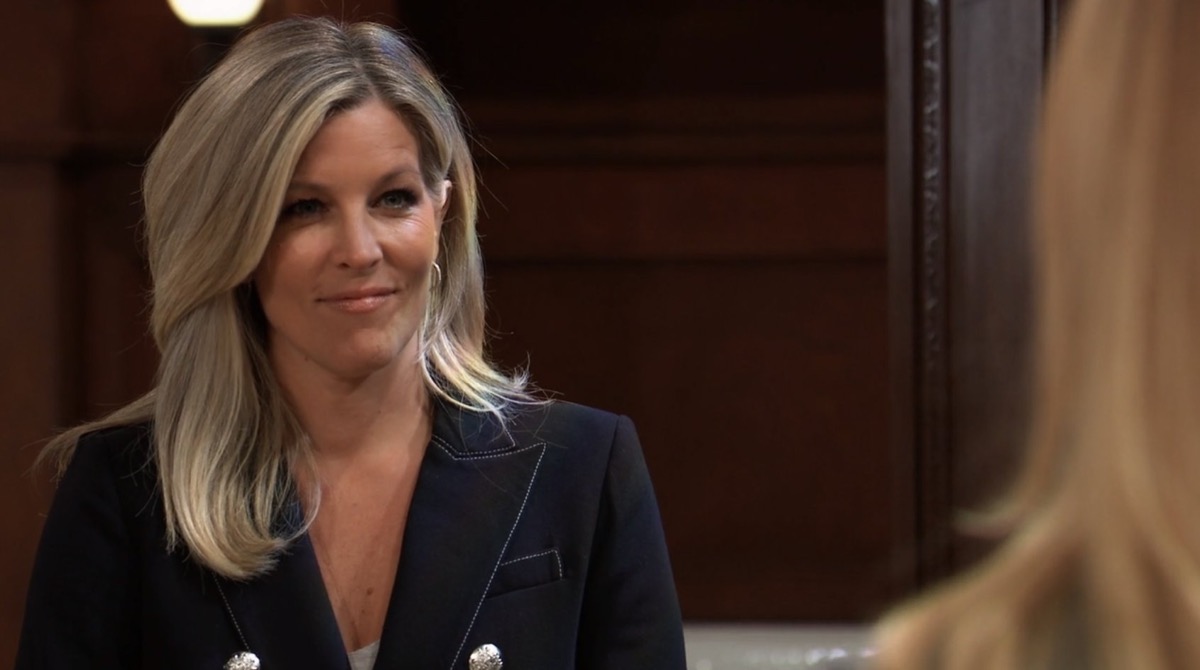 General Hospital (GH) spoilers for Thursday, March 5, tease that Ava Jerome (Maura West) will get a surprise visitor at the gallery. It appears Ava will somehow cross the line when it comes to Trina Robinson (Sydney Mikayla) – at least according to her mother! Dr. Portia Robinson (Brook Kerr) will blast Ava in Thursday’s episode and insist that Trina is her daughter, not Ava’s.

GH Spoilers: Ava Jerome Will Get A Surprise Visitor

Over with Molly Lansing-Davis (Haley Pullos), she’ll battle growing fears about T.J. Ashford (Tajh Bellow). Molly will open up to Sam McCall (Kelly Monaco) about T.J. staying out of touch. She’ll get that T.J. needed a chance to cool off after his marriage proposal rejection, but something just won’t feel right. Molly won’t think it’s like T.J. to go off the grid like this, so she may worry he’s in trouble.

It seems likely that T.J. has indeed become part of all the Cyrus Renault (Jeff Kober) drama. GH spoilers suggest more danger will erupt soon, but it’ll be Jordan’s temper that explodes for now. Thursday’s preview video shows Jordan yelling, “Wake the hell up!” She’ll get fierce and do whatever it takes to stop Cyrus from putting more Port Charles residents at risk.

Next, Sonny Corinthos (Maurice Benard) and Jason Morgan (Steve Burton) will grill Curtis Ashford (Donnell Turner) about Cyrus’ dirt on Jordan. They’ll hope for firm answers, so we’ll see how much Curtis divulges. Meanwhile, Carly Corinthos (Laura Wright) will make it clear that she’s prepared for battle. The war is on if Nelle wants to go up against Carly and her family!

Carly will assure Nelle that she’s ready and won’t think her enemy has a real shot at full custody. She’ll probably suggest Diane Miller (Carolyn Henessy) will tear Nelle to shreds, but Nelle will remain confident. She’s always convinced she can gain the upper hand, so she won’t fret about Carly’s outburst.

Other General Hospital spoilers say Anna Devane (Finola Hughes) will question Peter about Luna Industrial Enterprise. She’ll ask if Peter’s heard of it, but all roads lead to trouble for Peter. This will inevitably set up some other fire to put out, but he’ll have a plan to end his problems for good.

GH Spoilers: Peter August Will Hope To Find A Scapegoat

Peter will hope to find a scapegoat, so could Liesl Obrecht (Kathleen Gati) be the one he has in mind? General Hospital spoilers say Liesl will spar with Damian Spinelli (Bradford Anderson) in Thursday’s episode. It seems she’ll catch Spinelli digging around and wonder what he thinks he’s doing.