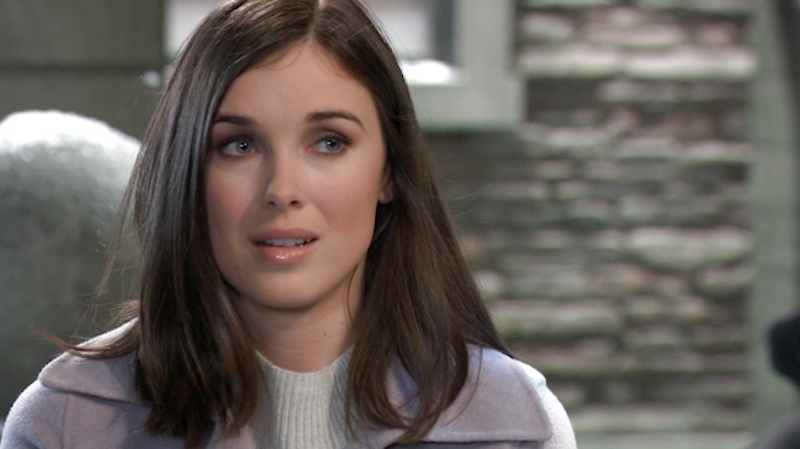 General Hospital spoilers tease that Detective Harrison Chase (Josh Swickard) will look to Michael Corinthos (Chad Duell) for advice to help Willow Tait (Katelyn MacMullen) cope with her grief and adjust to her new normal in and upcoming episode of GH!

As General Hospital viewers will recall, Willow took it pretty hard when she found out that the baby she gave up for adoption who was adopted to Lucas Jones (Ryan Carnes) and Brad Cooper (Parry Shen) had died of sudden infant death syndrome and the one she has gotten attached to over the last nearly two years is really Jonah Corinthos (Erik and Theodore Olson). She was devastated – she isolated herself from Chase for a while, lied about losing her work badge, told him she was going to work without it and wound up at “Jonah’s” grave to mourn Wiley! Chase tracked her down anyway, but since then she is trying to cope but having a very difficult time adjusting to her new “normal” – which for her, nothing will ever be normal again!

Longtime General Hospital viewers will recall that when Willow first came on the General Hospital canvas, she and Michael met in a grief group for parents who had lost children. Michael and she became friendly, but it took a long time for her to tell him that she was really grieving a child she had given up for adoption, whereas he was grieving one that had died – except now the tables are turned! Understandably, Willow is probably secretly envying Michael for his good news, and that his baby is the one who is alive but the problem is, she thought he was hers for nearly two years and had gotten attached to him as her baby – and now she has to break that attachment because it’s not healthy.

Michael may not have thought about that when he asked her to stay in Wiley/Jonah’s life in previous episodes of General Hospital. But the baby is already missing Lucas and Brad, and Michael will make sure that Lucas has time with him, but it won’t nearly be as much, but doesn’t want Willow to be someone else that Wiley/Jonah feels like he is losing! She may fear that she will not be able to disassociate Wiley/Jonah from her Wiley, and that being around him will either make her grief worse, or drive her into total denial that her baby is dead!

Chase is at a loss – he’s never dealt with death of a loved one and doesn’t know how to really make Willow feel any better – he doesn’t fully understand and she knows he doesn’t although he is trying so hard to support her. So he goes to Michael for advice. Michael felt that pain for the last two years or so when Jonah was assumed to be the baby in the ground. Michael will tell Chase that he wanted Willow around Wiley/Jonah for Wiley’s sake but he understands the pain too and her feeling like she has lost two babies.

Of course Willow is attached to Wiley/Jonah – and it is not a problem as long as she is able to convert her attachment from Wiley Cooper-Jones to Wiley/Jonah Corinthos. The baby is attached to her too, and that is Michael’s point. Michael tells Chase he will support Willow as much as he can and if he does so with Wiley/Jonah there, all the better – it’s up to her.