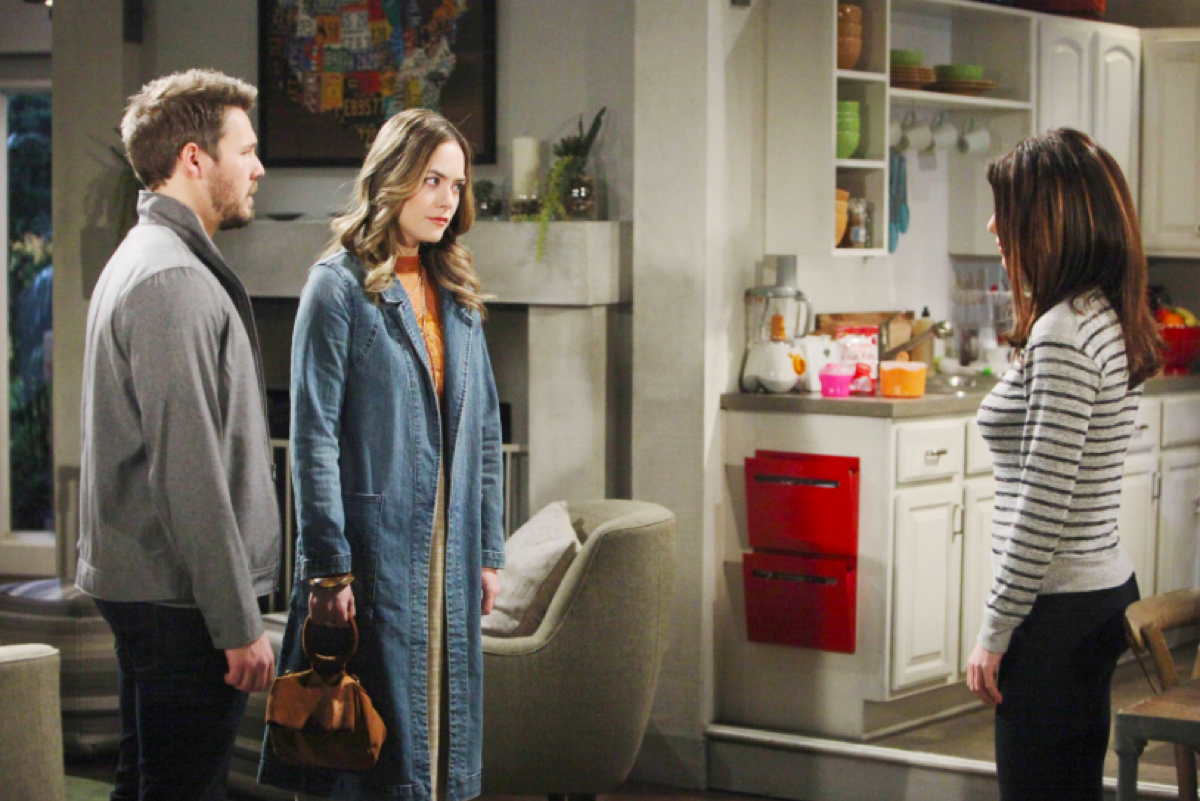 The Bold and the Beautiful spoilers for Monday, March 9, tease that Hope Logan (Annika Noelle) will find herself shocked by what she’s just heard. As B&B viewers know, Steffy Forrester (Jacqueline MacInnes Wood) has just confessed to Hope that Thomas Forrester (Matthew Atkinson) arranged for her to kiss Liam Spencer (Scott Clifton) on the cliff right as Hope was walking up to the scene.

Of course, this is a big revelation for Hope, since that kiss caused her to break off her relationship with Liam for good. She surmised that Liam still wasn’t over Steffy, and she ended their relationship, kicking Liam out of the cabin and separating him from their daughter Beth Spencer (River Davidson and Madeline Valdez).

Hope Logan Lashes Out At Steffy Forrester For Her Manipulation

According to B&B spoilers, Hope is going to be pretty disappointed with Steffy over hearing this news. Hope thought that all the manipulation between her and Steffy over Liam was in the past, so to hear that Steffy did something so devious will really be jarring for Hope. She’ll probably be pretty angry with Steffy, at least initially, and so we should see her let Steffy have it.

The Bold and the Beautiful spoilers say that Steffy will ultimately offer a heartfelt apology to Hope for her part in Thomas’ scheme, and she’ll probably explain how Thomas talked her into initiating the kiss with Liam by saying he was doing it for her and Kelly Spencer’s (Colette and Avalon Carlish) sake, so that Kelly could have her father around full-time.

It also appears that Liam will mediate between the two women as well, and he’ll probably let Hope know that he’s disappointed in Steffy, too, but that there’s something much more important here, and that’s that Thomas is still manipulating in order to drive a wedge between them and get her for himself. Probably after Hope calms down from her initial anger, she’ll feel the same.

Hope Logan Wants To Protect Douglas Forrester From His Father

According to the Bold and the Beautiful spoilers, Hope will quickly turn her thoughts to Douglas Forrester (Henry Joseph Samiri). She’ll realize that Liam and Brooke Forrester (Katherine Kelly Lang) have been right about Thomas all along, and that he’s been manipulating her, Douglas, and Zoe Buckingham (Kiara Barnes) with this sham wedding that’s coming up.

Ongoing B&B spoilers say that Hope, Liam, and Steffy will eventually come up with a plan to give Thomas exactly what he deserves. Hope will be mindful of protecting Douglas from any more manipulation, so it looks like she’ll set aside her anger toward Steffy and they’ll all work together for a common goal.

Meanwhile, on Monday’s new episode of B&B, Brooke and Bill Spencer (Don Diamont) will find themselves in an all-too-familiar situation. As B&B viewers know, Brooke just had a conversation with Ridge Forrester (Thorsten Kaye), during which Ridge urged her to see that Thomas was moving on with his life and to forgive him. He knows that Brooke won’t come back to him until the Thomas issue between them is resolved.

And right now, Brooke and Ridge’s marriage is really hanging by a thread. They’ve actually signed divorce papers, but Ridge hasn’t filed them yet because he’s still holding out hope that the two of them can work out their problems. But on Monday’s B&B episode, Brooke and Bill will do something that could very well cause Ridge to go ahead and file those divorce papers.

According to B&B spoilers, Brooke and Bill will find themselves together, perhaps lamenting about their shared animosity toward Thomas. At any rate, they’ll end up sharing a passionate kiss, which will apparently take them by surprise. This will be a major event, given that Bill is in a relationship with Katie Logan (Heather Tom) and that Brooke is trying to work out her differences in her marriage to Ridge.

It looks like Brooke and Bill will want to keep their kiss between them, since it would completely devastate Katie and Ridge if they were to find out. It looks like “Brill” will decide that they need to just put the kiss behind them and move on with their lives. We’ll see if it will really be that easy.