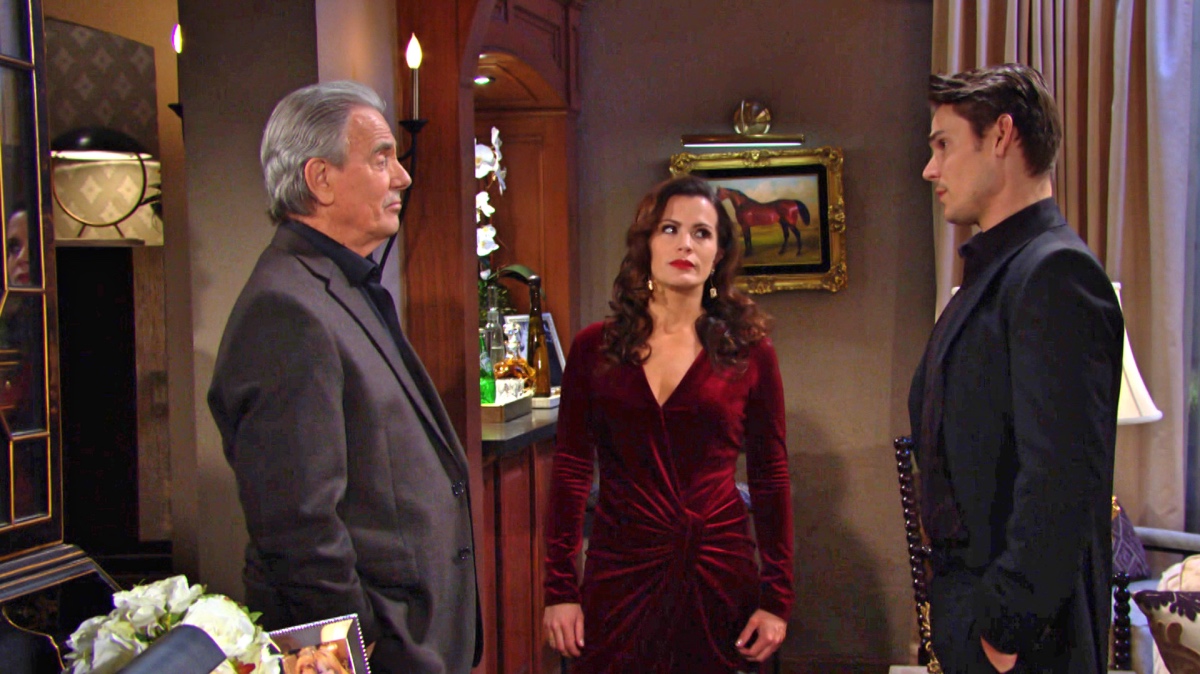 The Young and the Restless (Y&R) spoilers for Monday, March 9, tease that Nick Newman (Joshua Morrow) and Phyllis Summers (Michelle Stafford) will wake up the morning after the ice storm together. They’ll agree that last night was unexpected and they’ll kiss. Christian Newman (Alex Wilson) will materialize and Phyllis will say she has to go, and she’ll note that they shouldn’t let history repeat itself.

Phyllis will ask Nick if he can live with Adam Newman (Mark Grossman) getting the CEO spot at Newman Enterprises. Nick will say that he doesn’t want to get sucked back in at Newman, but Phyllis will point out that Nick could prevent a lot of problems if he keeps Adam from trashing the family company.

Next on Y&R, over at Society, Summer Newman (Hunter King) and Kyle Abbott (Michael Mealor) will wake up and see Lola Rosales (Sasha Calle) and Theo Vanderway (Tyler Johnson) snoozing together across the room. That will preoccupy Kyle, and later Theo will note to Lola that it served Kyle right for flaunting his relationship with Summer. Theo will try to kiss Lola, but she’ll stop him – she’ll need to be sure that this is right for her before they take the next step. Theo will say she’s worth the wait.

‘The Young and the Restless’ Spoilers: Nick Interested In Phick Reunion – Phyllis Wants It Too

Next on Y&R, Billy Abbott (Jason Thompson) will wake up lying next to Amanda Sinclair (Mishael Morgan). Soon, she’ll wake up and say that she slept very well for the first time since the Ripley Turner (Christian Keyes) ordeal. Amanda will go to shower while Billy will get them some breakfast. Later, Amanda will say that she feels free now that Ripley is behind bars.

Billy will say that he feels the same when he’s with her. Amanda will note that things are pretty complicated with the two of them. He’ll say that they’re worth taking a chance on, since it feels right. Billy will kiss her, then after a pause, Amanda will kiss him passionately. They’ll mutually decide that Billy should leave.

Next on Y&R, at the Newman ranch, Adam and Victor Newman (Eric Braeden) will talk a bit about Connor Newman (Judah Mackey) and Victor’s talk with Connor about toughening up. They’ll begin to discuss Adam and the CEO position, when Victor gets a call from Nick saying that he wants the position. Adam will be furious.

Chelsea Lawson (Melissa Claire Egan) and Nikki Newman (Melody Thomas Scott) will appear as Adam and Victor are arguing – Adam will think that Nick took the job to keep Adam from it, and he’ll accuse Victor of playing him. Adam will tell Victor that they might not be able to come back from this. Later, Victor will tell Nikki that he intended to make Adam CEO, but that Nick was his first choice.

Meanwhile, Summer will show up back at Nick’s place and they’ll catch up on what happened during the ice storm. She’ll tell Nick about spending the night at Society, and Nick will say that he and Phyllis hung out at the house. Nick will tell Summer about taking the CEO position at Newman Enterprises, and she’ll be proud of her dad.

Next on Y&R, Kyle and Theo will interact at Jabot. Theo will have a pitch for Kyle about a new social media campaign, but Kyle will criticize it. Theo will call him out on being upset and having a personal beef with him, and he’ll add that he intends on being there for Lola in all the ways that Kyle wasn’t. Kyle will ask if Theo really cares about Lola, or if this is just another way to stick it to him. Theo will say that he thinks Lola is very special, and that upsetting Kyle is just a bonus.

Meanwhile, back at Society, Summer will arrive to retrieve her scarf…and to warn Lola about Theo. She’ll say that Theo can be fun, but that he can also be a user who holds a serious grudge. Lola really won’t want to hear it, but Summer will continue, saying that Theo seems to be a better version of himself with Lola and that if they got together, she’d be happy for the two of them.

Over at Crimson Lights, Phyllis and Chelsea will meet up. Chelsea will learn that Phyllis spent the night at Nick’s during the storm, and Phyllis will jab Chelsea about getting her Grand Phoenix shares.

Y&R Spoilers: Phyllis Summers Realizes That She Was Burglarized

Next on Y&R, Phyllis will return to the Grand Phoenix, and she’ll see a used towel. She’ll soon realize that her thumb drive is gone and that her laptop is soaking wet and ruined. She’ll say, “You think you’ve won? Think again.”

Finally, on Monday’s new episode of Y&R, Adam and Chelsea will be at their penthouse. Chelsea will know that Adam’s going to want revenge on Victor for giving Nick the CEO position. She’ll tell Adam that she’s with him on this and will help him win.