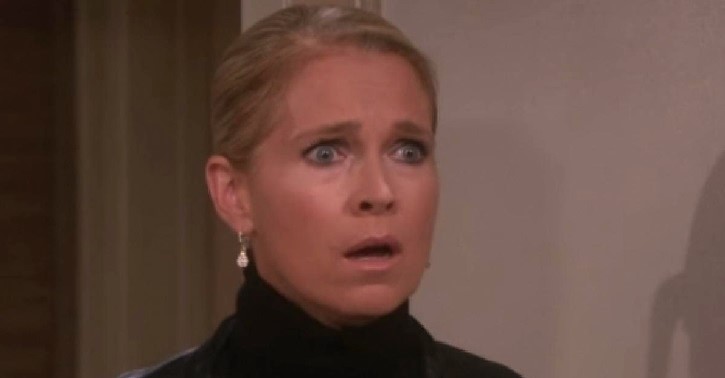 Days of Our Lives spoilers tease that Jennifer Deveraux (Melissa Reeves) will have an intense confrontation with Princess Gina Von Amberg aka “Hope Brady” (Kristian Alfonso) in an upcoming episode of Days of Our Lives!

Days of Our Lives viewers will recall that Princess Gina AKA Hope threw Jennifer over a balcony railing onto the Horton Town Square below, when she came upon Jennifer viewing Dr. Wilhelm Rolf’s (William Utay) flash drive with the plans for turning Hope into Gina. As a result, Jennifer was in a coma that lasted an entire year, and just recently has gotten her full memory back of that night.

It happened right after Jack Deveraux (Matthew Ashford) and she got married in a double wedding with Justin Kiriakis (Wally Kurth) and Adrienne Kiriakis, (Judi Evans) her close friend and sister in law, who she found out had died during that year that she was in a coma. Jennifer was devastated over that horrible news, having asked for Adrienne shortly after she woke up! Now, after returning from Africa where she and her family went to pay their last respects to her father, the late Bill Horton (originally Edward Mallory) it’s time to deal with Gina/Hope!

Days of Our Lives Spoilers: This Is Not The First Time Hope Brady Had Been Turned Into Princess Gina Von Amberg

Longtime Days of Our Lives viewers will recall that this is not the first time that Hope has been turned into Princess Gina. Rolf implanted a control chip in her brain years ago so that Stefano DiMera (then Joseph Mascolo) could control her; it had all the memories and personality of the real Princess Gina, just like Steve Johnson (Stephen Nichols) now has all the memories and personality of Stefano.

At that time Stefano controlled Hope/Gina via satellite through a device in his wristwatch. Visionary Bionics has been in business for a long, long time! Rolf installed an upgrade in her neck before the one year time jump, and Stefano no longer has to control her, she is automatically Gina. Jennifer, however remembers when that happened, as does Shawn Brady (Brandon Beemer) although he was very young at the time when it originally happened.

Jennifer will confront Gina for pushing her over the balcony of The Bistro but she will also likely try to get through the Gina persona to Hope! Jennifer and Hope were raised together for part of their life after Bill Horton went to Africa and Hope was living with Tom and Alice Horton (Macdonald Carey, Frances Reid) so they are, when Hope is herself, more like sisters than they are like cousins. It will be very important for Jennifer to distinguish between her cousin Hope and Princess Gina, who has taken over her consciousness through the chip in her brain that has been there for years. She doesn’t want to hurt Hope but she might want to hurt Gina!