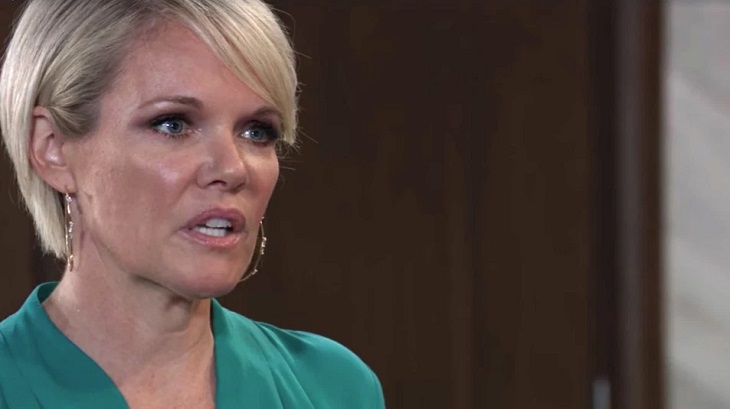 General Hospital (GH) spoilers tease that Ava is on a mission that seems peculiar to most people. Most people would be angry and upset to catch their spouse cheating. But for Ava Jerome (Maura West) , she has a fortune riding on. As viewers know. Ava and Nikolas Cassadine (Marcus Coloma) agreed on a post nuptial contract that said if either of them cheat on their marriage vows, the other spouse gets the entire Cassadine fortune in their divorce.

Ava had already been making some moves to bring Nikolas in close proximity with a couple of his exes. She has already started nudging Elizabeth Webber (Rebecca Herbst) toward Nikolas, who share a romantic history. But Elizabeth is married to her good friend Franco Baldwin (Roger Howarth). This shows just how little Ava care for anyone besides herself. She is perfectly willing to ruin Franco and Elizabeth’s marriage if it means getting what she wants. But Elizabeth and Franco have worked too hard to be together, so it would be quite cruel if Ava messed with them now.

General Hospital Spoilers: Nikolas has fought too hard for his fortune

Nikolas has spent the better part of the last three years trying to get his fortune back from Valentin Cassadine (James Patrick Stuart) to let one sexual act take it all away from him. But what if he believes Ava has already cheated? Nikolas would have no reason to stay faithful if he thinks Ava already broke her vows, It seems likely that Ava will approach Franco with an idea. If they can convince Nikolas that they are having an affair, Nikolas would likely run straight to Elizabeth with the news.

General Hospital Rumors: Is Marcus Really Dead – Or Is It All Part Of A Plan? https://t.co/BKdKUxwiuK

General Hospital Spoilers:There is a major flaw with this plan

It seems unlikely that Franco would go along with this plan because it would mislead Elizabeth and have her believe that Franco has been unfaithful. Hopefully, Ava even ask such a thing of her old friend, But she could always make Nikolas think she and Franco are carrying on an affair without Franco knowing anything about it! This has the potential to get very messy.

Will Ava get Nikolas to cheat if she can make him believe that she already has? Will she ask Franco to go along with her scheme or will she go through with her reckless plan without Franco’s knowledge? Only time will tell, so stay tuned to General Hospital airing weekdays on ABC. And don’t forget to check back here regularly for all your General Hospital news, information and spoilers!