General Hospital Spoilers: Is Violet Going To Do Something Scary To Reunite Finn And Anna? 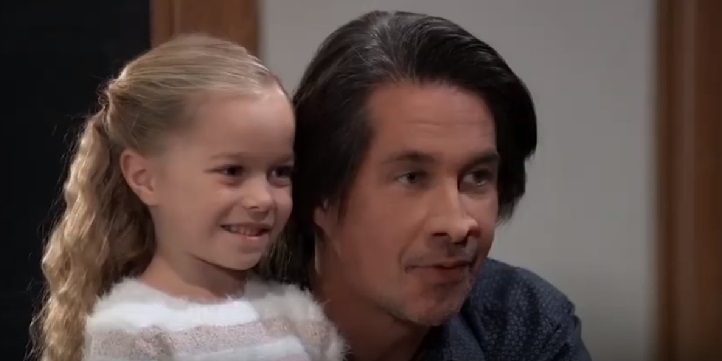 General Hospital spoilers reveal that one young lady is very sad about the separation between the adults in her life. Does this mean that she is about to travel a well-worn path previously walked by other Port Charles kiddos?

GH has a reputation for showcasing particularly precocious youngsters, and Violet (Jophielle Love) could be about to join the club.  Will she sink to sneaky shenanigans to get Fanna back on track and exactly where she wants them?

Violet is new to town, but Port Charles has a rich history of youngsters wise beyond their years, who, when stretched to their wit’s end do whatever they can to outwit the adults!

The prime example of this trend is Spencer (Nicolas Bechtel). What hasn’t he done to bend his loved ones to his will and do his bidding? He tried to rig a mayoral election in favor of his grandmother and is infamous for telling little white lies in a bid to get his way.

General Hospital Spoilers: Michael Hands Over ELQ, Will He Ever Get Company Back?https://t.co/86lbzAaqB8

Right now he’s smarting because his father outwitted him by pretending to be dead—there’s no surprise where Spencer got his deceptive gene from!

Charlotte (Scarlett Fernandez) has taken her cue from crafty Spencer, and lately has been letting her emotions get the best of her. How else to explain cutting up a picture of Sasha (Sofia Mattsson), her beloved Nina’s enemy, and lying about it?

Thankfully she’s seemed to put her bullying past to rest, but clearly she still has difficulty taking the direct and honest route in life.

These are just two examples of precocious youth on GH, and by the looks of things, a third sneaky charmer could be about to take center stage.

Violet is giving serious hints that she is feeling blue, and it’s understandable since her mother Hayden (Rebecca Budig) abandoned her with a father she barely knew, and his girlfriend. Finn (Michael Easton) and Anna (Finola Hughes) were thrust into parenthood when Hayden left town barely two minutes after telling Finn Violet is his daughter.

Ironically, Finn dumped Anna to keep his girl safe. This week savvy Violet manipulated Finn to leave her alone with Anna then later let both of them know she misses Anna, going so far as tell them that her stuffed animals separated, hint, hint! Does she have something sinister up her sleeve to get these two back together? Tune in and find out!