The Bold and the Beautiful Weekly Spoilers March 9 to March 13: Thomas and Zoe’s Wedding Begins As His Plan Unravels 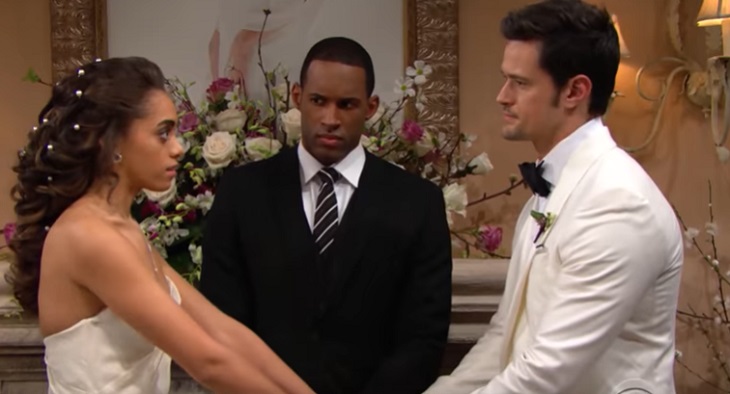 The Bold and the Beautiful promo for the week of March 9th thru March 13th indicates that Thomas Forrester (Matthew Atkinson) and Zoe Buckingham (Kiara Barnes) begins as his plan unravels.

For the past few weeks, B&B fans have watched as Thomas used Zoe in his plan to win Hope Logan (Annika Noelle). Thomas believes that by making Hope jealous, she’ll realize she’s in love with him.

Aside from using Zoe, Thomas is also using his son Douglas Forrester (Henry Joseph Samiri) as part of his plot. Douglas wants his dad with Hope, not Zoe. Thomas wants the same thing and asks his son to convince Hope to marry him.

Thomas believes that Hope will eventually come around, and to speed things up he proposed to Zoe. This week the couple is preparing for their big day, but it won’t be without drama.

Weeks ago Thomas used his sister as part of his plot to break up Hope and Liam Spencer (Scott Clifton). When Hope was on her way to Steffy’s house, Thomas ordered his sister to kiss Liam so Hope would see it.

Thomas plan worked, but Steffy’s conscience weighed heavily on her. Between her guilt and her anger towards Thomas for his manipulation, Steffy can’t take it anymore.

This week she confesses about the kiss and informs Hope that Thomas is still obsessed with her. She also reveals that Thomas’ relationship with Zoe is part of a plot to get Hope.

Steffy doesn’t care if this ruins her relationship with her brother. He’s ruing other people’s lives, including his son’s. Steffy can’t stand by and watch as Thomas continues to manipulate Douglas, Hope, and many others.  She decides it’s time to put a stop to him, and the first step is revealing the truth to Hope and Liam.

Upon learning the truth about Thomas, Hope is furious.  She believed Thomas was on the road to redemption, but he’s still a sociopath. Hope is angry that Thomas would use his son as part of his sick plot to get her.  Thomas’ actions have hurt her, Douglas, Zoe, and many others.

Liam puts it best when he says Thomas has to pay for all the lives he’s been toying with. Hope’s in agreement, and together with Liam and Steffy they plot payback towards Thomas.  With the wedding to begin soon, Hope says that will be the day of Thomas’ reckoning.  So how will Hope make Thomas pay for what he’s done?

B&B fans will have to tune in to see the drama unfold on Thomas and Zoe’s wedding day. Check Hollywood Hiccups often for updates, news, rumors, and spoilers!