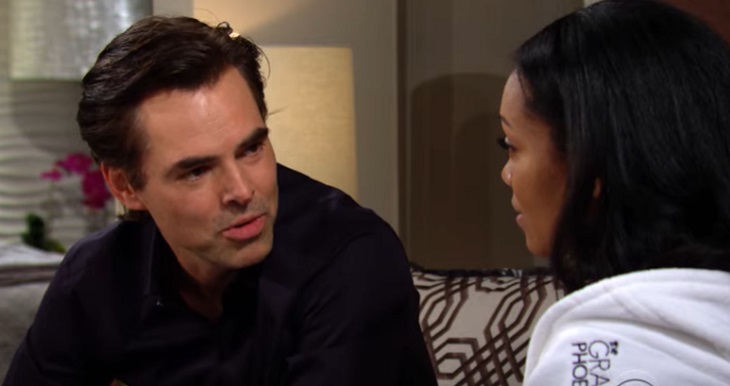 The Young and The Restless spoilers tease that this week on The Young and The Restless, Billy Abbott (Jason Thompson) and Amanda Sinclair (Mishael Morgan) will become closer and kiss, Adam Newman (Mark Grossman) will confront his father for giving the temporary CEO job to Nick Newman (Joshua Morrow), and Chelsea Lawson (Melissa Claire Egan) will offer to help Adam get that CEO chair!

Billy and Amanda will spend the night together, which will begin because Amanda is traumatized and afraid after Ripley Turner (Christian Keyes) stabbed Victoria Newman (Amelia Heinle) at the Newman gala, after mistaking her for Amanda. Then he was caught by police on the way back to Genoa City, but with weapons proving, he was on his way to finish off Amanda.

Even though he was captured and is in jail, Amanda is still scared – Billy starts out the night by sleeping on the couch in her hotel suite, but winds up in bed beside her to comfort her because she awakens, screaming, from a nightmare about Ripley. When they awaken and get up, Billy tells her that there is a reason that they are drawn to one another, and that something about it feels right. He tells her he thinks that she already knows that, and then they kiss! They will continue to define what they feel towards one another and decide what their relationship will be in upcoming episodes.

The Young and The Restless – Adam Newman Confronts Victor Newman

At the Newman ranch, after Nick Newman calls their father and decides he will fill in for Victoria as Newman CEO since it’s temporary, Adam Newman confronts Victor, telling him that right now on the spur of the moment Nick decided he wanted to be CEO, and points his finger in Victor’s face, and tells him that he played him! Adam is furious and disappointed; then there is a scene from earlier, presumably, as Nick warns Victor that Adam will come after Newman Enterprises, and Victor assures Nick that Adam will fail if he tries that, over a scene of Nick working on a laptop at Victoria’s desk.

As viewers of the Young and The Restless know, Victor did seem to want to give Adam a chance – but Nick had been his first choice to take over as CEO for Victoria as she continues to recover from the stabbing, which left her in very serious condition with a lacerated lung and liver and had been in a medically induced coma for several days.

Chelsea Lawson, (Melissa Claire Egan) who had gone to Victor and interceded with him on Adam’s behalf for the temporary CEO job, is furious when he is turned down for it in favor of Nick, who only seemed to want it now that Adam had a chance for it. Chelsea tells Adam if he wants that chair as CEO, she’s going to help him get there! Chelsea wants Adam to feel a full part of his family as much as he wants to be, she and he both are tired of feeling like Newman outsiders!