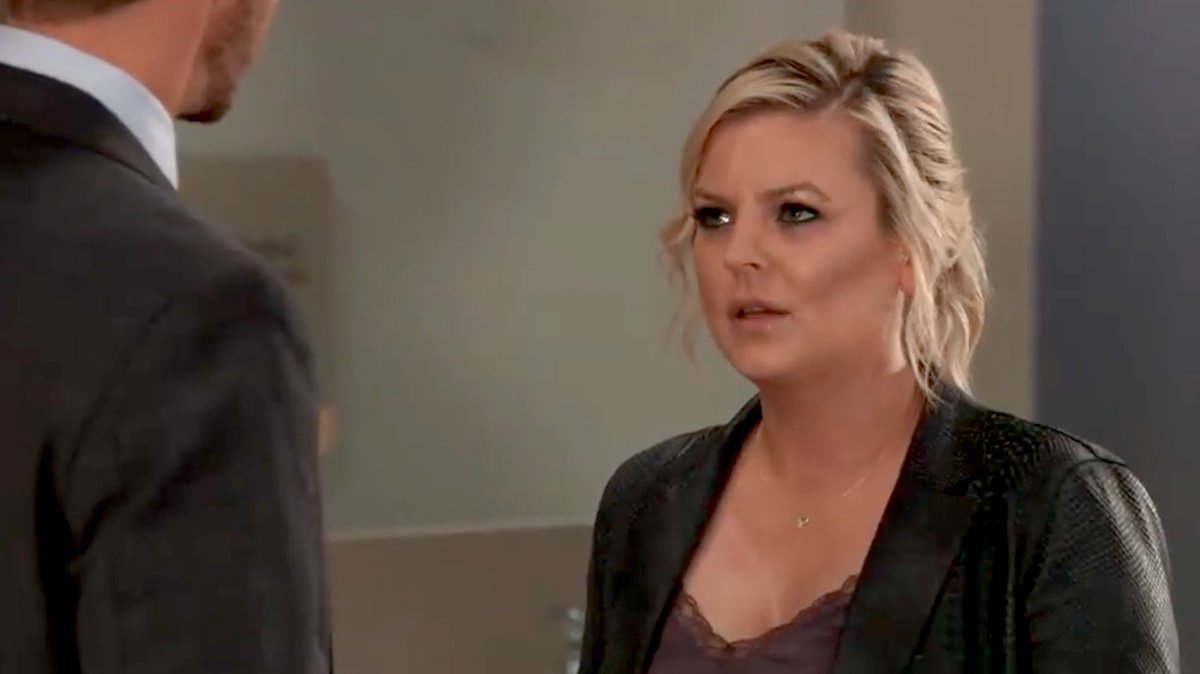 Maxie Jones Is Shocked When Liesl Obrecht Is Arrested

Maxie is shocked when Liesl Obrecht, (Kathleen Gati) her former mother-in-law is arrested not only for the two attempts on Dr. Andre Maddox’s (Anthony Montgomery) life, but also on the life of Liesl’s good friend – and one of her only friends – Franco Baldwin (Roger Howarth) and also for the presumed death of Drew Cain (Billy Miller)! General Hospital viewers will recall when Peter got the text and told her about it in Friday’s episode; she had truly believed that Liesl had reformed, and she doesn’t know how she is going to explain this to baby James West (Owen and Curtis Rufca) – and she is concerned that he will miss his Oma (German for Grandma)! Peter held her as she sobbed in his arms. However, her baby daddy, Spinelli will not give up on his suspicions of Peter, and is determined to rescue “Maximista” from him whether she believes him or wants to be rescued or not!

Anna Devane (Finola Hughes) was quick to arrest Liesl after she got a text about the investigation into Peter, and saw that another company that he had been tied to, Lumina Industrial Enterprises, also had another familiar name working there at the time – Liesl! She jumped on it, after the WSB found David Black (Lon Gowan), the gunman who Peter had shot in the operating room when he was trying to take out Andre and Franco, had received several money transfers and visas for people to go into Afghanistan. Anna would do anything to protect Peter, and jumped to the conclusion that it was Liesl that had committed the crimes that Peter is being accused of by Robert Scorpio, (Tristan Rogers) Jason Morgan (Steve Burton) and Spinelli! Anna and Liesl have bad blood between them anyway, since Liesl was chasing after Cesar Faison (Anders Hove) all the years that he was in turn, chasing after Anna and obsessed with her, although Liesl obviously scored with him a couple of times, with his fathering her late son Nathan West (Ryan Paevey) and her daughter Dr. Britt Westbourne (Kelly Thibaud)!

In Monday’s General Hospital preview, Maxie is in the Metro Court with Dr. Hamilton Finn (Michael Easton) and Anna, and sadly says of Liesl, it was in front of her all along and she refused to see it, meaning Liesl’s being involved with the crimes that Spinelli keeps insisting that Peter committed! Spinelli also tells Jason that Peter framed Obrecht for his own crimes, and will try to tell Maxie, but she won’t listen to him. She will continue to stand up and support Peter, regardless of what proof Spinelli, Jason, and Robert try to put in her face!