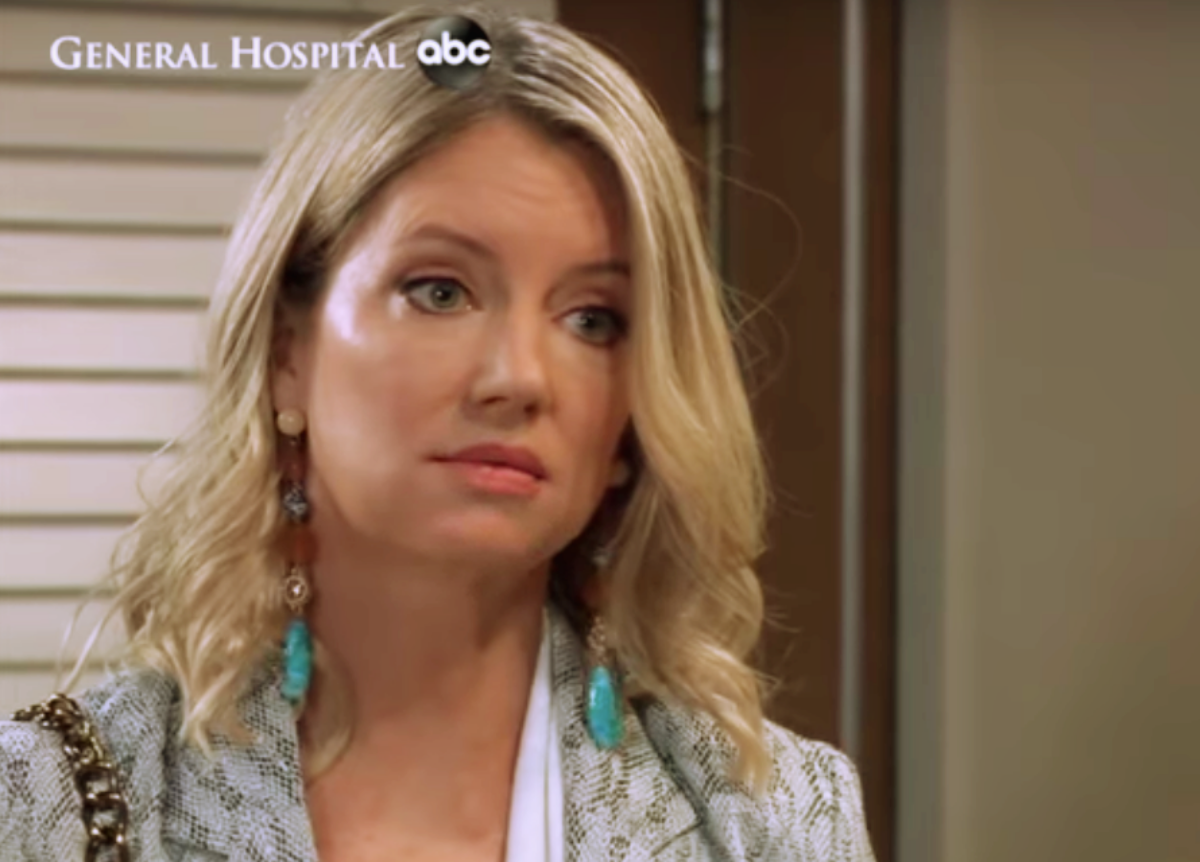 General Hospital spoilers tease that Nina Reeves (Cynthia Watros) may have changed her mind and decided to look for her long-lost birth daughter on her own after all, in upcoming GH episodes – and there were some huge hints in past Monday’s episode, March 9, 2020!

Sasha looked concerned. However, Nina does tell her that she thinks that they are on the brink of something big and exciting businesswise. Sasha agrees. Nina remains deep in thought after Sasha leaves. General Hospital viewers will recall that Nina thought Sasha was her long-lost daughter for nearly two years, and then found out that it was all a scam, albeit a well-meaning one, by her ex-husband Valentin Cassadine (James Patrick Stuart) to give Nina her heart’s desire, a child of her own, and Sasha had played the part – out of desperation for money to pay her sick grandma’s health care bills, who since had passed on.

Later in the episode, Willow Tait (Katelyn MacMullen) arrived at the Crimson offices, asking Nina for help with something. Nina was immediately and obviously bothered at her presence but asked what she wanted. Willow wanted Nina to do a exposé on Nelle Benson (Chloe Lanier) and run it in Crimson, hoping an article similar to the “Midnight In The Garden of Good and Ava” that Crimson ran on Ava Jerome (Maura West) would bring to public – and family court – attention how evil Nelle was and how she should never, ever, ever have custody of a child.

Willow hoped an exposé like that would help Michael Corinthos (Chad Duell) get sole custody of Wiley Corinthos (Erik and Theodore Olson). Nina couldn’t help with that, since Nelle is not a public figure like Ava is, so they have no reason to do a story on Nelle. However, Nina had sympathy for her because she had heard what happened with Wiley and that he wasn’t really Willow’s baby after all after she had bonded to him and thought he was for nearly two years. Nina had advised Willow to let Michael deal with Nelle, because the custody suit didn’t have anything to do with Willow. But Nina told her she knows how hard it is to turn those feelings off, and that women will do anything for their children.

General Hospital Spoilers: GH Fans Are Divided On If Nina Reeves’ Long Lost Daughter Exists And Who It Might Be

Many GH fans still think that Sasha may really be Nina’s daughter, and cite the strong family resemblance to Nina’s cousin, Dr. Britt Westbourne (Kelly Thibaud). Other fans thought that Ava had been given Nina’s baby to raise, and that Kiki Jerome (Hayley Erin) was her daughter – citing that when she was pregnant, Ava was reading a book for first time mothers; plus a vengeful, unbalanced Nina had put Ava into labor and ran off with Avery Corinthos-Jerome (Ava and Grace Scarola) and kidnapped her to Canada because Ava had an affair with Silas Clay (Michael Easton) who was Nina’s first husband, and later murdered by her mother, Madeline Reeves (Donna Mills).

That would have been the saddest outcome of all for Nina, having known Kiki and then finding out she was her daughter after she was murdered! Yet other GH fans are of the opinion that Willow Tait is Nina’s daughter – simply because of the friction between the two. That speaks of a lot of family dysfunction among fans, but it is a popular device among daytime drama writers to have birth parents and birth children hate each other at first glance!