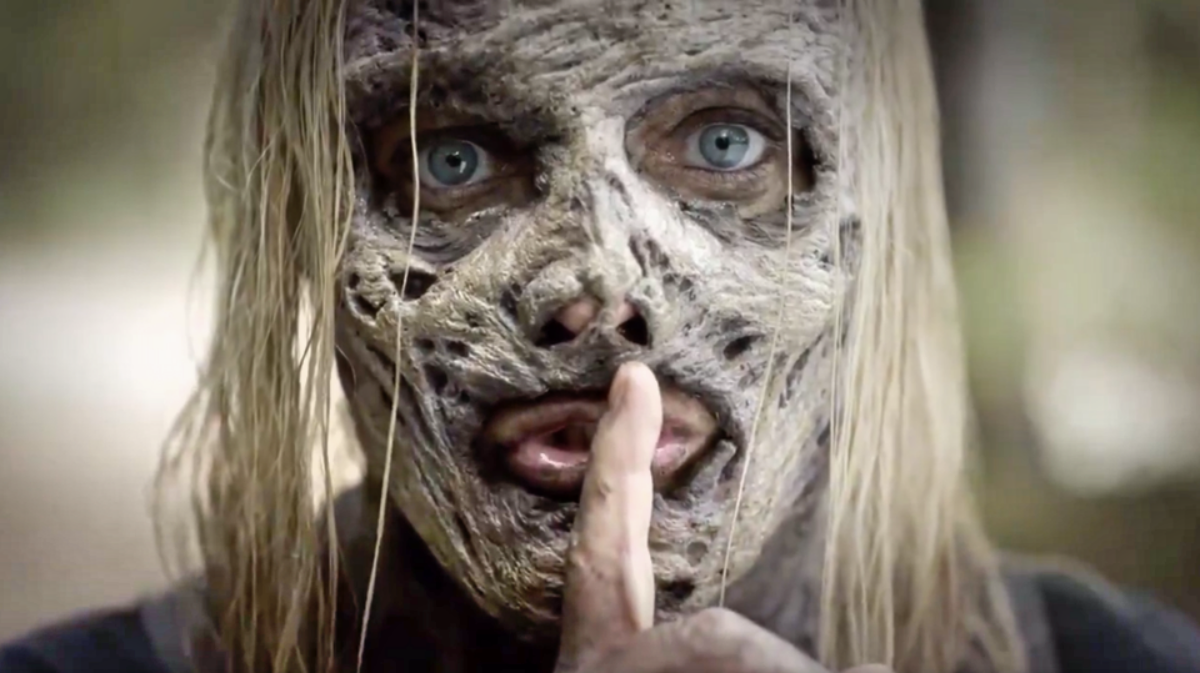 The Walking Dead officially made Negan a Whisperer and fans are freaking out. The showrunners gave Negan (Jeffrey Dean Morgan) a creepy flesh mask during his march to war alongside Alpha (Samantha Morton) and Beta (Ryan Hurst) of the Whisperers in Sunday night’s episode titled “Morning Star.” Negan wore his signature black motorcycle jacket and a mask made from the flesh of the dead.

He transformed himself into a member of Alpha’s pack as the Whisperers embarked on their assault against Hilltop. Morgan credited Walking Dead special effects makeup artist and director-executive producer Greg Nicotero. He even requested that Nicotero would cut a smile into the mask’s lips to make the mask appear “very Negan,” as reported by ComicBook.com. That’s because he didn’t like the mask at first.

“I hate the Whisperer mask! The great thing about it is, Nicotero texted me to warn me, to say, ‘Hey, Jeff…’ Because if you know me, I don’t like makeup, I don’t like anything [on my face],” Morgan said on an episode of Talking Dead.

“Don’t put a friggin’ mask on me, this is gonna be horrible. And then it crossed my mind that, ‘Can I make a suggestion?’ And Greg was like, ‘What?’ I’m like, ‘If I have to wear this thing, can we make Negan’s mask different from everyone else’s? Can we act like Negan cut a smile into it?’”

Since Negan Was Released From Alexandria’s Prison, He’s Not As Murderous Or Villainous As He Used To Be

Nicotero loved Morgan’s idea. In fact, he called it “the greatest idea.” “So I got this super cool mask, and sure enough, there’s this Joker smile cut into this zombie mask,” Morgan added. “And it was pretty cool.” Walking Dead fans lost their minds when they saw Negan in his very own Whisperer mask. This comes after Alpha inducted Negan into the Whisperers after having sex with him. It was the first zombie sex scene in Walking Dead history.

Since Negan was released from Alexandria’s prison, he’s not as murderous or villainous as he used to be. He killed the person that released him after that guy murdered a mother and son. Negan wanted Alpha to induct the people of Hilltop into the Whisperers, but the Whisperers see themselves as one of the Walkers. It’s like they become them. They even destroyed Hilltop and turned some of the inhabitants into zombies. Alpha has been following Negan’s advice, nonetheless. This could get him to change his mind and kill her when he sees an opportunity. For now, it seems like he’s on Alpha’s side. The Walking Dead airs on Sundays at 10 p.m. ET on AMC.