General Hospital Spoilers: Curtis Determined To Get The Truth Out From Jordan 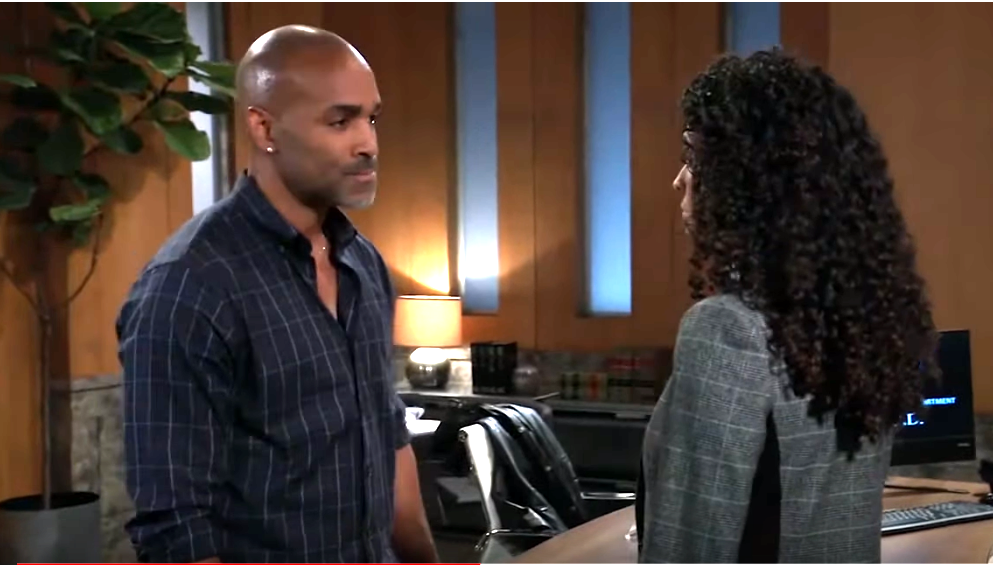 General Hospital spoilers tease that Curtis Ashford (Donnell Turner) will try to figure out what his wife, Police Commissioner Jordan Ashford (Briana Nicole Henry) is still hiding from him, in an upcoming episode of GH!

Curtis is a detective, and his detective skills are working overtime lately! Jordan is not being honest with him about what really is going on in several different situations, and she came down on him hard about he and Marcus Taggert (Réal Andrews) interfering in what should have been a police situation, not a rescue operation by a retired policeman (Taggert), a fired policeman, (Curtis) and a felon, Jason Morgan (Steve Burton)!

But this seems to be different – more personal. He understands that Jordan is upset over her former co-workers’ deaths, Curtis is upset with himself that he wasn’t able to prevent Taggert from being shot! Taggert had called Curtis for help when his daughter Trina Robinson (Sidney Mikayla) and her date Cameron Webber (William Lipton) were kidnapped, and now he goes to the memorial and gets blasted by her for being the reason for Taggert’s death; and Jason, he came because Elizabeth Webber (Rebecca Herbst) had called him, and then Franco Baldwin (Roger Howarth) had talked her into getting the police involved – but if Curtis and Jason hadn’t gotten there, the outcome by the time the police arrived would have been much, much, worse with probably both Taggert and the teens dead at the scene and all of Cyrus Renault’s (Jeff Kober) henchmen having been in the wind!

Jordan is distracted and hiding something and it seems personal – but she won’t let Curtis in on the “secret” and it’s probably because she doesn’t want him involved trying to help – she doesn’t trust his abilities, apparently!

Curtis has his suspicions – even though he and Jordan had a conversation about her son, TJ Ashford (Tajh Bellow) walking out of the proposal dinner he had with Molly Lansing-Davis (Haley Pullos) after she turned him down, not because of anything personal, but because she doesn’t believe in or trust the institution of marriage itself, that Jordan is worried about much more than TJ nursing a broken heart and wounded pride.

She told him that she had received a text from him and he just needed space, but if Renault had targeted Taggert through kidnapping Trina, he could have targeted Jordan by kidnapping TJ! But Jordan doesn’t want to let Curtis in on her fears that TJ is missing because Renault’s men got to him – and he knows why. She wants to handle everything herself and with her police, she doesn’t want “civilians” involved. Curtis is starting to feel like Jordan is pushing him away emotionally – and won’t confide in him. This takedown of Cyrus by Jordan’s DEA takedown team was years ago, and she is the only survivor!

Jordan needs Curtis not only to be her husband but her bodyguard, as far as he is concerned! But she continues to push him away – why? Could she be distancing herself because she knows she may be killed and doesn’t want him to be devastated, or is it out of a sense of pride and not wanting or needing his help?