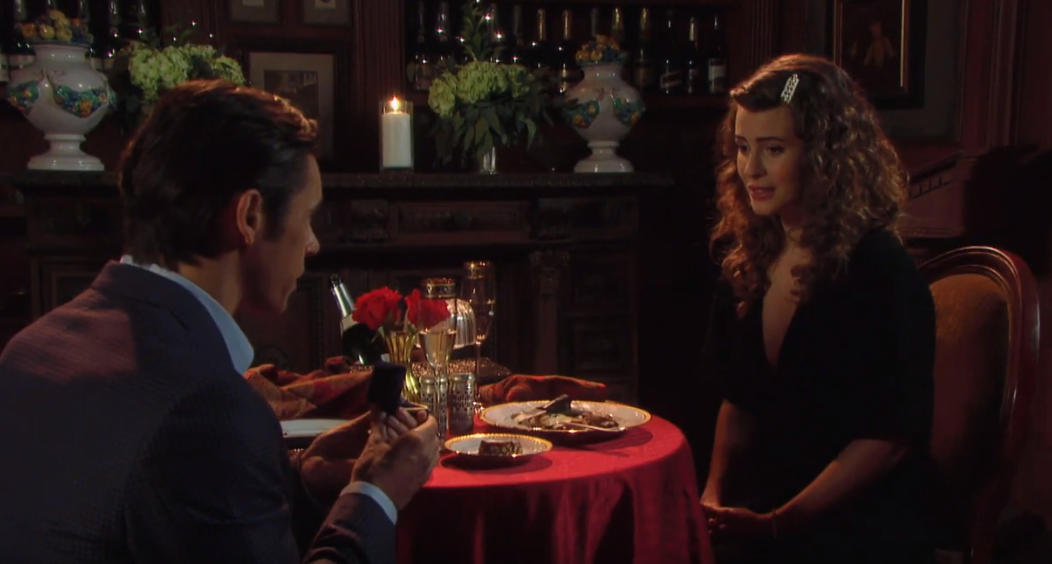 Days of Our Lives spoilers reveal a lot is happening in Salem. The weekly promo clip shows John Black (Drake Hogestyn) making a death threat, Orpheus (George DelHoyo) is alive, Xander Cook Kiriakis (Paul Telfer) proposes and Nicole Walker (Arianne Zucker) gets into a catfight. Find out the details on what to expect in the upcoming week.

DOOL spoilers reveal that John is desperately searching for Dr. Marlena Evans (Deidre Hall). Stefano DiMera (Stephen Nichols) and Dr. Wilhelm Rolf (William Utay) are holding her hostage and John knows “Doc” is in danger. What he doesn’t realize is that they have inserted a brain chip to make her more subservient to Stefano. There is speculation that the procedure could be a failure, but Marlena is doing her best to fake it.

In the weekly promo clip, John is furious and desperate. He says out loud that he wants Stefano dead. Will he make good on that threat?

It has already been confirmed that Orpheus is back. It turns out that Evan Frears aka Christian Maddox (Brock Kelly) is his son. Rafe Hernandez (Galen Gering) learns that the supervillain is alive. Soon, others will also learn the news, but will they be able to outsmart and outpower him? He always seems to be one step ahead and he has taught Evan to do that as well. Luckily, Evan is quite as smart or capable as his dad, which means he’ll get caught red-handed soon enough.

Days of Our Lives spoilers reveal that Nicole starts a fight with Kristen DiMera (Stacy Haiduk). It turns into a vicious brawl and once again, a man has to get in between them to break it up. What exactly are they fighting about this time? Does it have to do with Brady Black (Eric Martsolf) or perhaps baby Mackenzie “Mickey” Horton (the May twins)?

“Xarah” fans will be happy about this one. The promo clip includes a scene in which Xander pulls out all the stops to create a romantic evening for Sarah Horton (Linsey Godfrey). There are red roses everywhere and he gets down on one knee to propose. She is smiling, so we think Sarah might say yes. But could something get in the way of their happily ever after?

Which storyline are you looking forward to the most? Do you have any predictions on what’s coming up for your favorite characters?

Days Of Our Lives (DOOL) Spoilers: Jack Warns Abigail Not To Make Him Choose Between…

Days Of Our Lives (DOOL) Spoilers: Theo Reveals He Still Has Feelings For Ciara To…

Days Of Our Lives (DOOL) Spoilers: Jack Tries To Get His Daughters To Make Up And…