General Hospital Spoilers: Jordan Tells Sam To Back Off The TJ Search 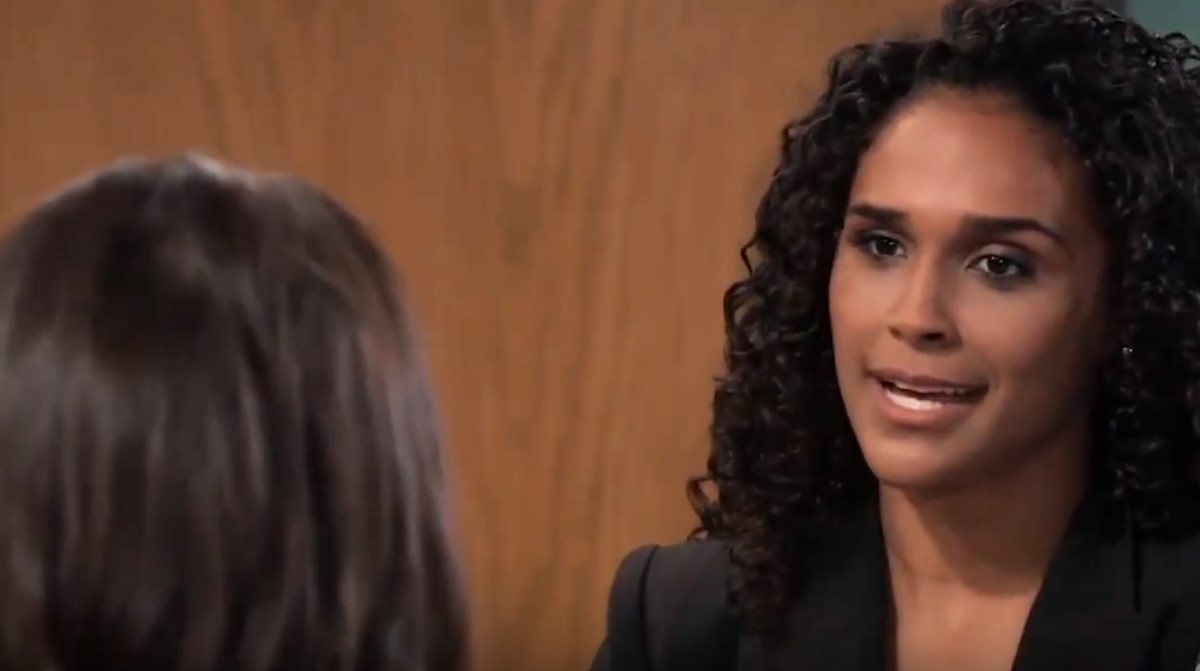 General Hospital spoilers tease that Jordan Ashford (Briana Nicole Henry) will tell Sam McCall (Kelly Monaco) to back off the search for TJ Ashford (Tajh Bellow) in an upcoming episode of GH!

As General Hospital viewers will recall, Jordan confronted Cyrus Renault (Jeff Kober) in Pentonville Prison and found out that her son TJ had indeed been kidnapped at Cyrus’ request, and received a text on her phone of him bloody and beaten, and she got another text later at home, telling her to be alone and so she had to chase out both her husband, Curtis Ashford (Donnell Turner) and Auntie Stella Henry (Vernee Watson) with an excuse of needing some space, after which she got a knock on her door, which turned out to be of all people, Harmony Miller (Inga Cadranel), who had been forced to work for Cyrus or harm would befall Willow Tait (Katelyn MacMullen) and Harmony gave her a burner phone which wishes to contact her, and she in turn contacts Cyrus – in other words, Harmony is the go-between between Jordan and Cyrus!

So, if Sam is snooping around and trying to help find TJ, it could mean big trouble for both Jordan and TJ! Jordan cannot endanger TJ and if Sam knew the situation she would understand, but she has promised Molly Lansing-Davis (Haley Pullos) that she would try to find TJ, and she will likely enlist Damian Spinelli (Bradford Anderson) as well. Spinelli can trace calls, even to and from burner phones, and that is another big reason that Jordan will tell Sam to back off her search! Jordan knows she was in big trouble when all her ex-DEA partners who took down Cyrus with her were killed, but she won’t ask for any help and now she is in even bigger trouble, and either she or TJ or both of them could die if she messes up or involves anyone else!

Does Jordan Ashford Think She Can Stop Cyrus Renault By Acting Like A Sort Of Double Agent?

Does Jordan think she can stop Cyrus by acting as a sort of double agent, to infiltrate and take down his network on the outside? General Hospital viewers will recall that Harmony had warned her that Cyrus has very “long arms” and apparently they go both ways, inside and outside of the prison walls. Mayor Laura Collins’ (Genie Francis) insistence on putting Cyrus in solitary confinement hasn’t helped one bit to stop his communication with the outside. He obviously has a whole lot of dirty cops and prison officials, parole board members, and possibly even higher up than that level working for him!

The corruption is many, many, layers deep! Jordan doesn’t yet know exactly what type of “work” she will be doing, although she can make an educated guess that will include eliminating Sonny Corinthos (Maurice Benard) whether by arresting him and Jason Morgan (Steve Burton) or by other, less legal methods! Sonny and Jason are Cyrus’ biggest threat and he will want them eliminated in any way possible, and it will probably be a kill order. Will Jordan be forced to restore law and order by breaking the law?