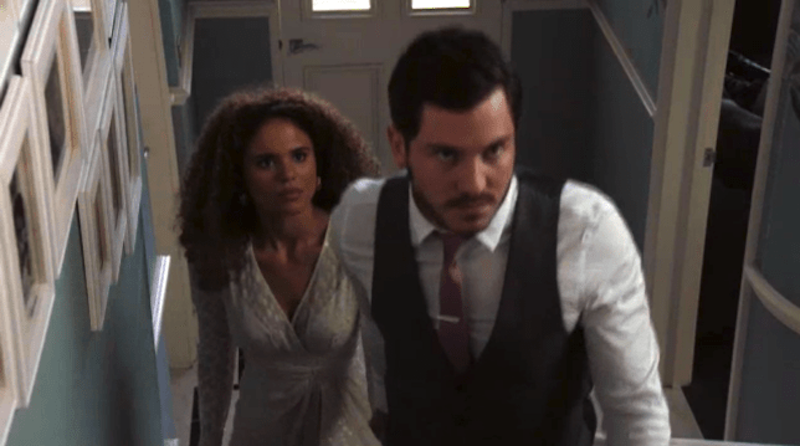 EastEnders spoilers suggest that fans may have been left speechless from the episode that aired on Thursday the 12th for most viewers and Friday the 13th for other viewers. The viewers were greeted by many flashback scenes of Whitney Dean (Shona McGarty), who is still on a hunger strick. Viewers were also disturbed by the abuse that Chantelle Atkins (Jessica Plummer) went through in the episode.

Viewers knew about the abuse that Chantelle was going through, but it seems like bad went to worse as Mitch Baker (Rodger Griffiths) found out about Gray Atkins (Toby-Alexander Smith) losing his job. When Gray found out Mitch new, he let his anger out on Chantelle, thinking that she had told Mitch about him losing his job. This time seemed worse than ever as Chantelle could barely get up after the abuse she went through. To add fuel to the fire, as Gray left home, he was praised by the others for representing Whitley without asking for pay. There he found out what viewers already knew that Mitch found out about him losing his job all on his own. Viewers were upset that Chantelle’s parents were praising him minutes after he had abused Chantelle.

'90 Day Fiancé: Before The 90 Days': Is David’s Girlfriend Lana Real Or Is He A Money Ticket For A Catfisher? #90DayFiance https://t.co/ejMaOWkYsu

At the same time, as the Chantelle scene, viewers got more Whitley scenes as well. Whitley is seen still refusing her meals and has begun to hallucinate. She relived her childhood by talking to a younger version of herself in order to try and get her from making the same decision as she did. It was a disturbing scene to watch for viewers as they had to watch Whitley become weaker and weaker with each hallucination. The scene ended with her falling to the floor and left fans worried for her.

Each of the scenes left fans speechless as they end the show leaving more questions than answers. Since the next time viewers saw Chantelle, she could barely get off the ground. As for Whitley, she clasped on the floor after having no food or water for days or weeks, which leads viewers to wonder if they killed off the two characters.

What do you think? Will Whitley and Chantelle be okay? Were you disturbed by the episode? Watch EastEnders from Monday and Friday at 8 pm and Tuesday and Thursday at 7.30 pm on BBC One to find out what happens next.