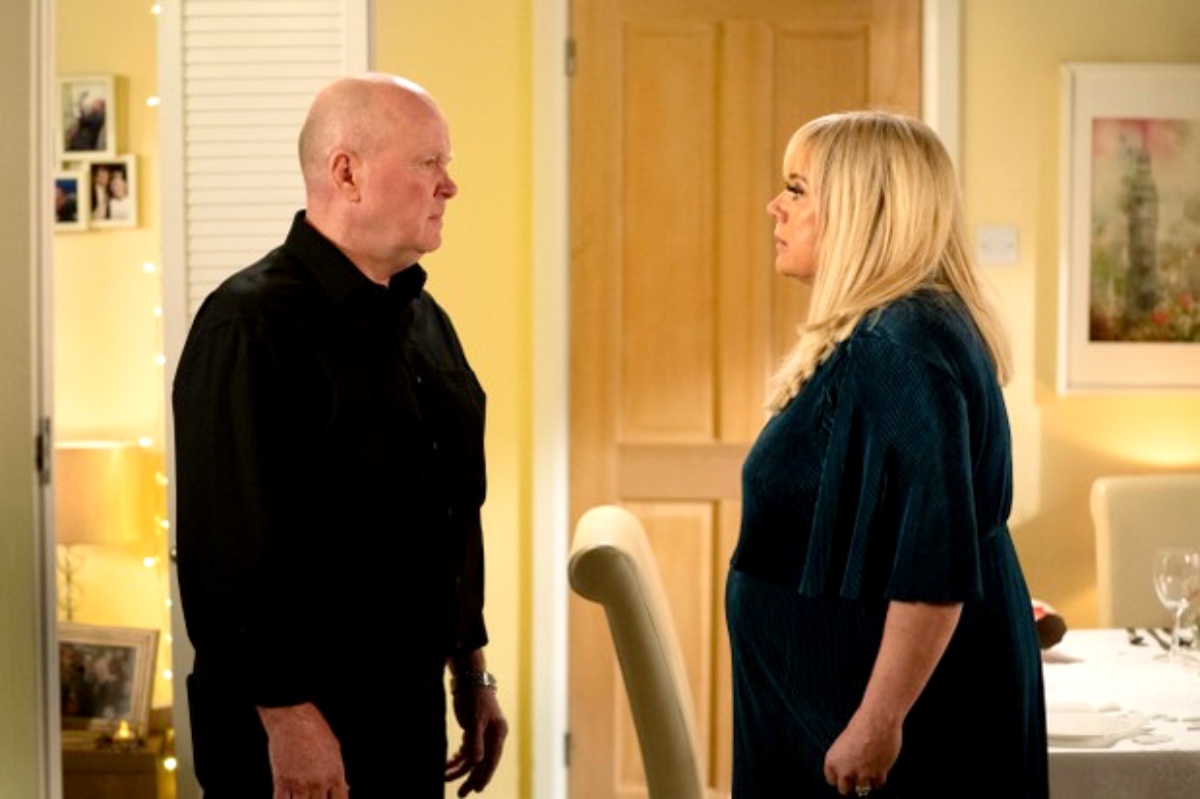 Eastenders spoilers for the week of March 23 reveal Phil Mitchell (Steve McFadden) will pop in at Dennis Rickman’s (Bleu Landau) funeral. Sharon Mitchell (Letitia Dean) will end up having an explosive meeting with her ex. Meanwhile, Linda Carter (Kellie Bright) relapses and is caught by her mother-in-law, as usual. After confessing to Michael “Mick” Carter (Danny Dyer), they make a big decision.

Despite banning the entire Mitchell family from Dennis’ funeral, some of them attend anyway. The dead boy’s mother is going through intense grief. However, Eastenders spoilers indicate the situation gets even worse when Ben Mitchell (Max Bowden) shows up at the wake.

However, Ben won’t be the only Mitchell that Sharon will be forced to deal with on Dennis’ funeral day. She runs smack into Phil, whose presence stuns Sharon.

Linda tells Mick that she’s ready to go back to work full-time. But is it too soon? Despite her best intentions, she is tempted by Shirley Carter’s (Linda Henry) vodka. Can she stay strong and resist the urge to drink or is the temptation just too much?

Pavinder “Vinny” Panesar (Shiv Jalota) vents his frustrations by creating graffiti. Dotty Cotton (Milly Zero) decides to join him. It will be the start of a friendship between the two characters. Meanwhile, Habiba Ahmed (Rukku Nahar) is touched during a conversation with Jagvir “Jags” Panesar (Amar Adatia).

Eastenders spoilers for Tuesday reveal Sharon will try to get away from Phil. However, he is determined to talk to her. He refuses to give up and even breaks down a door in order to get to Sharon. She begins firing off insults at him and Ian Beale (Adam Woodyatt) calls the police.

Tuesday’s episode will show that Shirley catches Linda drinking. She gives the recovering alcoholic a hard time. Hearing a commotion, Mick enters the room to see what’s going on. Not being able to get away with lying, Linda admits to her husband that she had a drink.

Also, Dotty is chased by a man after stealing his wallet. Peter Beale (Dayle Hudson) tries to help by playing peacemaker. Later, Dotty is sleeping on the couch and Ian goes through her bag. He finds the keys to the Arches and it’s his opportunity to get rid of the evidence.

Eastenders spoilers reveal Ian now has the phone with the message on it. He feels guilty, but refuses to come out with the truth. So, he continues with his cover-up, but Sharon almost catches him. He destroys the phone that contained Dennis’ message and has a tense discussion with Dotty. Ian ends up being shocked by her next move.

Also, Linda suggests that she stop working at the bar. The Carter family has a lot to discuss and it is teased that they make a big decision, but what could it be?

On Friday’s episode, Dotty will feel stressed to the max. The tension is taking a toll on her. Vinny senses that she is going through a struggle. He encourages her to talk to him about what is going on, but will she reveal what is going on?