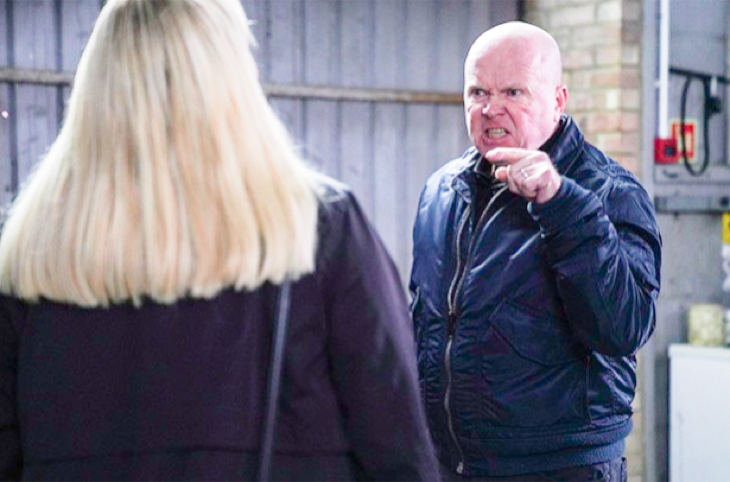 Eastenders spoilers reveal Phil Mitchell (Steve McFadden) makes a surprise entrance on the day of Dennis Rickman’s (Bleu Landau) funeral. He insists on speaking with Sharon Mitchell (Letitia Dean). However, she isn’t interested in talking and when he kicks down a door to get to her, Sharon grabs a knife and lunges at him. Will the grieving mother kill Phil, who she blames for Dennis’ death?

The day of Dennis’s funeral arrives and Sharon has banned any of the Mitchell family from attending. At the wake, she is livid when Ben Mitchell (Max Bowden) shows up. She decides to leave and is stunned when she encounters Phil. Not only is he the man she was married to, but she holds him responsible for the death of her son.

Eastenders spoilers reveal Phil is determined to talk to Sharon. However, she has no intention of speaking with the man. Undeterred, he keeps chasing her around everywhere. Eventually, Sharon locks herself inside a bedroom at Ian Beale’s (Adam Woodyatt) house. Phil isn’t going to let anything stop him from getting to Sharon, including a door. He then kicks it down and comes face-to-face with the grieving mother.

As he steps forward, she grabs a knife and lunges at him.

Ian decides he should call the police before things get too out of control. Although, it clearly was already out of control when doors were kicked down and the knife-lunging event began. Of course, Phil disappears before law enforcement gets there. When he rushes off to avoid being cornered by authorities, he finds a place to hide.

After the police leave, Sharon goes to find Phil. While she is looking for him, Phil is tempted to take a drink, but Ben urges him not to. Eventually, Sharon locates him, but it is unclear what happens after that. Will she try killing him again as payback for his role in Dennis’s death? Or is she there to actually talk?

Could Sharon discover Ian’s role in Dennis losing his life? Or perhaps, Sharon will understand that Phil had no idea his actions would indirectly result in the tragedy. If so, then maybe they could bond over honoring Dennis’ memory. To find out, fans will have to keep watching the British soap opera.