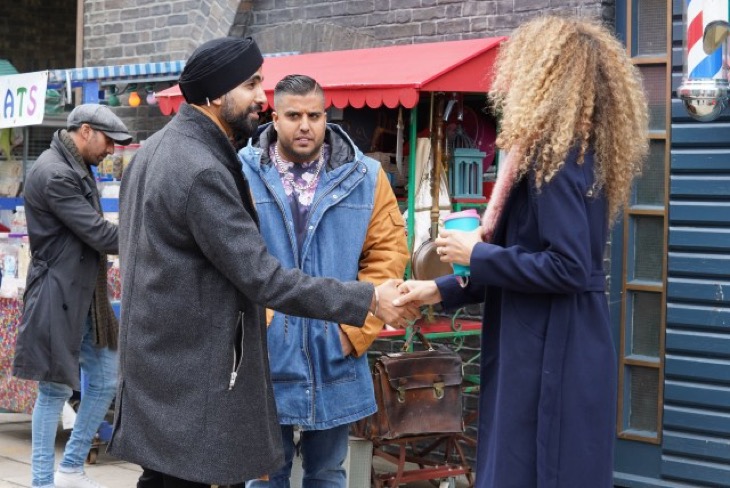 EastEnders Spoilers hint that Kheerat Panesar (Jaz Deol) and Chantelle Atkins (Jessica Plummer) may be heading for a potential romance in the near future. It seems that Chantelle and Kheerat will continue to grow closer to each other as they continue to work together. That in combination with Chantelle’s troubles with Gray Atkins (Toby-Alexander Smith), she may be headed towards a romance with Kheerat. However, will Kheerat be able to help Chantelle from the abuse she is facing at the hands of Gray?

EastEnders Spoilers: Chantelle is Trapped in an Abusive Relationship

Chantelle has been stuck in an abusive relationship with her husband, Grey, who has been physically abusive towards her. Recently, things have been getting worse over time, with Gray’s abusive behavior escalating over time. However, with Gray’s recent actions of getting Whitley Dean (Shona McGarty ) out of prison on bail, everyone has seen him be a hero. This will make it harder for her to get out of the situation that she is in since no one will realize that she is being abused by him. However, with her deciding to work with Kheerat, she may grow a connection with him that may lead to them wanting to be together.

However, Gray may become suspicious even before this happens and may become more violent towards Chantelle. This may lead to Kheerat noticing that Chantelle is being abused by Gray and may confront him about it or try to confront him about it. Could Kheerat be the one to expose Gray’s behavior to the rest of the Villiage, including Chantelle’s family, who recently praised Gray for his selflessness in helping Whitley at no cost to her?

If so, then things will not end well for Gray, but Chantelle will be saved from the fate that viewers are fearing. Chantelle may face if she does not get away from Gray before his violence leads to her getting seriously injured or even die.

It would be interesting to see Chantelle in a new, more secure, stable, and healthy relationship. What do you think? Will Chantelle and Kheerat start a relationship with one another? Will Kheerat help Chantelle out of her abusive relationship? Watch EastEnders from Monday and Friday at 8 pm and Tuesday and Thursday at 7.30 pm on BBC One to find out what happens next.