The Bold and the Beautiful Spoilers: Katie And Ridge In Terrible Shock After Seeing Bill & Brooke Kiss Video 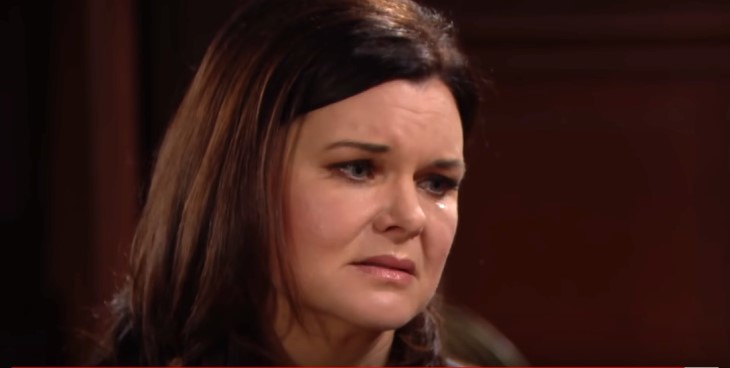 Viewers of The Bold and The Beautiful will recall that Quinn uploaded the video that Shauna Fulton (Denise Richards) took on her cell phone of Brooke and Bill Spencer (Don Diamont) passionately kissing in Hope Logan’s (Annika Noelle) cabin, but Donna Logan (Jennifer Gareis) figured out how to delete it from the digital frame that Ridge had given Brooke as a gift. Brooke thought she was safe, but she and Donna didn’t think ahead to if Quinn still had the video, even though Brooke had immediately gone to confront her about it.

This is the same day as the party is to take place, but earlier in the day so there is a lot of planning that will need to be done so perhaps it was the rush to get it deleted that caused the two sisters to maybe not be a detail-oriented as they should have been, or maybe they thought that the digital frame removes the original photo from the cell phone, which it does not, it only copies it just like when someone sends a photocell phone to cell phone.

Brooke had not been able to find a manual for the digital frame and Donna did a lookup on the internet from her phone and deleted everything from the frame, after which Brooke had put it in a drawer. The last thing that either sister wants is for either Katie, who just recently got back together with Bill and who also recently survived a brush with death, thanks to Flo Fulton (Katrina Bowden) donating one of her kidneys to save her life, or Ridge, who just reconciled with Brooke, to ever see that video or even have a clue that this passionate kiss had happened between Brooke and Bill.

B&B Spoilers – The Party Has Started, The Party Guests Arrive, And Quinn Forrester Announces That She Has A Surprise

Friends and family have arrived for the party, including Eric Forrester (John McCook) and Brooke’s daughter, Bridget Forrester (Ashley Jones) who has flown in from New York City. Donna, who knows the dark side of Quinn better than anyone and believes she is not stable nor good for Eric, gasps in dread as Quinn suddenly announces that she has a surprise for the happy couple! She realizes that everything happened so fast with their frantic rush to delete the video from the digital photo frame that Quinn might have another copy!

Now, Quinn is not going to just pop this surprise on Eric along with the rest of the guests – this is likely something Eric planned and Quinn is playing hostess so she announces it, but popped the real surprise into the presentation. Perhaps it is a presentation showing the same photos celebrating the romance and love between Ridge and Brooke over the years, just as Ridge had shown in the frame, with the video of Bill and Brooke making out in Hope’s cabin inserted into it by Quinn!

Quinn will act as shocked as everyone else when it begins showing, and Donna will intervene, as will Brooke, by accusing Quinn of setting this whole thing up but no one will want to believe them – because the evidence is there before their eyes! But poor Katie will get the worst of the shock and likely start to cry – with Ridge displaying the worst of the anger he has ever experienced against Brooke in front of everyone!