General Hospital Spoilers: How Long Before Elizabeth Tries To Get Britt Fired? 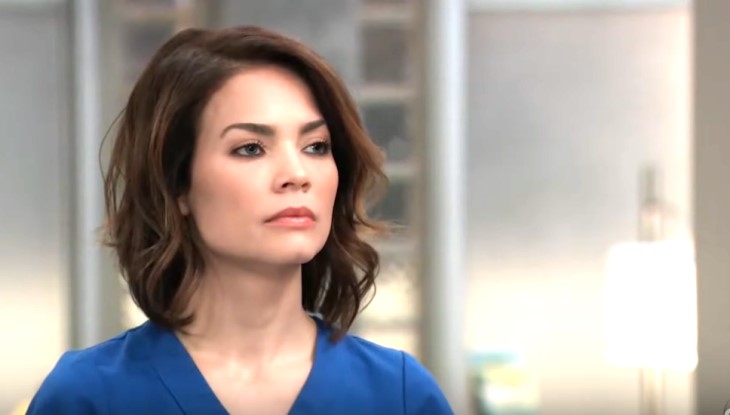 General Hospital (GH) spoilers suggest that Elizabeth Webber (Rebecca Herbst) could attempt to get Britt Westbourne (Kelly Thiebaud) fired from her new position at GH. Viewers may recall that recently, Elizabeth witnessed (and joined in) a vicious argument between Britt and Nikolas Cassadine (Marcus Coloma).

As GH viewers everywhere knew a conflict between Elizabeth Webber and Britt was on the immediate horizon when Britt walked into the nurse’s station at General Hospital. As a fellow nurse, Felix DuBois (Marc Samuel) mutters upon Britt’s entrance, “Good lord, the Britch is back.” In essence, Felix summed up the situation perfectly.

From that moment, both Elizabeth and Felix went on a rant, listing sarcastic reasons Britt just couldn’t really be working for GH again. From suggesting that the board would never renew Britt’s license to obstruction of justice to the theft of human embryos, Elizabeth and Felix scorched Britt’s first day back on the job.

Although Britt made it clear that she was hired temporarily to cover for another doctor, her clarification of the terms did nothing to assuage the shock or anger Elizabeth and Felix displayed. Felix even implicitly threatened Britt, telling her that he gave her two weeks, four tops before she was fired. Of course, there are those who will argue that Felix simply meant that Britt would hang herself by becoming involved with an intern in a linen closet, or by stealing embryos.

However, the animosity toward Britt was flowing strong with Felix and Elizabeth. Thus, whether or not Felix was actually hinting at efforts to get Britt fired is irrelevant. It’s a sure bet that even if this confrontation was the only thing that happened to Britt that day, it would be enough for Elizabeth and Felix to begin working toward her getting fired.

Literally two seconds after verbally jousting with Elizabeth and Felix, Britt watched her former fiancé, the Good Cassadine come waltzing into the nurse’s station. Shocked, Nikolas perhaps expected an entirely different welcome than the one he received. To everyone’s complete surprise, Britt immediately assaulted Nikolas then and there. In front of all present, Britt hauled off and slapped Nikolas full in the face.

Britt then proceeded to castigate him for his role in hurting his son, Spencer Cassadine (Nicolas Bechtel). GH fans may agree to a small amount of surprise that Elizabeth Webber came to Nikolas’s defense when she immediately told staff to call for security and sarcastically suggested that Britt “never did anything terrible in her life.”

The sparks flew and Britt immediately spit out a venomous “Back off, Miss Nurse Perfect! ”

GH viewers may have had a bit of fun watching the cattiness between Elizabeth and Britt. However, most might also agree that Elizabeth has a few legitimate reasons to be wary of, and disgusted by, Britt’s presence. While Elizabeth may be watching like a hawk for any excuse to tattle on Britt and get her fired, it’s likely that Britt is going to keep her nose clean this time around. Who knows, she might be good just to spite her former colleagues!