‘The Bold and the Beautiful’ Spoilers: Quinn Aims For Double Shot – Brooke and Bill Targeted 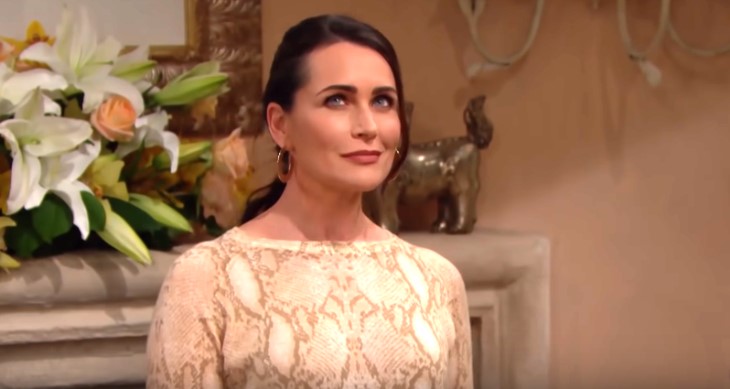 But a video that Shauna Fulton (Denise Richards) captured of Brooke and Bill, embraced in a passionate, extended kiss, has given Quinn the ability to take a double shot at two longtime targets.

The Bold and the Beautiful Spoilers: Sally’s Scheme Might Fail – Will It Turn Into Revenge?

With logic clouded by dastardly enthusiasm, Quinn is unknowingly threatening the stability of three relationships. The third pairing would be her marriage to Eric Forrester (John McCook), which is known as ‘Queric’.

Brooke knows that she’s in a bad position, but plans to fight her way out of it. Rather than allow Quinn to blackmail her with the ‘Brill’ kissing video, Brooke plans to tell Ridge what happened.

That’s a risky strategy for a number of reasons. The first involves the shaky nature of the perceived ‘Bridge’ comeback story. That hopeful storyline changes in an instant when Ridge Forrester (Thorsten Kaye) learns that ‘Logan’ was smooching with his mortal enemy in the cabin.

Beyond the above, Bill is married to Katie Logan (Heather Tom). Breaking Katie’s fragile heart, as Quinn dubbed the act with great snark, is also what Brooke risks if she comes fully clean to Ridge.

As hardcore B&B fans recall, Ridge felt that he had to tell Brooke what happened with Shauna in the recent past. Richards’ character came onto him very strong. He resisted at first but eventually relented.

Shauna has fallen for Ridge, but his interest in Quinn’s friend didn’t go beyond kissing, which happened on multiple occasions. After ending the advance toward ‘Shidge’, Ridge told Brooke what he’d done.

Brooke’s situation is different, as Bill is a former flame and a longtime enemy of her husband’s. Shauna is a new threat that was put down by Ridge, making Quinn’s video a potential couple’s game-changer.

The Bold and the Beautiful Spoilers: Quinn Hopeful She Can Take Down Brooke With Dirty Revenge Plan https://t.co/SkZtki3C1z pic.twitter.com/8fTRU5ttq3

The Bold And The Beautiful Spoilers – Queric Surely Not Invincible

Quinn believes that the love she and Eric share can overcome any exposure that might take place. Brooke is sure to not only tell Ridge what she did with Bill but also to inform Eric about his wife’s actions. Quinn will likely think that she can talk her way out of that proposed outcome.

Viewers know that Eric implored Quinn, on more than one occasion in recent weeks, to stop harassing Brooke. She didn’t, plus Brooke doesn’t even know that Sofer’s duplicitous character spiked her juice bottle with alcohol last month. That reveal could prove to be overwhelming for McCook’s character, potentially leading to a ‘Queric’ split.