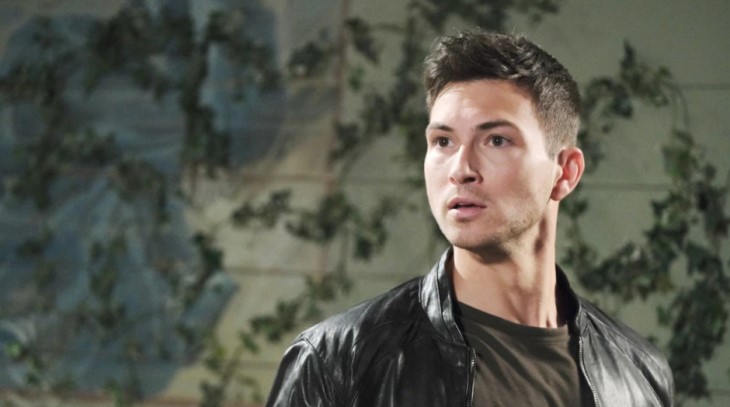 Days of our Lives spoilers reveal that Ben Weston (Robert Scott Wilson) is out of prison, but he might not be out of harm’s way. He also may not be right in the head after suffering through his death chair ordeal!

At this time all is champagne and roses, um make that Chinese takeout and sex, between Ben and Ciara Brady (Victoria Konefal). Ben has been released from prison, he’s had a nice scrubbing and shave from his girlfriend, and the future looks bright.

Days of Our Lives Spoilers: Is Marlena Pretending To Be Under Stefano’s Control To Buy John Time?

Poor Ben has been through a lot in his short, tragic life. His dad is a lowlife, his sister Jordan Ridgeway (Chrishell Hartley) has tried to kill Ciara, and Ben himself has been accused of killing Jordan.

At this point in time, Ben has been released from prison, as another man, Christian Maddox (Brock Kelly), has confessed to killing Jordan.

Following his release, Ben and Ciara had a well-deserved reunion which included take out food and a naughty romp in the shower together. Even their fortune cookie fortunes declared their futures to be full of sunshine and promise.

Nonetheless, explosive show spoilers reveal that Ben’s main enemies, Orpheus (George DelHoyo) and Christian are going to do their best to have Christian’s conviction overturned, possibly replicating Ben in the murder

And Cin shouldn’t expect smooth sailing going forward as not everyone loves Ben as much as Ciara does.
He’s in the clear now, but his past is still riddled with plenty of murderous action. Ciara’s uncle, Victor Kiriakis (John Aniston) has tried to have him killed in the past, and there’s no guarantee he won’t try again.

Days of our Lives Spoilers – Will there be any lasting after-effects from Ben Weston’s death chamber experience?

After all, Ben cannot erase his past as the Necktie Killer. Is it possible he could return to form and regress to his past evilness?

Days of Our Lives Spoilers: Xander and Sarah Set A Wedding Date While Abigail Tries To Save Chad From Stefano’s Spell https://t.co/y5fXICdbUx pic.twitter.com/hCEHmlrmGy

Ben went through quite a life and death routine while he was in the death chamber. He was administered a lethal injection and subsequently had to be revived in quite dramatic fashion.

Could all of that biological and chemical trauma have played havoc on his brain? Not to mention the psychological trauma he endured in prison for months.

Is it possible that all of the trauma will have a latent effect on Ben, possibly causing him to revert to old form?