EastEnders Spoilers: Will Gray Cheat On Chantelle – Show Hints At Romance With Whitney 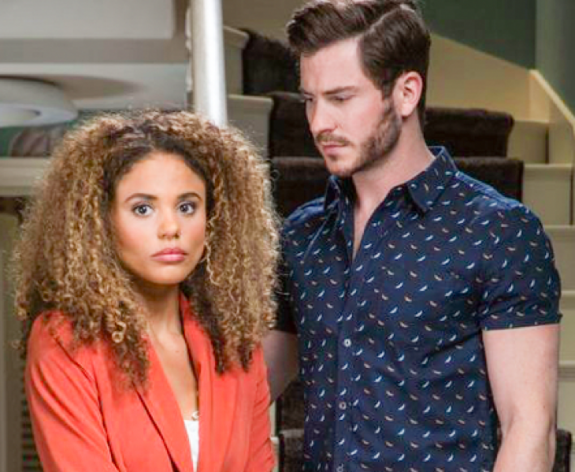 EastEnders spoilers hint that Gray Atkins (Toby-Alexander Smith) may hurt Chantelle in a new way by cheating on her with Whitney Dean (Shona McGarty). EastEnders has shown signs that could lead viewers to believe that Gray may comfort and grow closer to Whitney after helping to get her released on bail from prison based on the new evidence that he was able to find while searching her room.

However, the two of them growing closer may lead them to connect to each other in a romantic way causing Gray to cheat on Chantelle. Could their relationship become something more than just friends but instead become romantic?

Gray has been working on the Whitney case ever since she was arrested for the death of Leo King (Tom Wells), who had been stalking her for quite some time. However, with no proof of this, it became harder for Gray to get Whitney out on bail. However, after finding out that she was being watched inside of her own home, Gray used this as evidence that she was being stalked and was able to get her out on bail. Whitney is still having some problems with what happened to her and has found it hard to process how she was being watched in her own home. This would make her more vulnerable than usual.

Since Gray has been around, it may mean that they may find each other in their arms. Gray has been having problems in his relationship as well. With him lashing out and taking his anger out on Chantelle Atkins (Jessica Plummer) in a violent way.

Chantelle has been having to put up with abuse at the hands of Gray, with the last abusive episode being the worst. It would be no surprise that Gray would take things further and get lost in the moment with Whitney while also taking things too far.

It seems that Gray may become unfaithful in his relationship with Chantelle by cheating with Whitley. What do you think? Will Gray cheat on Chantelle? Will Chantelle leave Gray if he becomes unfaithful? Watch EastEnders from Monday and Friday at 8 pm and Tuesday and Thursday at 7.30 pm on BBC One to find out what happens next.